The Benefits and Disadvantages of 3D Printing Your Prototypes

The Benefits and Disadvantages of 3D Printing Your Prototypes 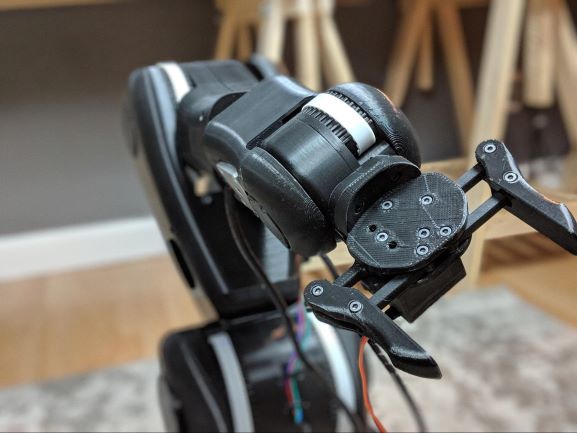 In this next chapter to this series on prototyping, learn all about 3D printing and its benefits to your project!

With a prototype CAD design finished, or at least some aspect of a product design finished for prototyping purposes, there are a variety of different technologies that can be used to create physical copies of the CAD design.

As Iâ€™ve mentioned, holding a physical object in your hand lends insight to your design that is just not possible in two dimensions. One of the most accessible prototyping technologies for small teams is 3D printing. 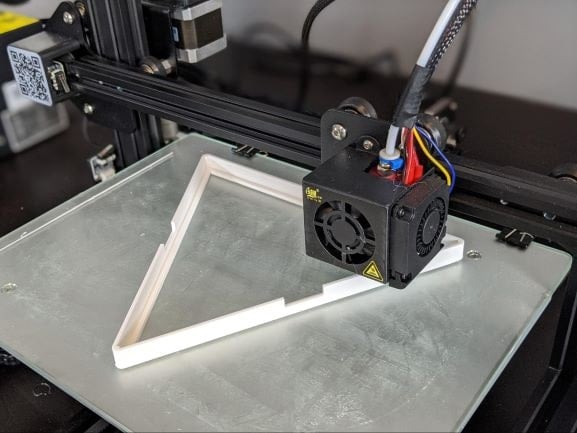 This is a Creality CR-10 Mini desktop 3D printer.

The video below, by professional 3D printing companies Proto3000 and Stratasys, shows how a design team uses 3D printing to get a better understanding of their design for a set of wireless headphones with a case.

The 3D prints in the video were made with an extremely high end 3D printer, but they could have been produced in a consumer desktop 3D printer as well, albeit at a lower fidelity.

Desktop 3D printers produce 3D objects from various kinds of plastic. Even though most 3D printers only use plastic to build objects, there are many different types of plastic from which designers can choose, each with its own set of benefits and shortcomings: 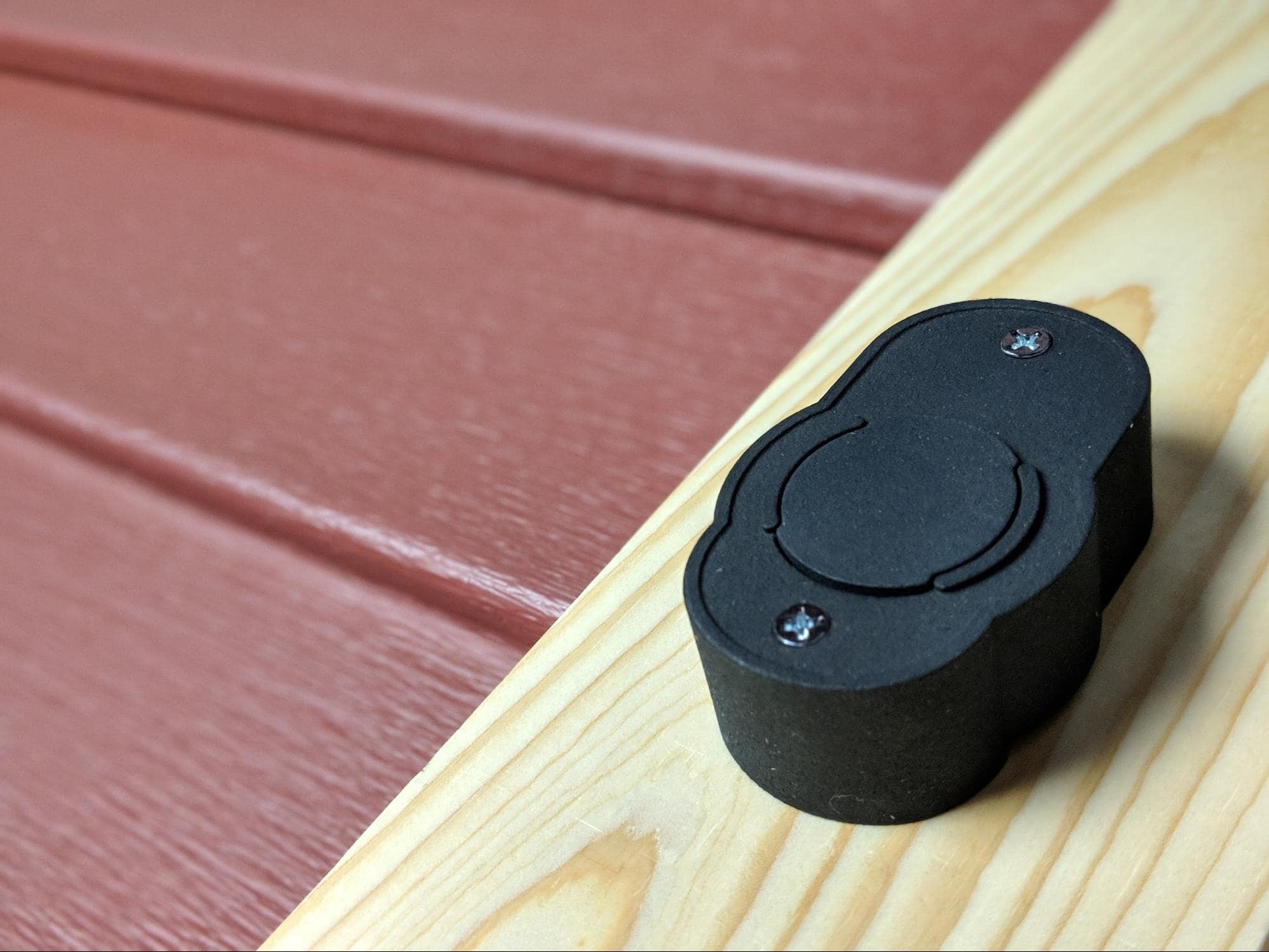 The Benefits of 3D Printing Your Prototypes

The biggest benefit of using 3D printing for prototyping is that both the technology and the equipment are highly accessible for individuals and product development teams.

For low-fidelity prototypes used to test the form and fit of parts, 3D printers with acceptable specs can easily be purchased for a couple of hundred dollars. Theyâ€™re also very easy to use, especially considering modern 3D printers of the past several years that require minimal setup, 3D printers are, more or less, a plug and play technology.

There are also a number of different 3D printing services designers can use to have 3D printed parts made. These are useful in case you lack access to a 3D printer, or if your design requires a high-end, industrial 3D printer. 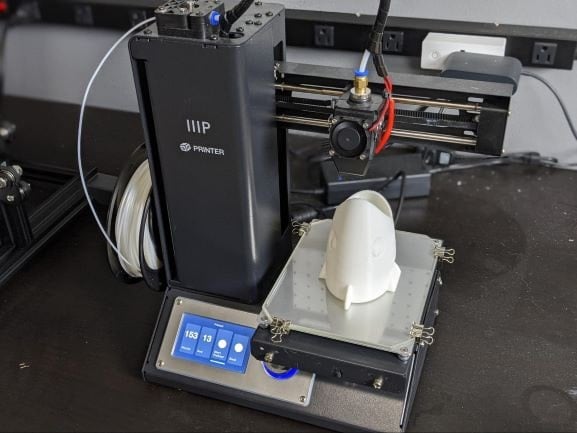 This is a Monoprice MP Select Mini V2 3D printer. For under $200, it is a great tool for prototyping small parts 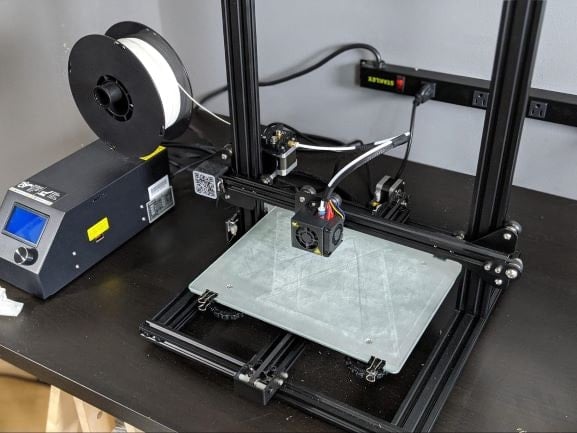 For larger prototypes, this Creality CR-10 MIni for under $350 is another highly accessible 3D printer

Aside from being so readily accessible, another major benefit to using 3D printing for prototyping is its vast flexibility. This is especially true when printing with a printer capable of using water-soluble support materials, 3D printing can be used to produce almost any geometry required for your prototype. A variety of prototypes can be created with 3D printing, including electronics enclosures, full product mockups, and individual parts that will later be manufactured using other production methods. 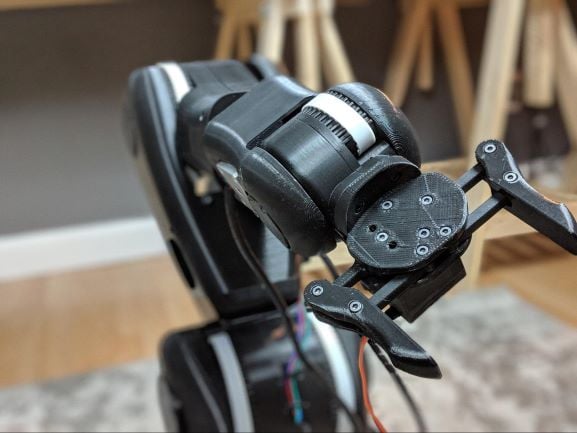 Another benefit of 3D printing is it is extremely fast compared to many other prototyping technologies. A large, complex, high-resolution 3D print might take tens of hours to complete. This per-part time is very slow compared to most manufacturing techniques, like injection molding, but it is very fast for prototyping. Many other types of prototypes need to be ordered from production companies, requiring several days to several weeks of lead time, with shipping time on top.

Ordering a CNC-machined part has a lead time of roughly a week, with five or six additional days of shipping time. Most 3D prints can be completed in a couple of hours or, at most, one day of printing time.

Downsides of 3D Printing for Prototyping

Even with all of the benefits discussed, there are three major downsides to using 3D printing for prototyping:

First, 3D printed prototypes do not share the same mechanical properties as manufactured parts. The first of several reasons for this is that 3D printed parts are not made from solid materials; instead, parts use an infill pattern, which is a lattice of printed plastic filling the interior volume of a part. While this can lead to surprisingly strong parts, their performance is not equivalent to parts made from solid material via injection molding or CNC machining. 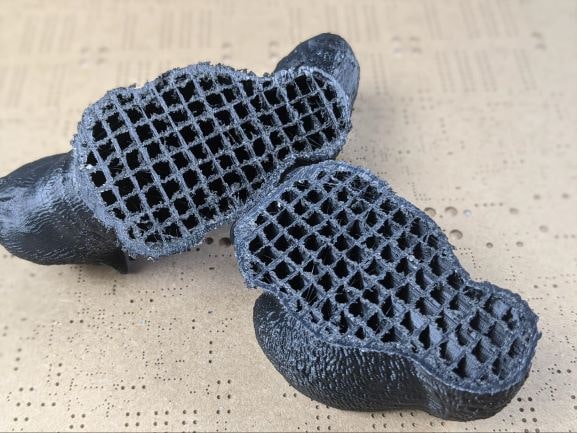 This is a 3D print cut in half to show the infill pattern.

The other aspect to this concern is the way 3D printed parts are actually made. Because parts are built up in layers, 3D printed parts can be prone to splitting between the layers. This, again, makes the performance of 3D parts different than parts made with other methods. 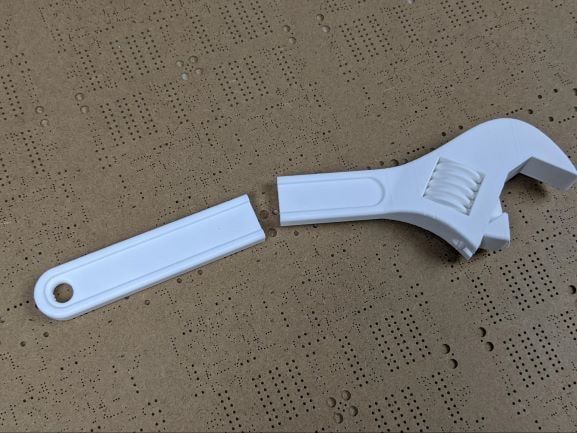 This 3D printed wrench broke along the layer lines in the middle of the handle. 3D prints lack strength when torque is applied parallel to the direction of the layers.

The second downside to prototyping with 3D printing is actually the same as one of the technology's benefits. While 3D printing offers incredible design flexibility, this flexibility exceeds the capabilities of most manufacturing methods. This means that it is possible to create a 3D printed prototype that is either prohibitively expensive or even impossible to manufacture.

For example, a popular evaluation object for 3D printers is 3DBenchy. This small boat tests various 3D printer capabilities. It is easily possible to print this part with good results on any mid- to high-end 3D printer. However, to produce the same design via injection molding would cost up to a quarter of a million dollars in tooling costs alone.

Designers need to keep the limitations of their ultimate production method when designing 3D printed prototypes. This 3D printed part would be extremely costly to make via injection molding 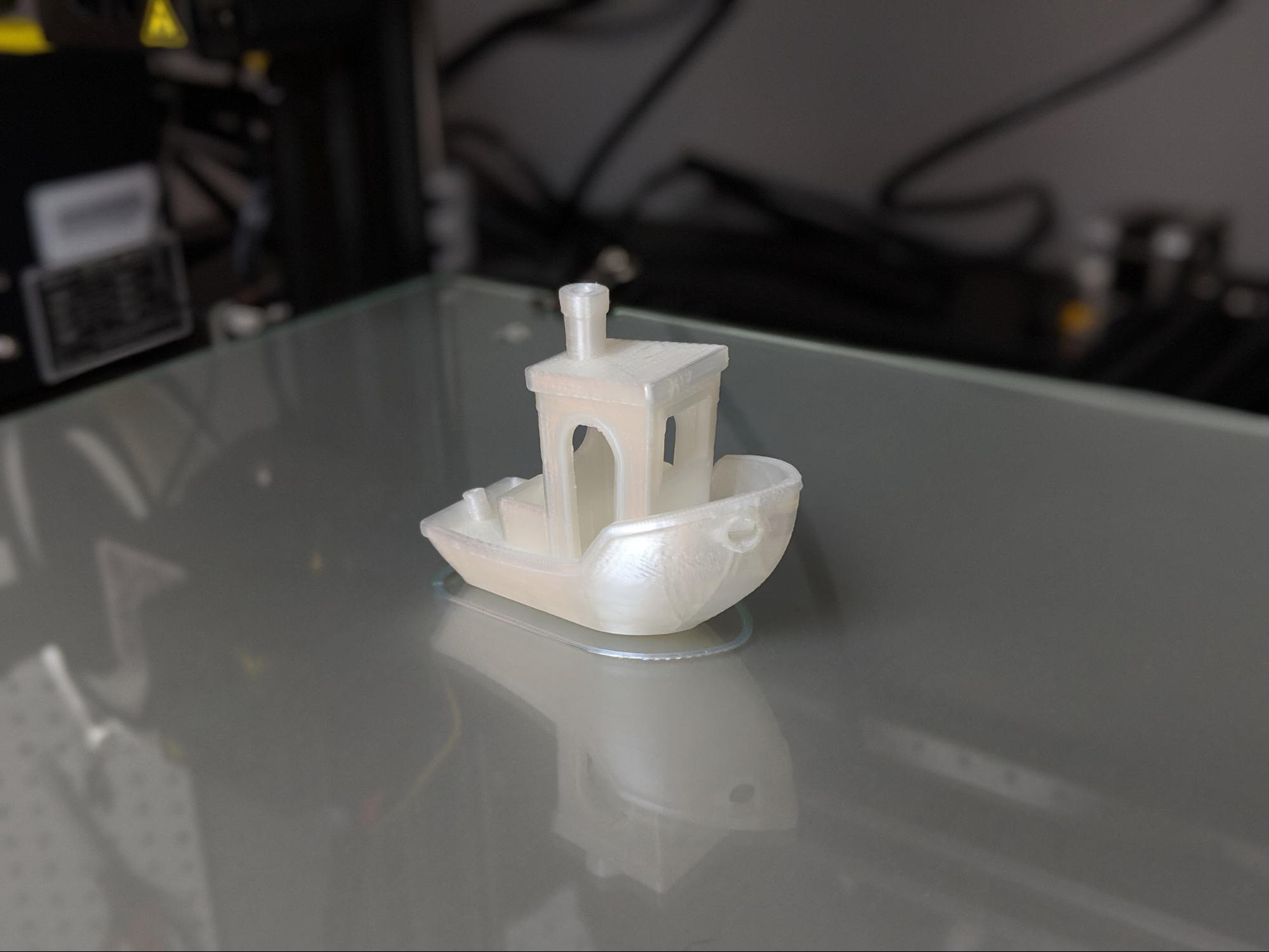 This is 3D Benchy. It is a test print for benchmarking the performance of 3D printers. This part can be printed with most consumer 3D printers, but it would be extremely difficult or even impossible to manufacture using other production methods

So, to get the best results from 3D printed prototypes, designers must keep in mind the design requirements for the manufacturing method that will eventually be used to produce the part.

The Limit of Aesthetics in 3D Printing

The final consideration for using 3D printing to produce product prototypes is aesthetics. Because 3D prints are built in layers, they layer lines are visible in finished parts.

Depending upon the purpose your prototype part serves, this may or may not be a concern. If you are simply testing the fit, overall design, or function of a part, layer lines in the prototype are likely unimportant. However, for final prototypes, having visible layer lines that detract from the aesthetics of the part and make it easily identifiable as a 3D print, can be an issue. 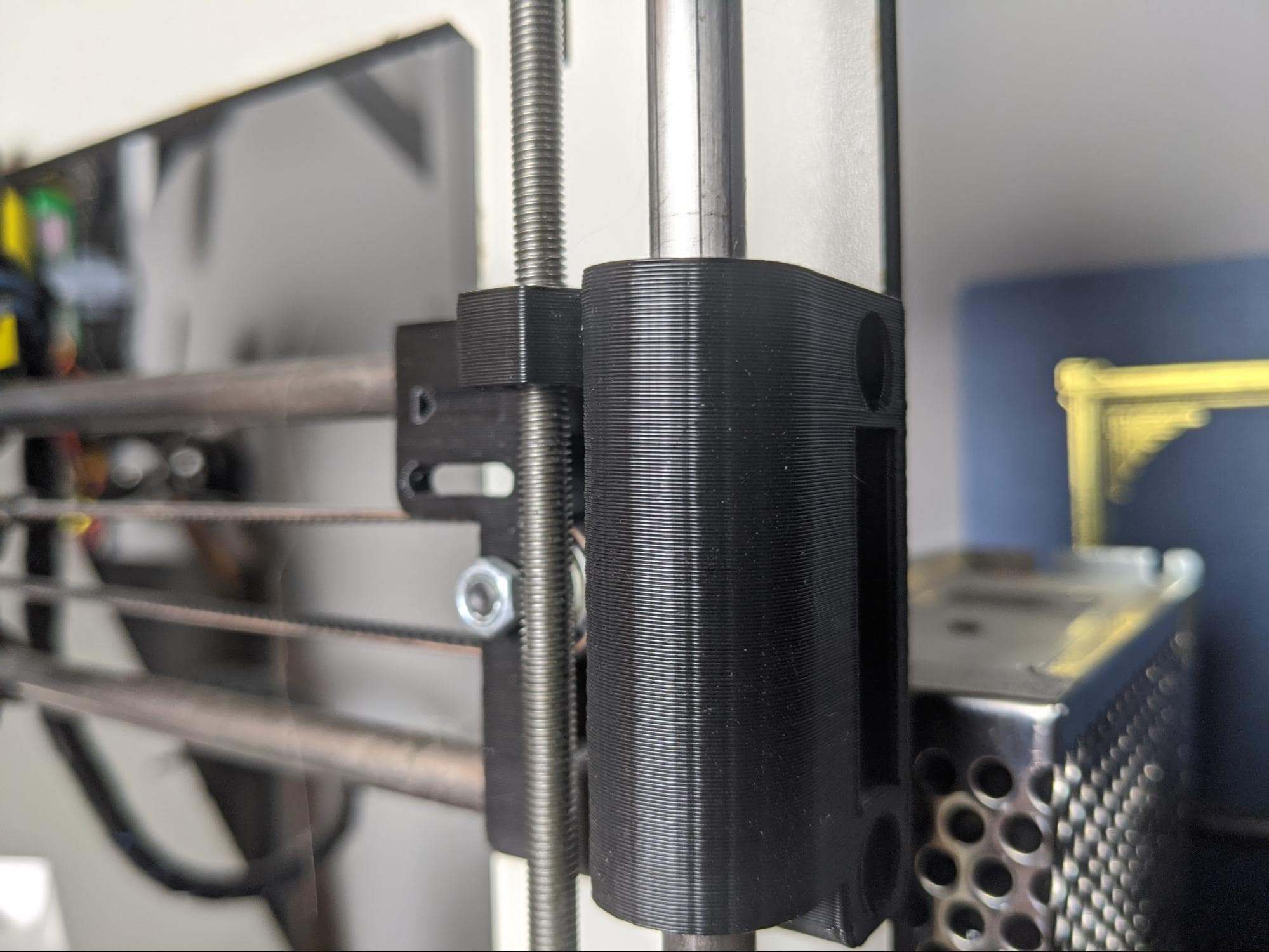 The layer lines in this 3D printed part are clearly visible

3D printing is one of the most accessible technologies for producing dimensionally-accurate and functional prototype parts. Desktop 3D printers are affordable compared to other computer-driven prototyping technologies like CNC machining or laser cutting. Also, if your product requires a high-end 3D printer to prototype, there are a number of 3D printing services that will produce prototypes using industrial 3D printing equipment. 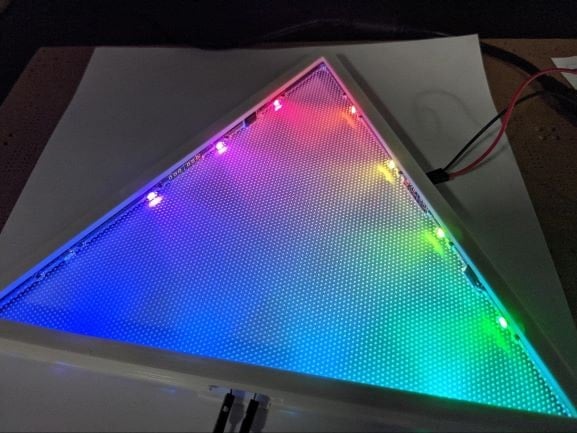 3D printing works well for creating prototypes designed to gain an understanding of form and function of a product. In some cases, 3D prints can also serve as functional prototypes.

However, 3D printed prototypes are not as strong as parts produced using other technologies. Plus, 3D printers only make parts from plastics. Some industrial 3D printers are capable of making prototypes from various types of metal, but these are orders of magnitude more expensive than desktop 3D printers.

For making prototypes from metal, wood, ceramics, or other materials that are either too expensive or impossible to use on 3D printers, CNC machining is another computer-driven prototyping tool that can serve as an alternative to 3D printing.