Ambient Light for computer (backlight for your PC) - PART 1

I wanted to share you with you the first part of my project. As we probably all have seen Phillips have came out with Ambilight to their TVs. Now in my opinion this is a great feature - however quite expensive.


Therefore it has been on the back of my mind to create something which would enable me to have this functionality. So I have came up with idea that I would just build one. This is still work in progress ( altough working nice already) and I hope you will like what I have prepared here.

For this project to work I had to find components. My choice in prototype is Atmega32 and a lot of intelligent and addresable RGB leds WS2812b. For simple communication with PC I decided for FT232RL ( I hope to replace it soon with RQ version)

Reason for Atmega32 was to account with possible extra room for my coding trial attempts.

Biggest challenge was appropiate timing for WS2812b - however I managed to achieve it with using functions close to assembler code.

So I have came with really simple design of Atmega connected to RS232RL and using one pin of mcu to control the output for LEDs. Then it took some time to prepare my TV back with all the LED stripes. Once I had that all completed again coding has started. This has been the biggest challenge (as it was C# ) as couple obstacles arised. First I had to be really quick with probing the screen so I have decided to use SlimDX library.

On top of that one to communicate with MCU I could not use my favorite method of AT commands. Reason was that processing command and termination character would cause delays.

So I have implemented start and stop characters and that has done its job.

For future purposes of use I created initiall WPF app that would allow me to to configure the controller. Results you can see on the movies/images below : 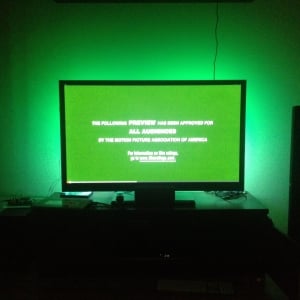 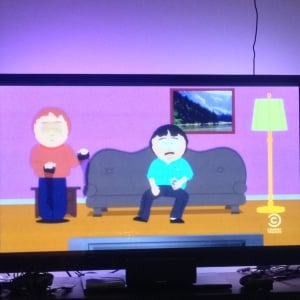 Unfortunately my camera isnt good enough to give you the idea how it looks LIVE and also I think I have too much LED next to each other (more than 160) .

For now the next step is to prepare small batch of PCB and order them somewhere for manufacturing with minimalistic size of QFN components.

And on top of that Im thinking of starting to write code to analyze traffic from media like TV/game consoles (so HDMI etc.) as at this moment solution works only with windows.