Modification to a CPU power supply to make it into a bench top unit.
Overview Gallery Discussion

This project came out of wanting to etch my first useful PCB (up to now all the PCBs I've made have been tests). I have a old CPU power supply that's been laying around for awhile, so I decided to convert it to a PSU I could use on my bench.

First I started googling around for info on it, and found that it uses a standard computer PSU pin-out called ATX 2.x. The wikipedia article on it is here: https://en.wikipedia.org/wiki/ATX#Power_supply.

So the first order of business - draw a schematic. Here it is: I decided to use a PIC18F1220 for this project because I have quite a few laying around. A 1602 LCD will be used for the user interface – I'll need some way of telling the user which voltages are switched on. Three switches will work for user control (Select/up/down – or something like that).

Yes, I know that the fuses overlap other parts - The plan is to have the fuses mounted on the back side of the circuit board and the rest of the parts on top. The relays are just some high current ones that I salvaged from a used circuit board (I think they where out of a broken fryer to be exact). 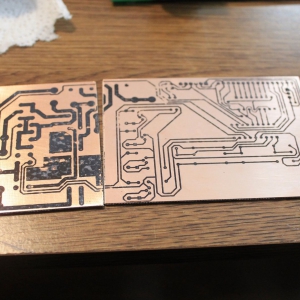 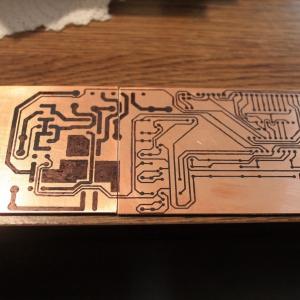 The first photo is right after the toner transfer - As you can see, there are quite a few spots were the toner did not stick ideally. The next photo is after touching up with a sharpie.

I think I may have rushed the toner transferring part a little, and that's why it didn't turn out so good - I could have redone it, but I didn't want to use up any more of my all to little supply of glossy paper.

So after etching I realized that sharpie is probably not the best resist – it appeared that some had come off during the process... Here's a photo of the PCB after patching the broken traces with solder (sorry I forgot to take a photo right after etching. ): 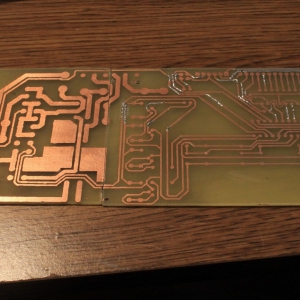 I guess the next step will be drilling the holes on the PCB – But unfortunately my drill bits haven't arrived yet, so I guess I will have to call it for now.

Well the drill bit's came in - here's a photo after drilling: 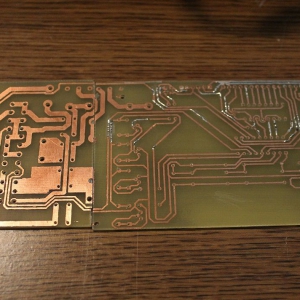 I had some trouble with the drill bit's breaking but with some help, I got it worked out here: https://www.electronicspoint.com/threads/drill-bits-for-homemade-pcbs.275652/page-3 - Thanks to all who contributed!

I also decided to try and put a silkscreen on the board: 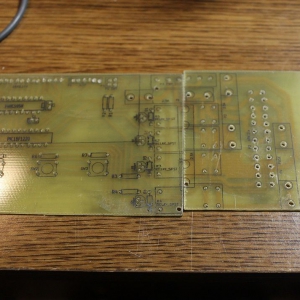 I used the same method as I did for the copper side. But as you can see, on the right side of the left board the transfer moved and blurred out. It doesn't really matter much though, because this was more of a test to see if I could do it and the relays will cover it up. 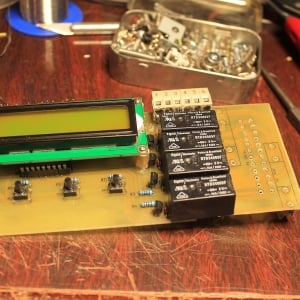 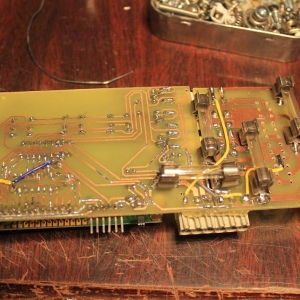 Everything soldered up pretty nicely. I used stranded wires for the LCD connections so it could be lifted backwards if I need to get at the parts under it. I decided to mount a switch instead of a jumper on P4 which should make it a little less painful to program it.

Everything was going good until I realized that somewhere along the line the connector for the power supply got mirrored on the PCB! I guess I will just have to hand wire it.

So I opened up the power supply case to cut out some wires that I don't need for this project, and looky what I found: 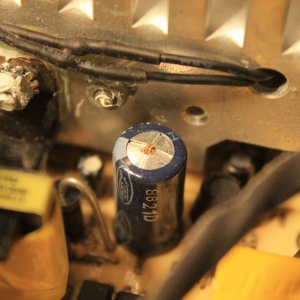 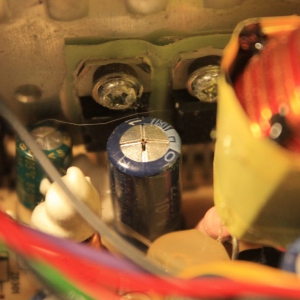 I guess this power supply has had a lot of on hours - as I remember though, the computer I pulled it from still worked so I think I will just over look that for now...

Next I made a chassis out of the metal from an old popcorn can (it's tin so it solders nicely), and attached the circuit board to the power supply. Here's a photo: 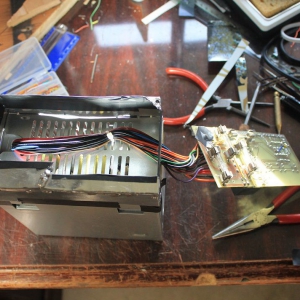 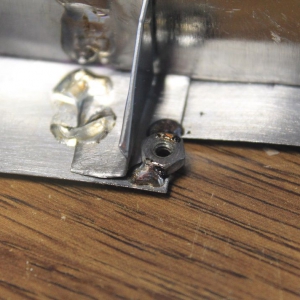 Photo two is a nut I soldered to the chassis so I could attach the circuit board to it with screws (aka make it easy to take apart and troubleshoot when it doesn't work ). I had to get out the weller 140W soldering gun to make the joints as my regular soldering iron just couldn't cut the mustard. The display looks kind of weak but it may just be a bad LCD.

Next step will be to write some code.

I guess the next step isn't going to be writing code - instead it will be trouble shooting the PSU!

So after playing around with a little code, things just didn't seam to be working right. I decided to check the standby voltage, and to my great surprise it read about 2.8VDC (not 5V as expected)! So I hooked it up to the scope (being careful to hook ground up in the right spot ) and here's what I got: 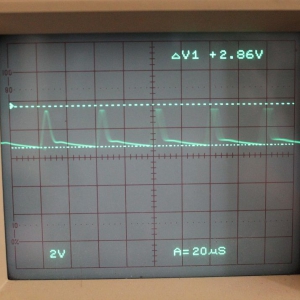 Look liked the fault of a seriously bad capacitor to me! So I wrote down the values of all the caps that looked suspicious and bought some new ones from digikey (of much higher quality).

After putting the new caps in, I turned it on and the problem seamed to still be there... After some more experimenting I found out that all the screws that hold the circuit board in place have to be in for the unit to work (they connect to the metal chassis completing the ground plane). It now works great - all the voltages are nice and flat (the LCD works a lot better too).

Well, I finished up the code. Here's the main part of it:

Code:
(This isn't the whole code, as there are a bunch of different files - they can be found on Github though)

Here's a photo of the power supply's main screen: 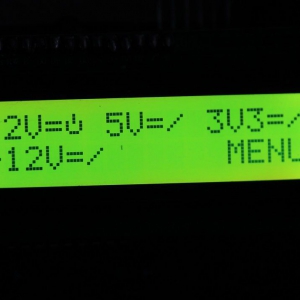 And the finished power supply above my desk: 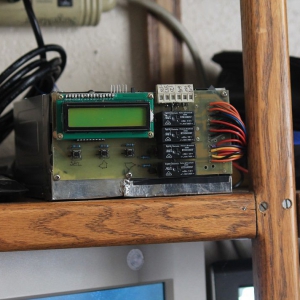 I'm pretty happy about how it turned out. It doesn't look very good from the front though - I'll probably make a cover for it some time in the future.

I 3D printed a front cover for the power supply, and with a little paint it looks pretty good: P.S. All the design files for the project are on GitHub: https://github.com/Supercap2F/CPU-Power-Supply-Mod
Reactions: FuZZ1L0G1C, jitendra Bhatt, DCNoob and 6 others