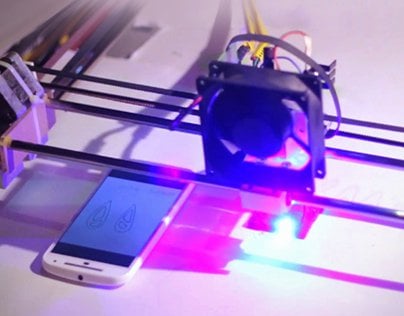 Use an Arduino to make your own budget-friendly, augmented reality-based laser cutter. 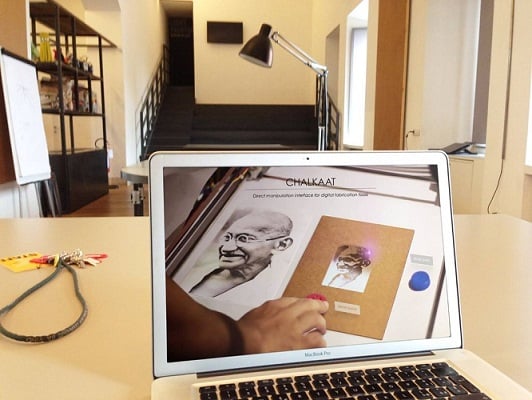 CNC/Laser cutters are invariable tools of modern day fabrication and there are a lot of open source DIY laser cutter projects that you can make. They are now being widely used in industrial applications at a more personal and mass consumer level. But the cutters today have an indirect interface involving external computers. I can explain this better with an example. Imagine you want to cut a leather bracelet for your arm. To do this with present laser cutters, you will have to first take the measurement of your wrist, make a CAD drawing, and only can you cut a shape. There are two problems here:

What if you could simplify this by placing your hand directly on the work piece and telling the system directly about measurements, using hand strokes? It removes the process of tedious measurement taking and CAD modeling. The system projects the tool path telling the user about the actual size to be cut and the actual position where cutting will happen.

Chal-Kaat ("let's cut" in Hindi) is an attempt to do exactly this. It's a direct manipulation DIY laser cutter that's aware of the strokes being drawn on the workpiece. Chalkaat is a pen stroke based UI for interacting with laser cutters. The users can express themselves by working directly on the workpiece. The camera on top tracks the strokes on paper. Different colored markers allow different commands to be executed. We built a laser cutter from ground up, with computer vision and mechanics to optimize the interface.

The total cost of this project is $390. You can reduce the cost of your DIY laser cutter further by salvaging components like motors, drivers, belts, bearings, and fans from old electronic gadgets.

How Does the Laser Cutter Work? 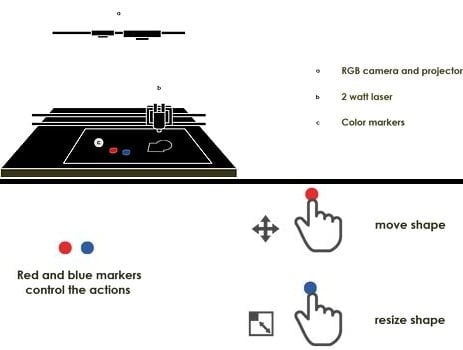 As explained above, the ChalKaat project allows you to interact with your cutter and design your results on the work piece. This is how the system works:

This is achieved using a projector and an RGB camera. The RGB camera has two functions:

The projector, on the other hand, projects the scanned image on the material surface used for cutting.

Assembling the X-Axis of Your DIY Laser Cutter 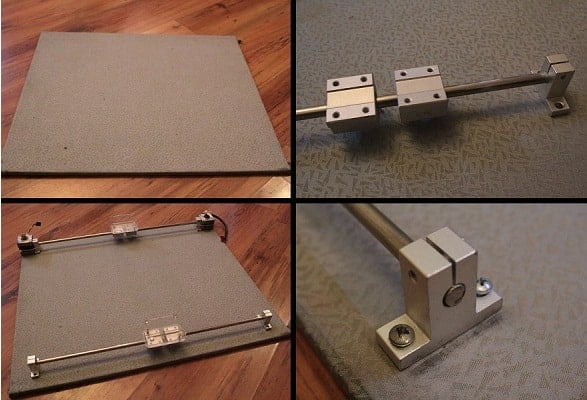 Assembling the Y-Axis of Your DIY Laser Cutter 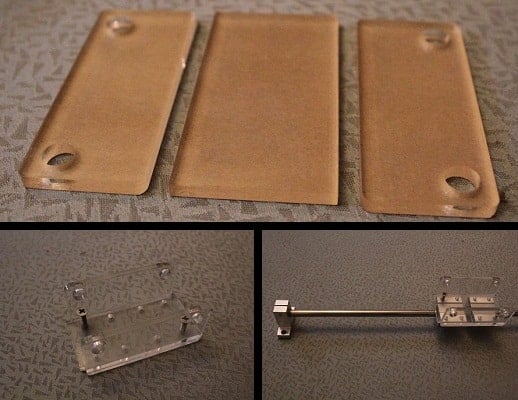 To mount the y-axis rods, we have to prepare a mount for them. Since we cannot use sk8 here, I got acrylic mounts laser cut from my friend. It had 3 pieces(like in the figure)Â andÂ I assembled them by gluing the three pieces together.

After assembling the y-axis of the DIY Laser Cutter

Also, insert one sc8uu bearing into each y-axis rod (this will be used to mount laser in the next step).

Mounting the Laser and Laser Driver 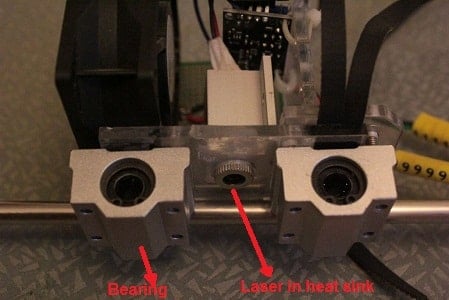 The driver accepts input voltage from 5 to 24V and the laser accepts 6V, which is perfect. Don't exceed the input voltage beyond 7-8 volts. The laser driver needs some calibration for setting up the laser diode current. For our laser, the maximum allowed current was 1.8 amps at 5 volts. The instructions for doing this is in the manual. You can use a multimeter to calibrate the driver. The driver accepts a modulating signal of 0 to 5 V to control the intensity of the laser. This means, at 0 the PWM laser will be barely ON and at 255, the laser will draw its maximum current. 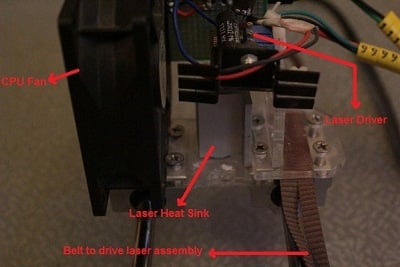 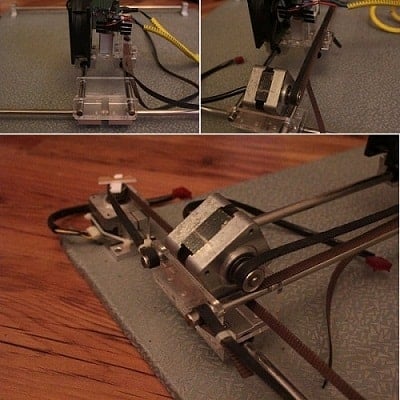 Hardware Schematics and Final Board 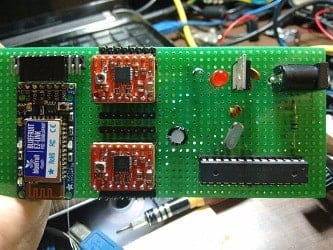 Given the option of buying an Arduino or building one, we didn't want to spend $35 on a microcontroller board. So we built one using this Arduino.cc tutorial. You will need an FTDI chip to program and send serial data if you build your own board. Arduino boards already have a USB to serial converter.

We had a Bluefruit EZ-Link which can wirelessly program the Arduino using bluetooth. It is also used to wirelessly transfer g-code to the microcontroller. You need to properly connect it to atmega328p controller as shown in the schematics.

There are two modes in which this DIY laser cutter works:

There are firmware programs like GRBL which are already there to interpret g-code for your DIY laser cutter. But, we decided to write our own basic firmware (for the sake of learning). What it does is simple, it accepts current (x ,y) co-ordinates along with the laser intensity level and just draws a straight line between previous (x ,y) and current (x ,y) points. In this way, we approximate curves using straight lines.

I mentioned before that we used red and blue color markers for moving and scaling projections on the workbench of the DIY laser cutter. To make this work, you have to install opencv. Opencv is an opensource computer vision library available for multiple platforms. To track color, we first convert images from RGB scale to HSV scale. In HSV scale, each color is assigned a particular value (Hue). The "amount" of color is assigned another value (Saturation) and the brightness of the color is assigned another number (the Intensity or Value). This gives us the advantage of having a single number (hue) for a single color.

I use Linux, so I used xdotool to resize and move windows. But you can also use opencv's inbuilt functions to do the same. 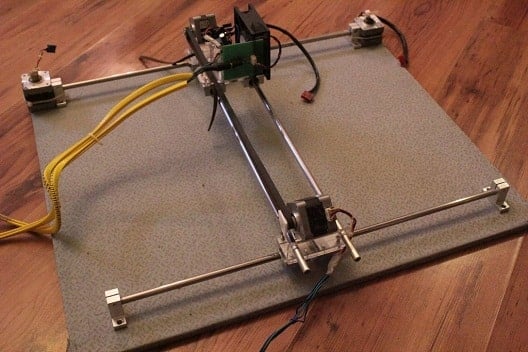 Follow these steps and you'll be able to build your very own ChalKaat DIY Laser Cutter on a slim budget!

Demo at National Museum of Science and Technology, Italy

The Chalkaat DIY laser cutter was demonstrated at the National Museum of Science and Technology Leonardo da Vinci, Milan, Italy.