How to Measure a Servo's Torque Using an Arduino

How to Measure a Servo's Torque Using an Arduino 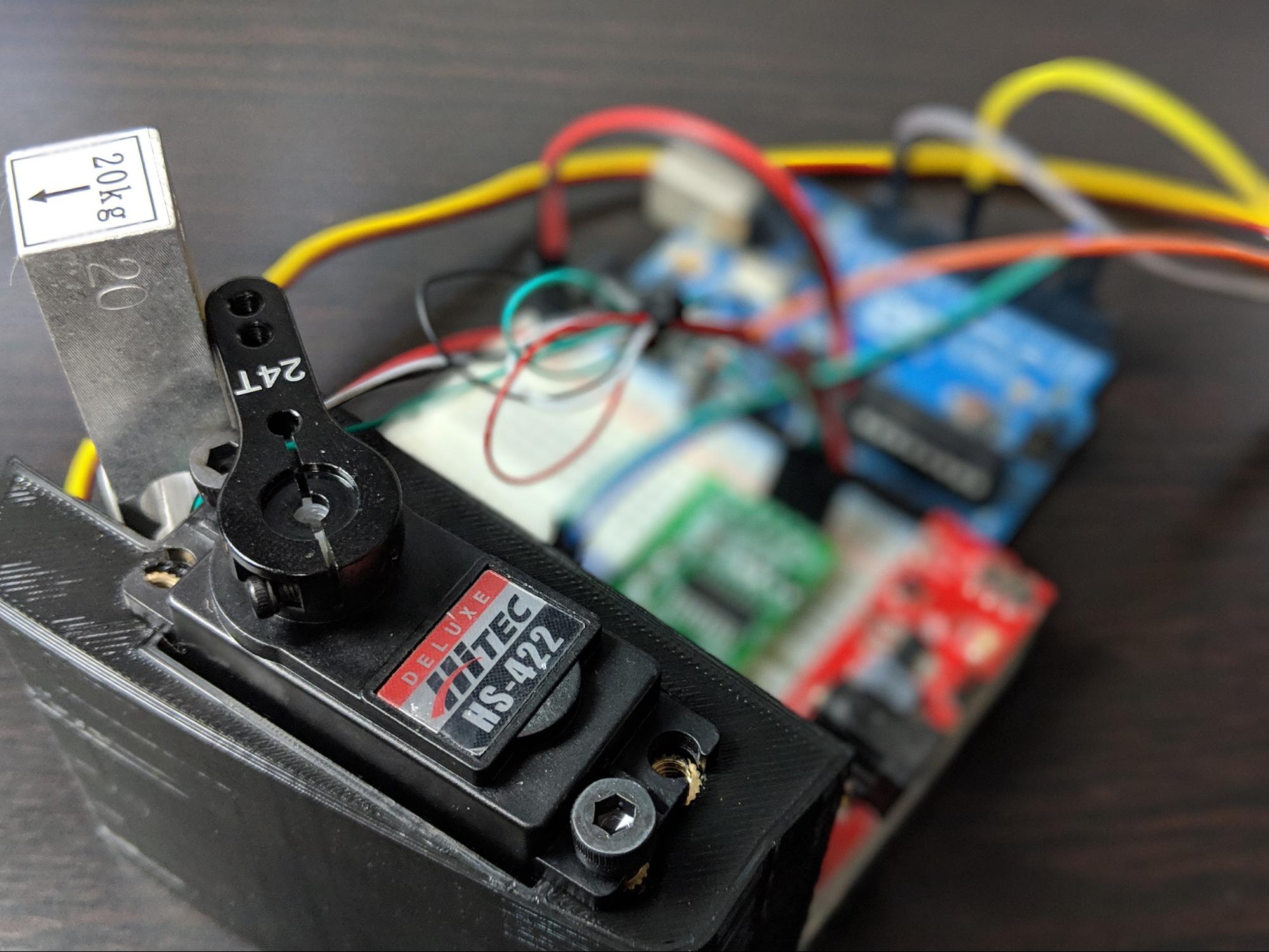 Learn how to measure torque force for build projects with Arduino.

In daily life, we're often presented with a range of statistics from product manufacturers that, at best, have a loose relationship with the experiences of actual users.

Smartphone manufacturers claim their batteries last far longer than they actually do.  Tech companies advertise all their products as the most compact versions and car companies boast false fuel economy numbers.

Servo motor manufacturers are no different. They make various claims related to the amount of torque force their motors are capable of producing.

Specifications from the Hitec website for the HS-422 servo.

In this project, we'll be building a tool for measuring the torque range produced by standard-size servos.

In this way, it's easy to verify if a particular servo will produce the necessary torque force for a build.

Using a load cell, an Arduino Uno, a 3D printed frame, and a few other parts, it's simply to load a servo into place and accurately measure the torque force it delivers. 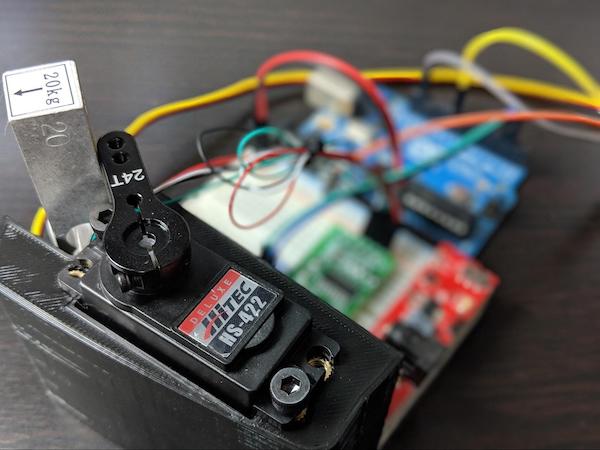 The required load cell, Arduino Uno, 3D printed frame and other components required for this project. 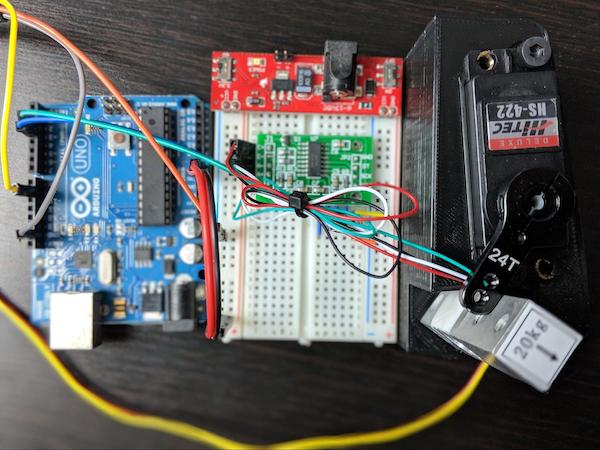 Overhead camera shot of the components required for this project. 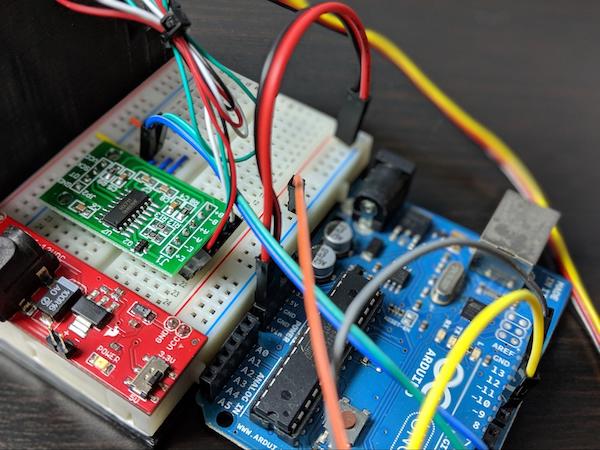 Close up camera shot of required components for this project.

In addition to the above materials, you'll need a hobby-size servo for testing purposes.

How to Measure the Torque Force of a Motor Servo

Torque is computed by multiplying a force over distance. In this project, it will be slightly tricky to obtain the force exerted by the servo. To do so, a load cell will need to be used.

There are intricate details involved with the design and use of load cells, but for the purposes of this project, a load cell is a sensor that allows a computer to translate small voltage changes to a force.

Using a load cell we'll be able to measure the exact distance between the axis of rotation for the servo and the arm on the servo horn.

Keep in mind that the servo will push against the load cell when it attempts to rotate. 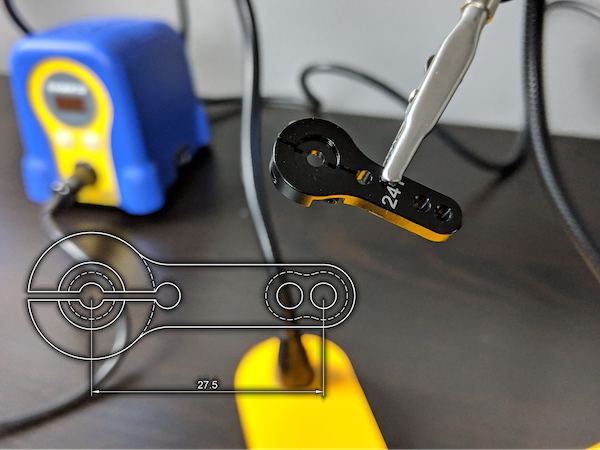 Considering the force measurement from the load cell, as well as the rotation and servo arm distance, we'll be able to calculate the torque force delivered by it.

The mechanical design of the testing tool is simple and consists of two 3D printed parts and a couple fasteners.

You can find the design files for the 3D printed parts attached to this article.

There aren't any special printing parameters needed, so any rigid plastic for the parts will do.

In fact, since aesthetics aren't a priority for this project, you can use a high layer height to speed up the printing time.

Note: A Monoprice MP Select Mini with a layer height of 0.3mm to print the parts. 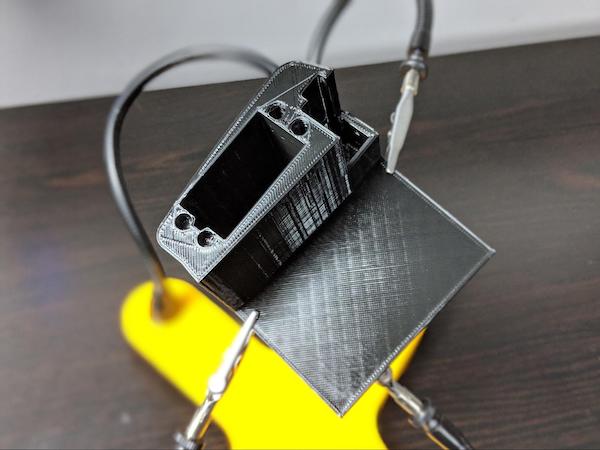 The project printed parts assembled together.

The first step in assembling the servo torque measuring tool is to install the heat-set inserts that allow the servos to be securely installed, and later uninstalled, without damaging the 3D printed frame.

To install the heat-set inserts, place each insert over one of the servo mounting holes.

Gently press the insert into the plastic using a soldering iron set to 250Â°F.

Don't push the insert too hard. Let the heat do the work for you and allow the insert to sink into the plastic.

When you remove the soldering iron, the molten plastic will solidify around the insert creating a very strong bond. 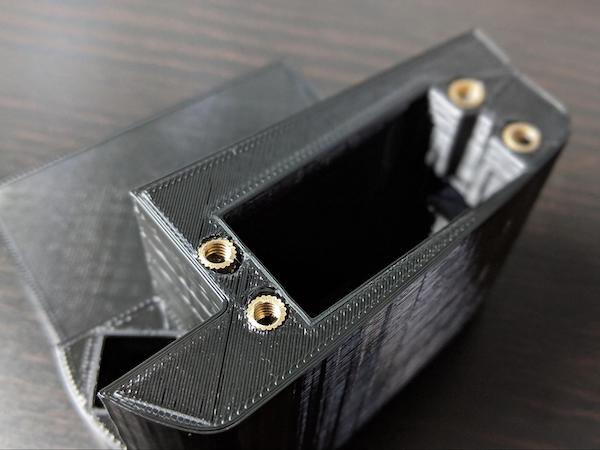 Next, install the load cell, which on one side will have a green arrow. Turn it up on that side with the arrow facing away from the servo, then insert the load cell into the square next to it.

The load cell should fit tightly into place, ensuring there isn't any flex in the mounting that would cause errors in the force measurements.

Finally, the large, flat area is used for the breadboard.

Once the mechanical design is complete, we can begin to work on the circuit.

There's a switch on the power supply that controls the output voltage.

For this project, we'll be using 5v. There's also an on/off switch on the power supply.

For now, turn the power off. 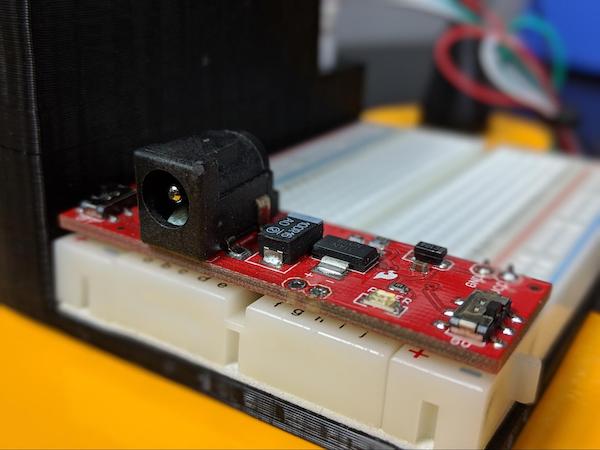 Power supply attached to the breadboard.

Now, a preparatory step should be taken before adding the HX711 to the breadboard.

There are four connections for the HX711 on the side closest to the servo. Use a small piece of wire to run across the breadboard about five spaces.

When we put the HX711 on top of the wires, we should still be able to plug other jumpers into the breadboard next to the HX711 and access it's pins.

To make this step a little clearer, check out the image below.

Once the wires are in place, plug the HX711 board in next to the power supply. Make sure the pins line up with the four wires. 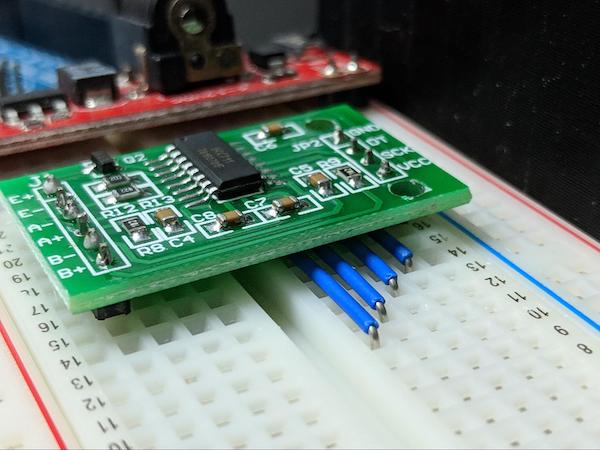 The HX711 board plugged into the breadboard. 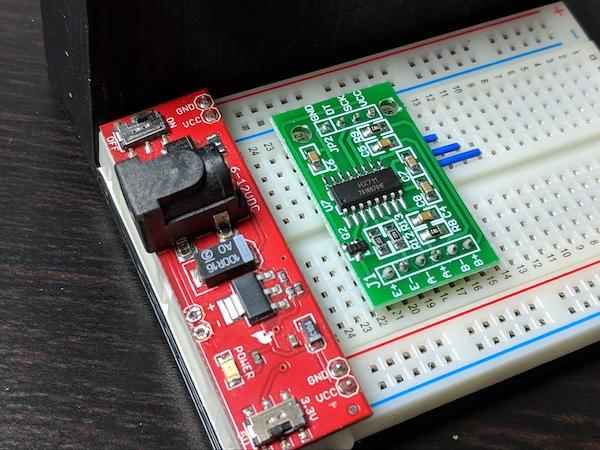 The HX711 board shown next to the power source.

Finally, the Arduino Uno will sit alongside the torque measurement tool. 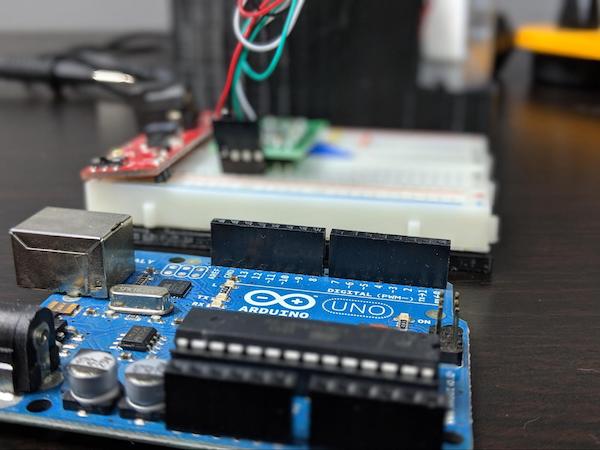 The torque measurement tool created in this project and the Arduino next to each other. 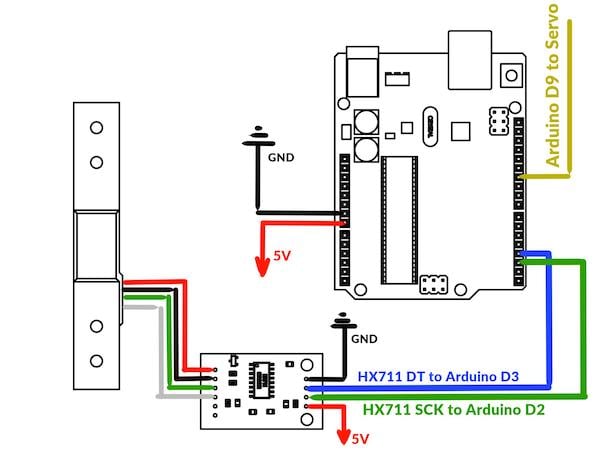 Diagram of circuitry for the project. 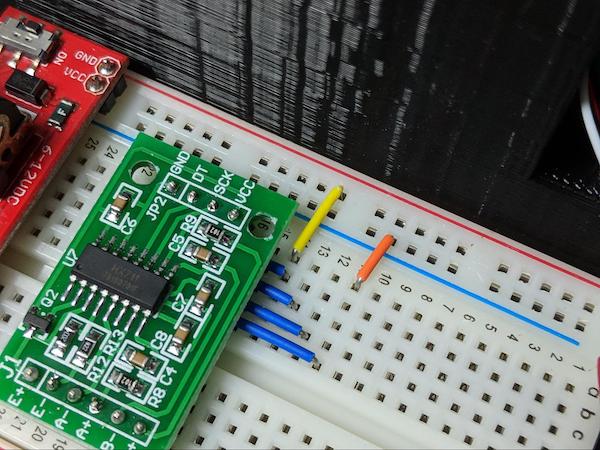 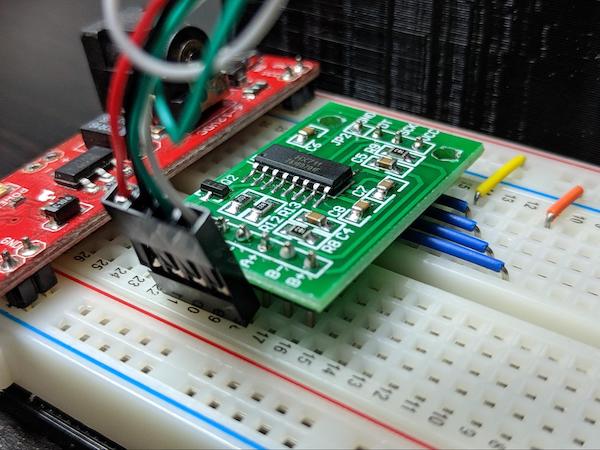 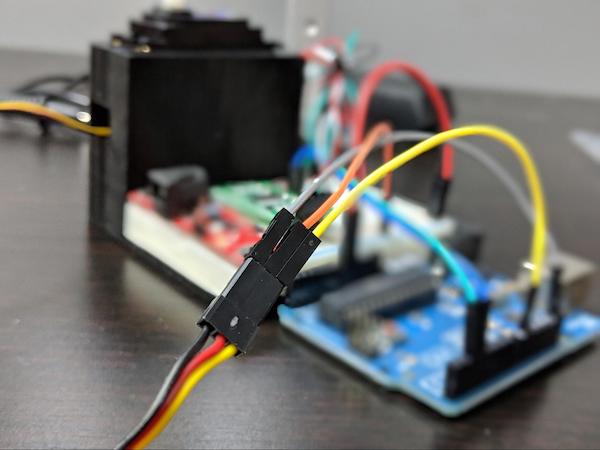 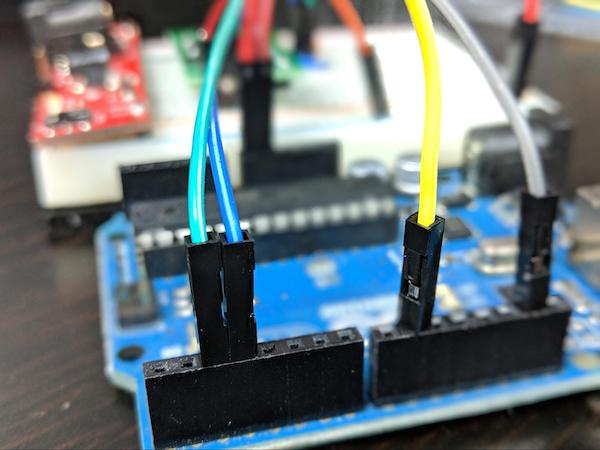 When both the mechanical and the electrical assembly are complete, the final step is to upload firmware into the Arduino.

The testing procedure used by the Arduino is relatively simple.

The Arduino will drive the servo arm into the load cell. The resulting force on the load cell will produce a reading that the Arduino receives from the HX711.

After all the hard work assembling the servo torque tool and programming the Arduino, we can now finally measure the torque force produced by the servos. But first, we need to install the test servo into the measurement tool.

To install the servo, simply slide it into the housing.

The servo should be oriented for the motor shaft to be closest to the load cell.

The servo's wire will come out through a hole behind the load cell. It can be plugged into the Arduino from there.

To secure the servo into place, use at least two M4 x 6mm screws.

The system can be powered entirely from your computer's USB port.

If you only use the USB power, the servo will run off 5V. Since servos are typically powered by a range of voltages, you can also use the power bar on the breadboard.

This will allow you to provide the servo with a higher voltage than the 5V over USB connection.

Once you have the system powered, open up a serial monitor. You will be prompted to send 's' over serial when you are ready to begin the test. 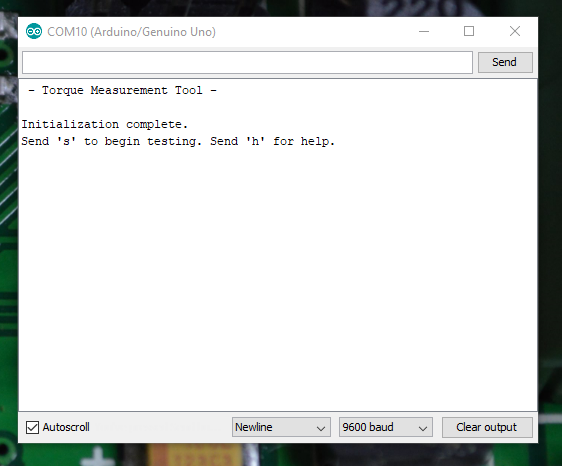 The Arduino should start to move the servo arm away from the load cell at this point, once it does run it back into the load cell.

Since the the servo is trying to move to a position inside the load cell, it will exert a force on it.

The Arduino will measure this force, convert it into torque, and send the results to the serial monitor. 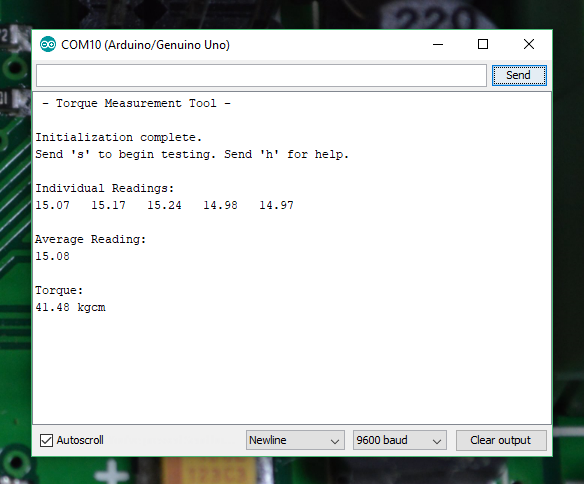