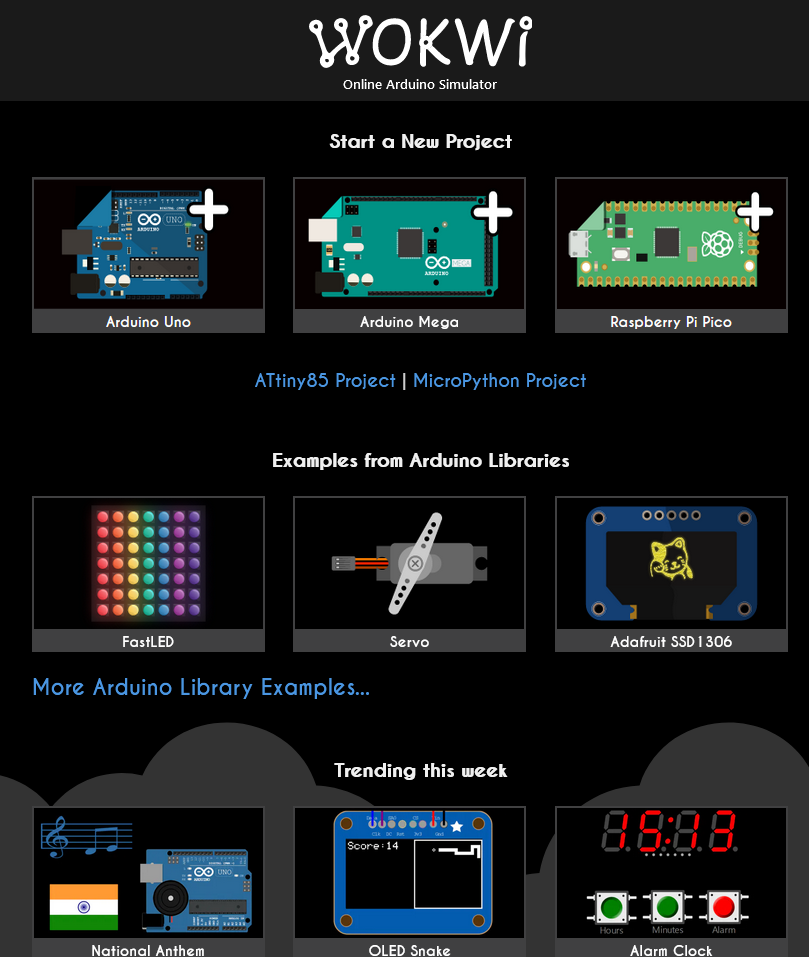 Load the HEX file and start executing your project!

You can effectively run existing Arduino sketches as well on the Wokwi Arduino simulator. To do this, you can go to the command palette (shortcut key F1 )

Here is the screenshot: 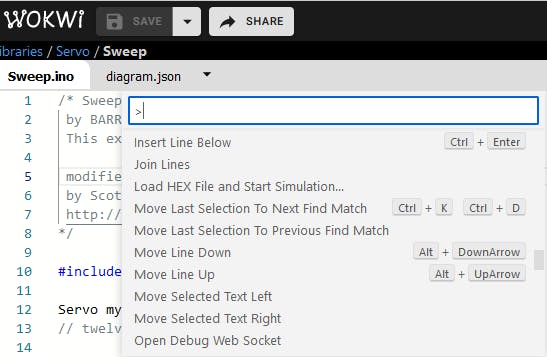 You can find the option in the drop-down menu. You can also notice a lot of other state of the art options. This makes the Wokwi Arduino simulator, the one with a modern useful and efficient Arduino editor among the available online Arduino simulators.

You can download the compiled hex file as well. The below screenshot has that option as the second element in the list. 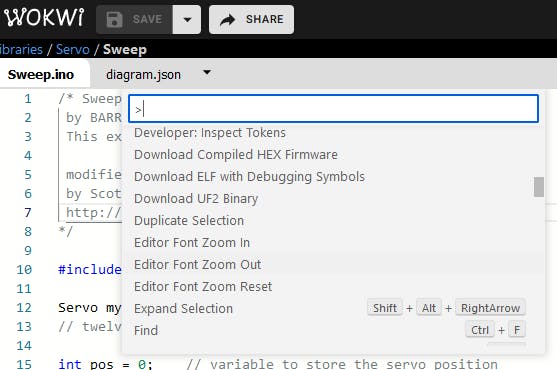 You can view the code in assembly language as well

Having a look at the assembly code as well is a dream come true for certain debug use cases. You can see where your code is getting stuck or losing the normal control flow.

Wokwi Arduino simulator emabled you to view the code in assembly as well!

FastLED platform to unleash your creativity

You can use the Wokwi Arduino Simulator to engage with your creative skills. Here is one example of a FastLED matrix. This example simulates a working fighter software. Think about the efforts and time needed to set up the same with the real hardware, before you can start testing your code!!!

Amount of effort needed to create a matrix like this. In case if you need to change the matrix size by 10 LEDs, the effort will be double the original. it will take more than a month to get one simple FastLED matrix to design, fabricate, assemble and test. It takes about 10 minutes to create a similar project on the Arduino simulator. You can focus on implementation and testing rather than rigging up and other logistics. The link to the below project is here.

It doesn't mean that you should never go to hardware. Arduino simulators help you to get your plan on paper. You can easily verify how it is going to look, test your code up to an extent and then confidently go ahead with the hardware implementation. Here is the article on the story of an idea getting its wings in the Arduino simulator, later, produced and it works instantly!

On the other hand, sharing projects were never simple. You are able to read about the fighter FastLED project or even the Splendida project because of the Arduino simulator. It is easy to share hardware among others but the simulation projects can be shared in just a click! Hence, You will always find the Wokwi Arduino simulator, a favourite tool for FastLED projects especially.

Talking about the sharing feature of the projects, the Wokwi Arduino simulator has made it really easy. It is just a click, literally. Your friend can open the project, and just run it out of the box. Here is a snapshot from the Arduino simulator where you can simply click on the share button to copy the link. You can share the link which can be opened by anybody worldwide and start executing the project on the go.

Sharing the project is easy on Wokwi Arduino Simulator

I would like to give a link here where earlier features are compared here.

To include a library, go to the code editor and type # on an empty line. You'll see a autocomplete dropdown with #include suggestions for popular libraries.

By default, Wokwi compiles your code with the standard built-in Arduino libraries, such as Wire.h and SPI.h.

For example, the following file will install the latest versions of Servo and FastLED, as well as version 2.3.0 of MySensors:

Thank you for your time.