Getting Started With the Arduino Web Editor

Getting Started With the Arduino Web Editor 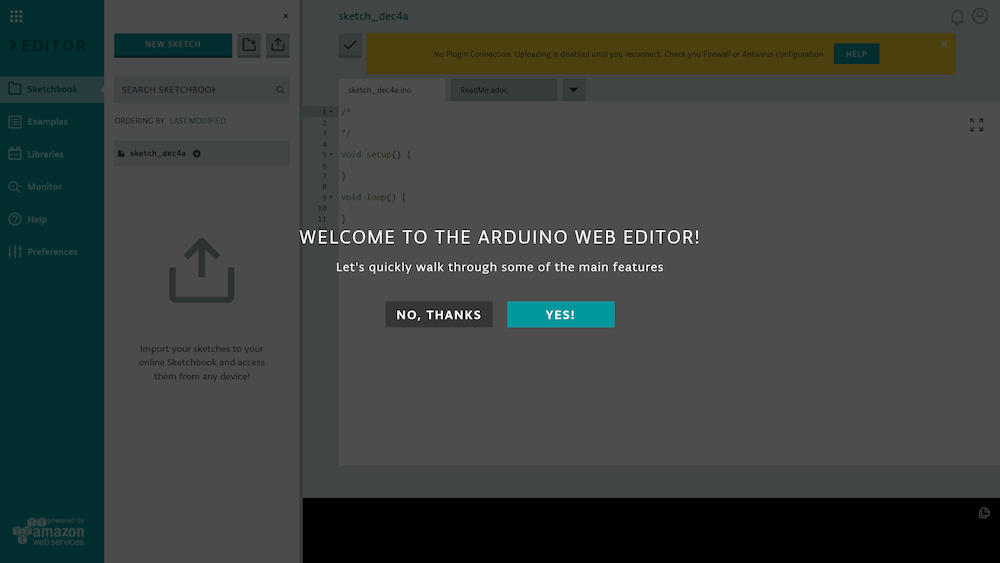 Learn how to set up the cloud-based Arduino Web Editor and explore the pros and cons between it and Arduino IDE desktop.

As one of the most popular prototyping platforms, Arduino has made hardware projects much more accessible. With the Arduino Web Editor, you can work on your projects while away from home as long as you have an internet connection.

To start, go to the Arduino Create website, the home of the Arduino Web Editor and other online tools.

If you have never used the online editor before, you will need to install the Arduino Create plugin to connect your boards. Once you click on the Arduino Web Editor box, you will be asked to log in to your Arduino account.

To create a new account, simply click â€œCreate an Accountâ€ to make one for free in less than 5 minutes. Once you confirm your email, you will be welcomed with a quick tutorial. 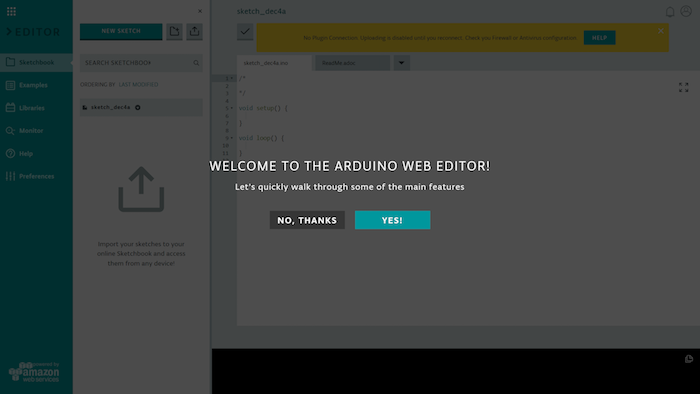 After you create an account, you will see the welcome window where you can go through a quick tutorial. All screenshots are taken from Arduino Web Editor.

The tutorial briefly explains the siteâ€™s main features, such as the online Sketchbook, your account, and uploading code to your microcontroller. At the end of this tutorial, you will be able to import your existing sketchbook. If you choose not to import any files right away, you can always upload them later.

The online Sketchbook works like the desktop version, except it stores sketches in the cloud. It allows you to code from any compatible internet-connected device.

To upload a new file, simply click the import button beside â€œNEW SKETCHâ€. In the â€œExamplesâ€ tab, you will be able to select and run your librariesâ€™ example sketches (if any) as well as the built-in Arduino examples.

To upload your own libraries, you will need to access the â€œLibrariesâ€ tab and click on â€œLIBRARY MANAGERâ€. There, you will be able to upload any libraries stored on your device in .zip format. The serial monitor can be accessed by going to the â€œMonitorâ€ tab under libraries.

If you need help with the editor, sketches, libraries, or have compatibility issues, the â€œHelpâ€ tab provides many useful resources with links to references and guides. The â€œPreferencesâ€ tab helps you customize your online programming experience and displays the amount of space you have left for storage. 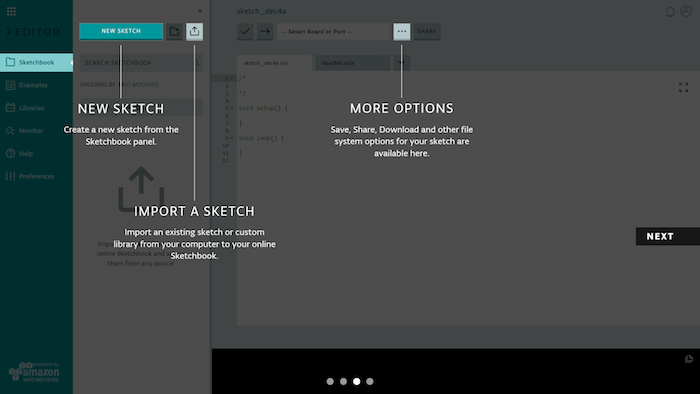 After setting up your account, you will be taken through a quick tutorial to show you the basics of Web Editor.

There are pros and cons to both Arduino design options.

The Arduino Web Editor was made to benefit from the advantages of the cloud. Once you upload a sketch or library, you can access it from anywhere. The Arduino servers already have 700 of the most popular libraries, so they do not need to be redownloaded.

Though the desktop IDE has a setting for you to save your sketch every time it is compiled, the web editor also has a periodic autosave feature. Once saved, the updated version of your files will be accessible instantly from your other devices.

Another feature notably missing from the desktop IDE is the ability to easily share your files. The online IDE allows your sketch to be embedded in a website and gives you a link that you can use to share your sketches with the world.

While programming in the Web Editor has many advantages, it does have its drawbacks. The largest are its storage limit, reliability, and minimal options compared to the desktop IDE. The storage limit of 100MB could be an issue for users attempting to move all of their work online. As another hit to reliability, sometimes the servers are overloaded and block more users from logging on. Lastly, the online IDE simply does not have as many features as the desktop version. For example, the desktop version allows users to use different Board Managers and programmers. With the web editor, users are limited to official Arduino/Genuino boards and a few other compatible boards.

Bottom Line: Find the One That Works Best for Your Projects

The Arduino Web Editor and the desktop Arduino IDE are both great solutions to different problems. If you need to finish a sketch from different workspaces, the former will prevent the hassle of manually updating your code with a flash drive. For users with a set workstation, however, the latter comes equipped with more settings and options that give the user more control.