Programming Arduino Using Loops and the Map Function in BlocklyDuino

Programming Arduino Using Loops and the Map Function in BlocklyDuino

In this tutorial, we are going to learn about FOR loop, WHILE loop, and the Map function of BlocklyDuino.

To further explore the FOR loop, WHILE loop, and Map function we will also utilize a potentiometer, a pulse width modulation signal, and a servo motor. We will do three exercises based on these topics.

A Quick Recap of Part 1

The previous article, How to Program an Arduino Using BlocklyDuino, began with instruction on installation and initial setup of the program. If you havenâ€™t used BlocklyDuino before, I highly recommend you begin with that tutorial.

Fading and Brightening an LED using the FOR loop 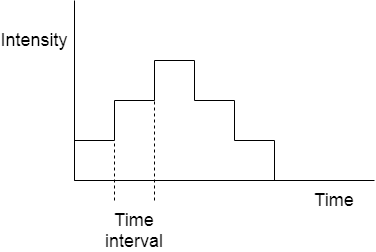 So now the question is how are we going to change the intensity of LED? By using the AnalogWrite block!

The AnalogWrite block is located in the Input/Output tab of BlocklyDuino. It outputs different voltage levels per the specified PWM value entered by the user.

A visual of the difference between analog and digital signals

PWM is a combination of analog and digital, meaning that its nature of wave is similar to a digital signal but it can have an infinite number of voltage levels similar to an analog signal. The voltage generated by the PWM wave is called the average voltage. Letâ€™s look at how the PWM wave exhibits this property. Start by taking a look at the graph below. 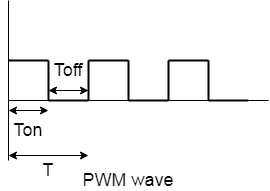 T is the total time taken to complete a single wave and Ton and Toff are the ON time and OFF time of the pulse, respectively. The ratio of Ton to total time is called the duty cycle.

By changing the duty cycle and keeping the same frequency, we can generate different voltage levels.

The image below shows PWM waves with different duty cycles and average voltage.

With an understanding of the AnalogWrite block and PWM, next up is the FOR loop block.

The FOR loop block asks for two arguments viz start, and endpoints of count variable. It starts incrementing/decrementing counter variables from the set start point and goes up to the endpoint. So, code presented inside this loop wil; execute again and again until this variable is in the range of the start and endpoint. This block can be found in the Control tab of BlocklyDuino. 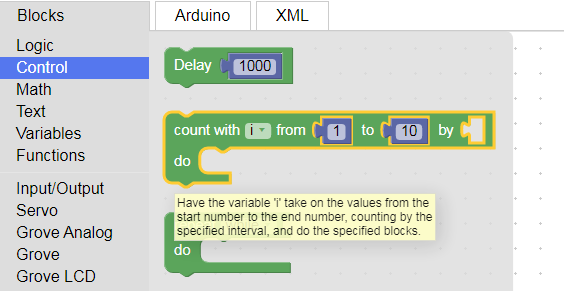 To give a better understanding, I have designed a flowchart of the FOR loop below. 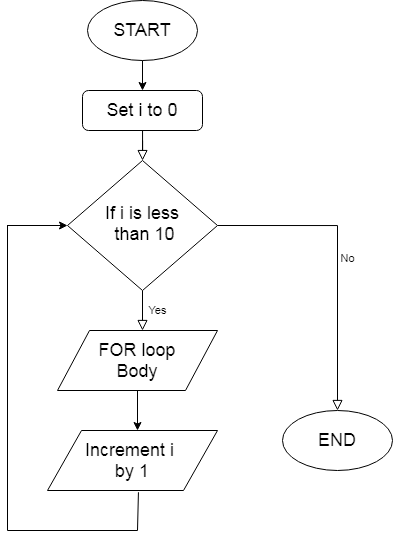 Flowchart of the FOR loop

To achieve our task of LED fading and unfading, we are going to use both the AnalogWrite and FOR loop blocks.

Hardware connection and code are given below for your reference. 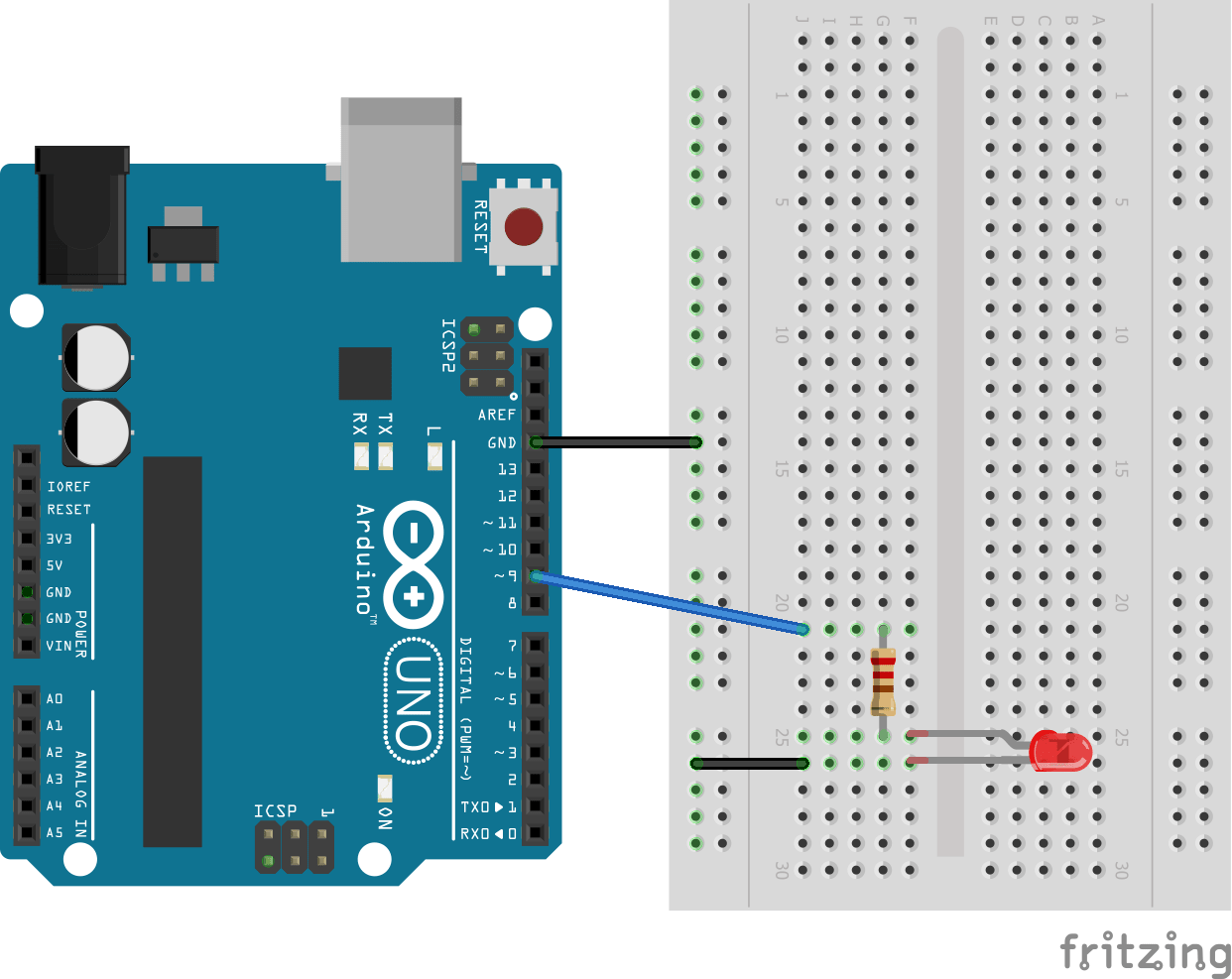 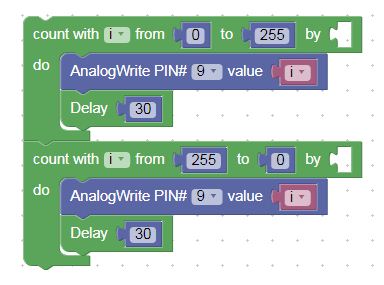 Compile the code and download it onto your Arduino board. Once the programming is done, observe the fading and brightening of the LED. Try to change the delay in the FOR loops and write in the comment section below what difference you observed!

The voltage obtained at the second resistor end is calculated by the following formula:

We are going to read this voltage at the Arduinoâ€™s analog input pin and control LED. First, let's make the hardware connections. 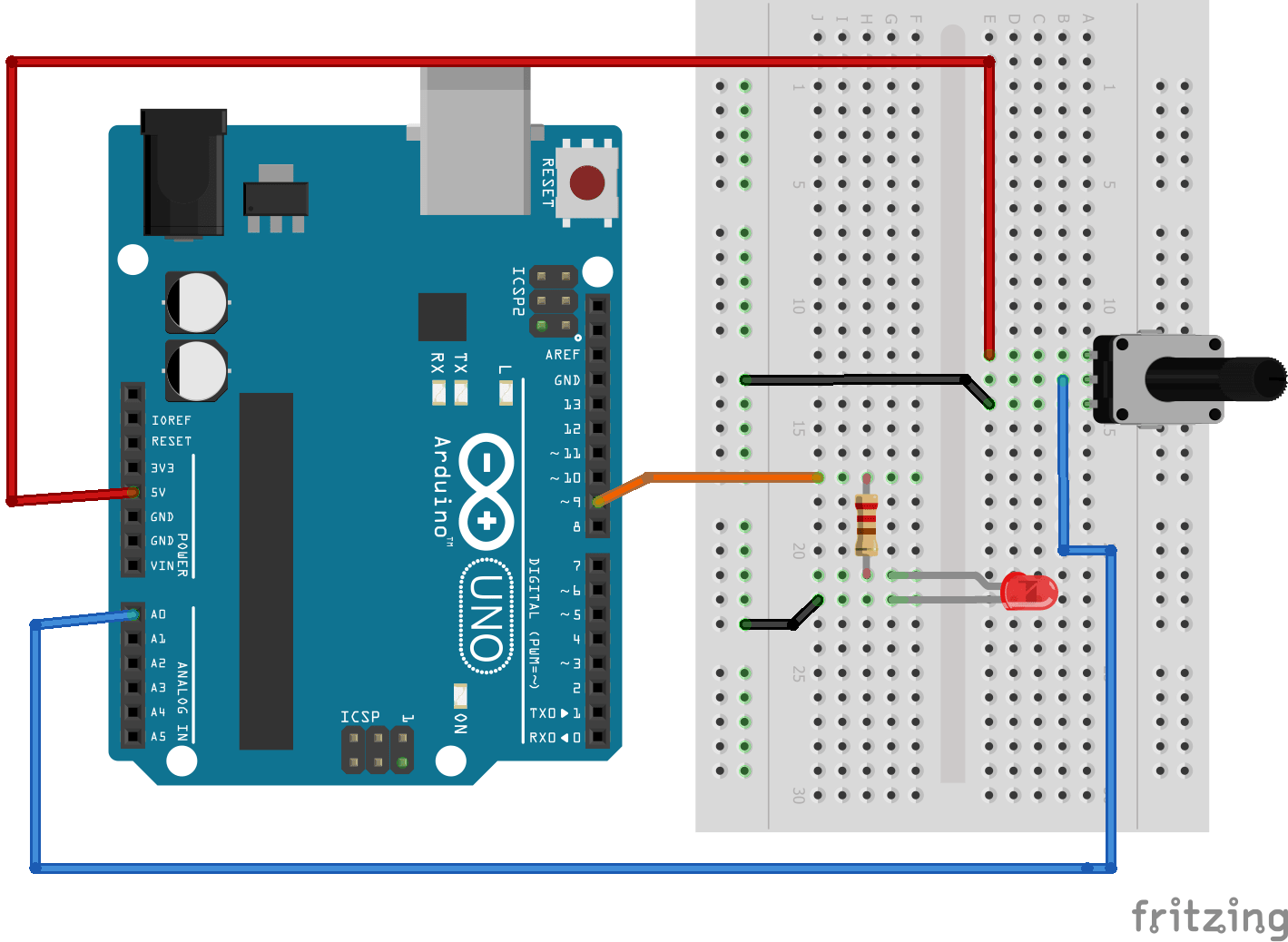 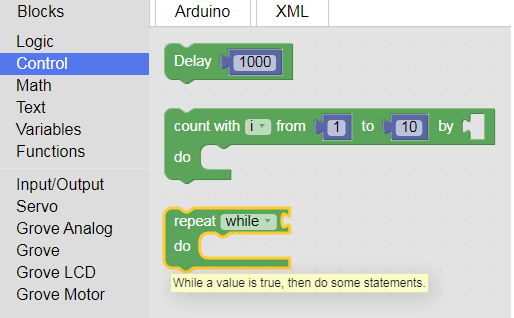 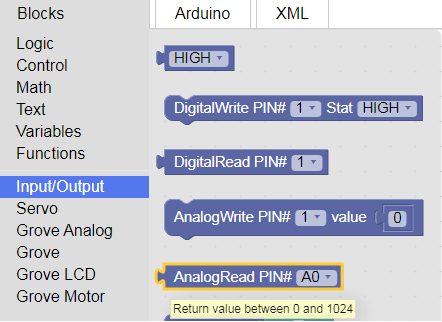 We have to specify the correct analog pin number in the AnalogRead function. In the WHILE loop, we have to pass a condition block, which can be found in the Logic tab.

In the conditional block, the program has to pass two arguments for comparison and select the mode of comparison. The code written inside the WHILE loop will be executed again and again until the set condition is satisfied. 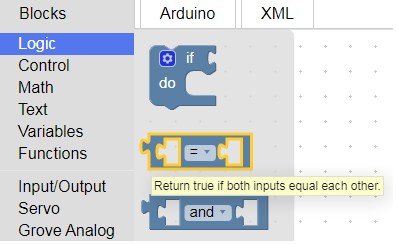 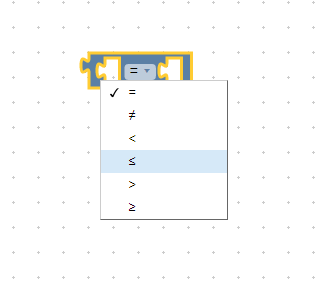 The flowchart below shows a visual understanding of what we want to achieve. 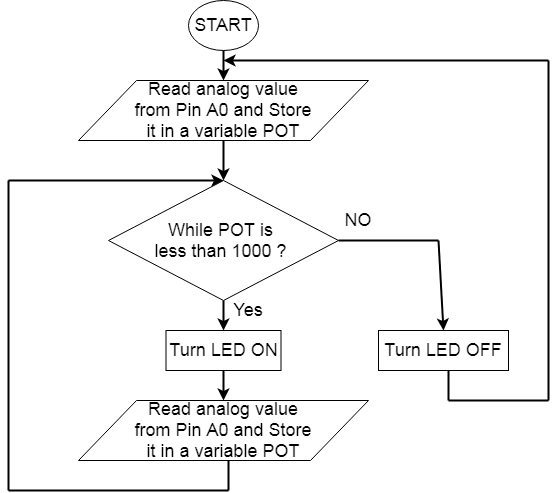 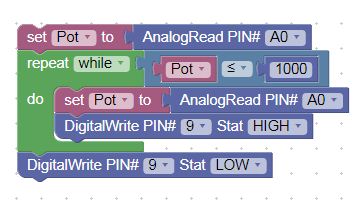 Compile the code and download it onto your Arduino board. Once programming is done, observe LED turning ON/OFF by moving the potentiometer.

Reading the Potentiometer Value and Controlling a Servo Motor

In the previous section, we discussed potentiometers and how to read their value using the AnalogRead block. In this exercise, we are going to use this potentiometer value (0-1023) to set the position of a servo motor.

A servo motor has three pins: Vcc, Gnd, and PWM input. Connect all three pins to Arduino as shown in the diagram below. 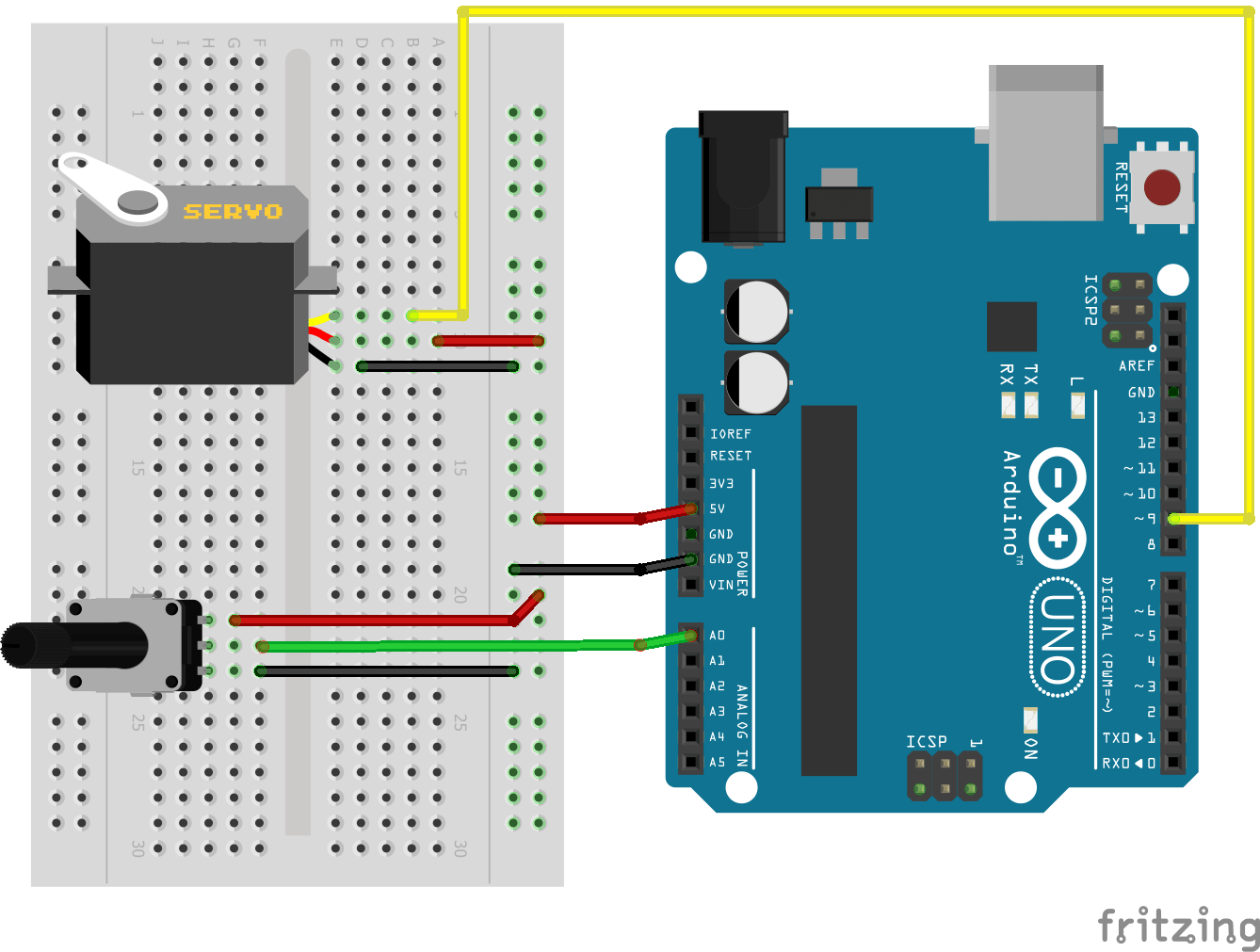 Servo motors can be controlled using PWM pulses from an Arduino. The AnalogWrite functionâ€™s block range is 0-255, so we have to convert the potentiometerâ€™s reading to the output PWM value range. For this, we use the Map function, which is an inbuilt function of Arduino. The Map block can be found in the Math tab. 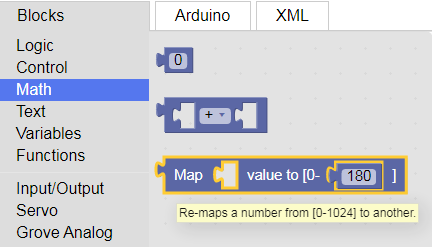 We need to specify the expected output range (0-255). Here is the screenshot of the code:

Compile the code and download it onto your Arduino board. Once programming is done, observe the servo motorâ€™s position change.

A Recap of What We Learned

In this tutorial, we discussed pulse width modulation signals and how to output a PWM signal from Arduino using the AnalogWrite block. By using the FOR loop, we changed the PWM value at every instant and controlled the intensity of the LED.

In the final exercise, we used both the AnalogRead and AnalogWrite blocks to read POT value and control a servo motor. We also learned about the Arduinoâ€™s built-in Map function and its uses.

I hope you enjoyed learning more about programming your Arduino using BlocklyDuino. If you have any difficulty while using Blockly, feel free to post in the comment section!

I am an embedded software engineer. I write blogs about electronics and software development.