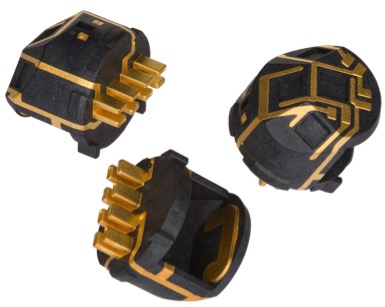 Harting Mitronics is at the forefront of 3D-MID (three-dimensional moulded interconnected devices) manufacturing in Europe. But what makes this technology unique, and how does it improve engineering design?

3D-MID is a technique of layering injection-moulded substrates with metallic conductor traces which function as electrical pathways. It simplifies overall design complexity by integrating mechanical, electrical, optical, and thermal functions on one substrate. This allows design engineers to produce smaller and lighter weight parts with more functionality than conventional alternatives.

A 3D-MID part consists of a thermoplastic mould with embedded electronics. Injection-moulded substrates can be commercially-sourced polymers impregnated with special additives. After the moulded part has been metallised, various surface mounted devices can be embedded on the conductive paths located on the surface via small gaps, channels, or apertures. The placement process is fully automatable, with robots being used to ensure accuracy.

MID technology was first introduced in the 1980s as a three-dimensional alternative to standard PCBs with additional design capabilities.

Due to its rapid popularity, several OEMs and makers were quick to partner with early developers to leverage what was touted as the future of PCBs. However, the hurried implementation was met with largely disappointing results which experts attributed to the initially high cost of production and insufficient knowledge concerning its design and control.

Today, MIDs are making a comeback due to the rapid growth of the IoT and an increasing demand for devices with higher antenna ranges.

Harting Mitronics, also known as Harting 3D-MID, is a subsidiary of the Harting Technology Group based in Espelkamp, Germany. The company is the largest manufacturer of 3D moulded packages and components in Europe, serving a large client base spanning the automotive, medical, industrial, and sensor manufacturing industries.

LDS is the process of doping a thermoplastic substrate with metallic inorganic elements using a laser beam. The substrate used is usually a single-component injection-moulded part which contains an LDS additive.

The laser beam defines the tracks where the conductive tracings will be located and also activates the additive. A high-purity copper bath is then applied to fill the activated paths, adhering firmly to the thermoplastic material. Selective metallisation is carried out sequentially and in layers, using various elements like soldering tin, lead, gold, nickel, and silver. LDS is ideal for low-volume production.

This process was first carried out by scholars at the University of Applied Science in Germany and further developed by LPKF Laser & Electronics AG, the latter of which obtained its exclusive patent rights in 2002.

Two-shot injection moulding, also known as 2K moulding, is a manufacturing technique for creating 3D moulded parts from two different resinsâ€”one substrate is metallised while the other is non-metallised.

To ensure the durability of the multi-layered product, the resins are chosen based on their ability to adhere firmly to one another when coupled. An organic compound (additive) is applied to activate the conductive paths which are then metallised using electroless plating: a two-shot technique that's ideal for high-volume production. 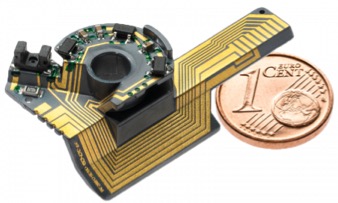 Harting primarily manufactures 3D-MID parts for the automotive industry, however, they can be utilised in a broad range of electronic components.

Owing to their lightweight and component-dense configurations, 3D-MIDs are components of choice in LTE antenna modules of consumer electronics like cellphones and notebook computers, or in wearables such as fitness trackers and smartwatches.  In those cases, the antenna pattern is defined on a plastic mould using the LDS technique.

MIDs simplify design complexity by allowing several functions to be implemented on the same material. For example, an electronic circuit can be embedded on a movable mechanical part, saving costs associated with manufacturing specialised parts.

Selective metallisation of 3D moulds allows for more components to be integrated on the same substrate as space is used efficiently. Engineers can add new functionality to new or existing systems by simple pick and place assembly done manually or by using robots.

3D-MIDs allow engineers to design component-dense circuits that meet space constraints in small-footprint applications such as medical implant devices, portable sensors, and optical switches. The lack of physical connectors and minimal soldering reduces the weight and size of the final products.

Placing components on a 3D substrate is a time-efficient process which can be fully automated using mCAD/PCB CAD software, considerably reducing the assembly times and TTM for new products. 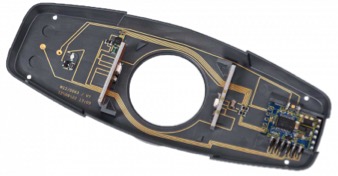 Are MIDs the Future of PCB Technology?

Well over three decades into its development, and in an era of increasingly miniaturised devices, 3D-MID technology offers a host of possibilities for component integration with the highest degree of design flexibility, and Harting is currently leading its development in Europe.

According to market reports, the industry is set to expand 15 per cent between 2017 and 2023. Itâ€™s also implemented alongside additive manufacturing techniques such as laminated object manufacturing, material extrusion, and VAT photopolymerisation.