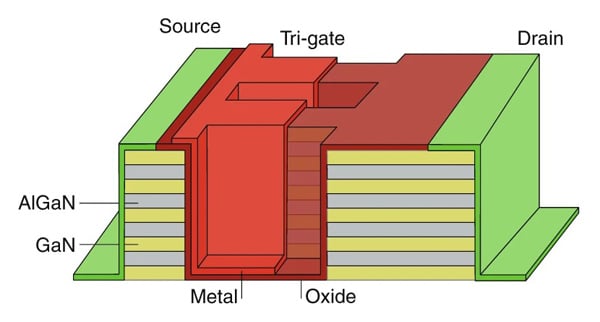 As published in Nature Electronics, researchers have taken on an alternative approach to boost GaN power devices and bring them closer to reaching their theoretical performance limit.

At the 2019 IEEE International Electron Devices Meeting in San Francisco, Jun Na, Elison Matioli, and other colleagues demonstrated a four-channel aluminum gallium nitride (AlGaN/GaN) transistor that can achieve a breakdown voltage of 1.2 kV together with a low on-resistance of 2.8 Î© mm. This is a major improvement of over 50% when compared to current capabilities.

Gallium nitride (GaN) is a material used in power electronics. It can be used to create low-cost power devices that have performance limits that stretch beyond those of silicon, as well as enable power converters with efficiencies above 99%. It is the ability to grow high-quality epitaxial GaN layers upon silicon substrates that have made this possible.

As mentioned above, GaN power devices are still far from their theoretical maximum performance limits despite this.

Even though devices with higher breakdown voltages than that of the above transistor have been demonstrated, some as high as 5 kV, the simultaneous demonstration of ultra-low on-resistance and high breakdown voltage has proven challenging. The typical approach to decrease on-resistance is the use of multiple AlGaN/GaN channels stacked in parallel. The more of these that are added, however, the harder it becomes to pinch device channels off, especially those located further from the surface.

Taking an alternative approach than the above and the use of field platesâ€”these are comprised of stepped gate structures with increasing dielectric thickness and are used in planar GaN device structuresâ€”a slanted tri-gate is used.

The slanted tri-gate replaces field plates: they involve fins of increasing lateral dimensions from the source towards the drain contact, an approach that was first applied to single-channel devices by the researchers.

As a result, the threshold voltage increases along the fin direction. This is because a higher side-gate voltage must be applied to pinch off the channel as it gets wider. Effectively, this spreads the electric field across a wider region and enables devices to withstand a greater voltage.

While maintaining a low on-resistance and off-current, a 20-fold enhancement in breakdown voltage is achieved, taking it to 1.2 kV.

This work is a major step forward for GaN power devices, however, challenges remain, namely in terms of being able to manufacture it at a low cost due to the electron-beam lithography that was used to fabricate its fin structures. Additionally, the reliability of the device remains untested and current-voltage curves reported in the work suggest that there may be challenges surrounding thermal management.