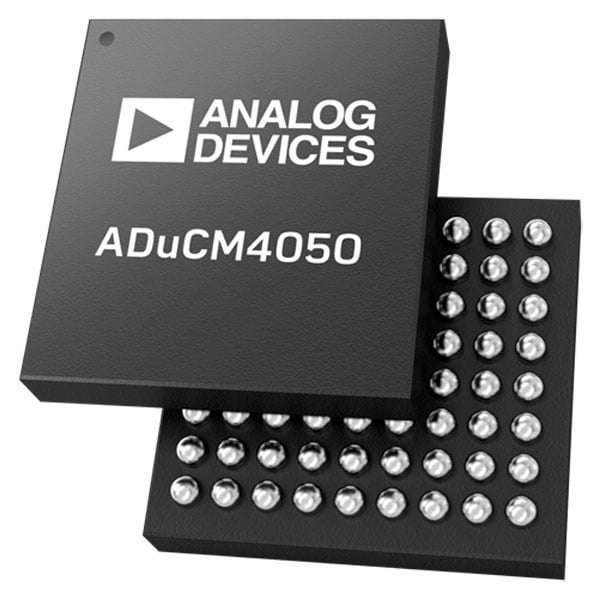 ADuCM4050 microcontroller unit (MCU) by Analog Devices is an ultra-low-power integrated system that utilises an ARM Cortex-M4F processor. Applications for these components include internet of things (IoT), smart systems for agriculture, building and metering, sensor networks and more.

The ADuCM4050 features a 52MHz ARM Cortex-M4F processor which is a 32-bit reduced instruction set computer (RISC). In its memory unit, it has 512Kb of embedded flash memory, 128Kb of static random access memory (SRAM) and a cache controller where 4Kb of instruction SRAM is reserved as cache memory.

This device has a variety of functional modes such as active, flexi, and hibernate modes. These modes enable it to regulate power efficiently depending on the application, thus extending battery life. In the active, flexi, and hibernate modes, the microcontroller consumes 41 Î¼A/MHz, 400ÂµA, and 0.65 Î¼A respectively. It also has a buck converter for efficient power management.

The ADuCM4050 microcontroller features security mechanisms such as a true random number generator (TRNG). Other security features offer read protection and safeguards against unauthorized access to modify critical parameters in the microcontrollerâ€™s registers, flash memory and SRAM. Additionally, the ADuCM4050 has cryptographic accelerator functions such as big-endian and little-endian. AES-128 and AES-256 and SHA-256 encryption standards are fully supported.

Other key features are as follows:

Comparison with Other Ultra-low Power Microcontrollers

The ADuCM355 ultra-low power microcontroller and can be interfaced with chemical sensors. With compatibility for gas detection systems, bio-system analysis, and spectroscopy functions. Like ADuCM4050 microcontroller, ADuCM3029 and ADuCM3027 also finds applications in IoT projects to build smart and intelligent systems.

The ADuCM4050 is suitable for applications requiring low power usage. With the active, flexi, and hibernate modes, it is capable of managing power efficiently. It finds applications in IoT where it can be used in systems like smart metering and smart building. It can also be integrated into clinical, fitness and wearable devices. Since it is an embedded system device, machine learning and neural network algorithms can be deployed on it. The device supports SPI, UART, and I2C ports.