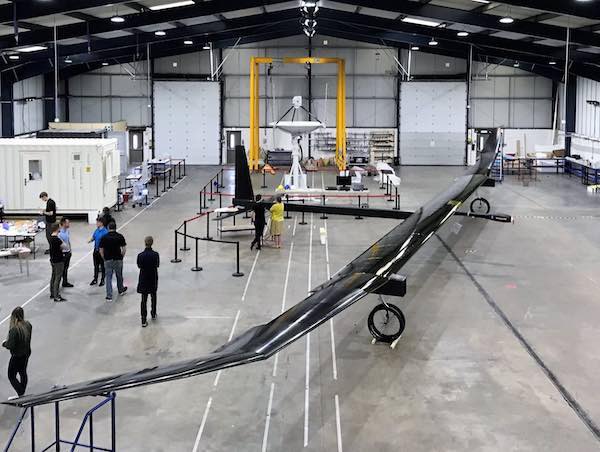 BAE has reached an agreement with Prismatic, a British SME, to acquire its operations as the two companies work together to further develop UAV technology.

The PHASA-35 is an Unmanned Air Vehicle (UAV) with the potential to transform the Air and Space market. Using long-life battery technology and lightweight solar cells, it is able to maintain flight at 65,000 feet for up to a year. It offers a more cost-effective alternative to conventional satellite technology.

The PHASE-35 is now being prepared for trials.

The Purchase of Prismatic by BAE

In May 2018, BAE and Prismatic announced their initial collaboration and engineers have been hastily working to develop two 35-meter solar-powered prototype UAVs and various operational concepts.

Just 15 months later, the BAE-Prismatic team has managed to develop and deliver two full-scale prototype model aircraft that are now undergoing thorough integration testing at BAE's Warton facility in Lancashire, England. BAW has indicated that preparation for flight trials has been planned for early 2020.

Nigel Whitehead, Chief Technology Officer at BAE Systems, said, â€œThe UK is a world leader in combat air technology and bringing together the best of British expertise is critically important to drive future technological innovation that will ensure we retain this enviable position. Working together with Prismatic, weâ€™re pushing technological boundaries to develop a revolutionary solar-powered aircraft at an incredibly rapid paceâ€¦ thatâ€¦ could enter initial operations with customers within 12 months of flight trials."

Whilst the specifics of the acquisition have not yet been disclosed, the founder of Prismatic has stated that its transition to becoming a part of BAE Systems gives his staff access to expertise in systems integration and other disciplines that will help the PHASA-35 reach deployment quicker.

The PHASA-35 (Persistent High-Altitude Solar Aircraft) us powered by solar panels. During the day, these panels charge the batteries that run the engines at night. Weighing in at 150kg, the UAV operates in the upper atmosphere and has the potential to deliver 5G network connectivity, as well as other services such as surveillance, at a fraction of the cost of deploying a satellite. There is also interest in the ability for UAVs like PHASA-35 to deliver internet coverage to unconnected regions such as remote areas, mountainous regions, and deserts.

Due to its ultra-thin carbon fiber construction, PHASA-35 is not only lightweight but also highly aerodynamic. This allows it to fly at high altitudes for prolonged periods of time. The BAE-Prismatic team is also working with the University of Manchester to develop a UAV with 'flap-free' technologies that could also be used on PHASA-35. 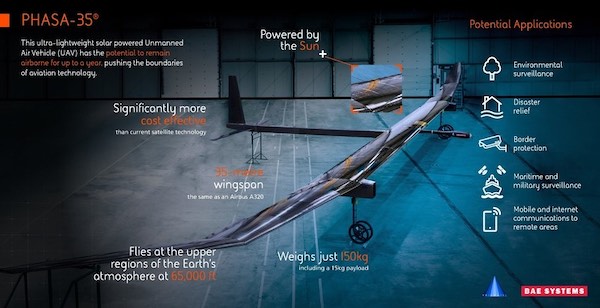 Prismatic Ltd, a UK-based company, was formed around three leaders in the small satellite and HALE UAV industry. The company now develops new and improved UAV systems and services.

What is BAE Systems?