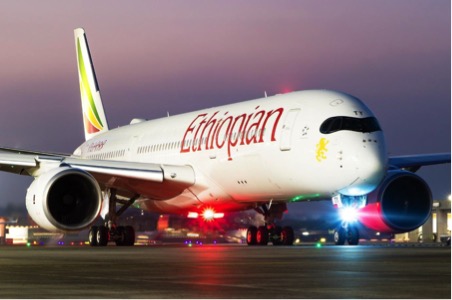 Within five months of one another, two Boeing 737 MAX jets crashed, none of the passengers survived. Preliminary black box data has identified an electrical flight system as the possible culprit, but what exactly happened?

Recently recovered black box data from the wreckage of the doomed Ethiopian Airlines Boeing 737 MAX suggests that it was the premature activation of the MAX 8's anti-stall system that sealed the fate of the 157 people aboard the flight on March 10th of this year.

In response to the crash, occurring just five months after 189 people perished in October 2018 after a Lion Air 737 MAX aircraft crashed in Indonesia, Boeing grounded the entirety of its global fleet of 737 MAX aircraft.

Between both these crashes, there are some common elements and occurrences.

First, both jets were the same, brand-new models and, second, in both cases, the pilots reported airspeed problems and requested an emergency landing almost immediately after takeoff. It is these similarities that have raised suspicions surrounding the new Boeing 737 MAXâ€™s software that manages electrical flight controls.

The engines used on the Boeing 737 MAX jets are also larger than those on its predecessor, the 737-800. During the production phase, Boeing noticed that these larger and heavier engines were causing stability problems at lower speeds and duly corrected it with a software patch to the Boeingâ€™s electrical control system.

Unfortunately, itâ€™s suspected that the problems werenâ€™t related to the software but a design flaw that couldnâ€™t be resolved through a software update.

What Happened to the Ethiopian Airlines Flight?

Taking off from Addis Ababa at 08:38 local time, Flight ET302 was scheduled for a regular two-hour flight to the Kenyan capital of Nairobi.

Six minutes later at 08:44, it crashed 30 miles close to the town of Bishoftu, 30 miles southeast of its departure airport.

Prior to the crash, ET302's captain, Yared Getachew, with over 8,000 hours flight time, reported difficulties and asked to return to Addis Abada.

Both jets involved in these crashes were Boeing's 737 MAX 8s: the result of a race between Boeing and rival Airbus to launch the next-generation of fuel-efficient and cost-effective aircraft.

The New Electrical System That May Have Caused The Crashes

While both crashes are still under heavy investigation and there has been no final word on why the crashes occurred or what caused them, both investigations have focused on two issues that may have forced both aircraft into a fatal nosedive.

When development of the 737 MAX began, Boeing engineers had to find a way to fit a heavier, larger engine under the wing of the single-aisle jetâ€™s landing gear.

Using LEAP-1B engines instead of CFM56-7 engines, the MAX 7s are more efficient, use less fuel, produce 14 per cent fewer carbon emissions, and fly faster and farther. The tradeoff, however, is that the LEAP-1B engines make the MAX 8s around 3,000 kilograms heavier.

To compensate for this new, heavier engineâ€“â€“something that causes the jet to pitch its nose upwards temporarilyâ€“â€“the 737 MAX 8 automates anti-stall measures using MCAS. Boeing did this because the heavier engines change the jetâ€™s centre of gravity, thus increasing the risk of a stall.

A recent preliminary report published by the Indonesian investigators has indicated that Lion Air Flight 610 may have crashed because a faulty sensor indicated that the MAX 8 was stalling. 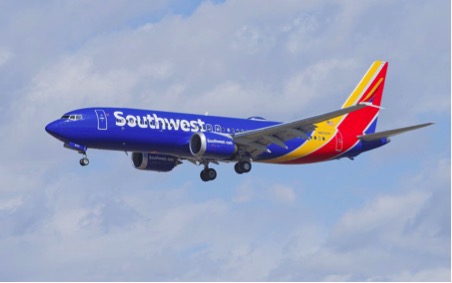 This false indication of an imminent stall then triggered the MAX 8's automated MCASâ€”Manoeuvring Characteristics Augmentation Systemâ€”an anti-stall system that points the aircraft's nose down so that it can gain additional speed.

Investigators have noticed similarities in the data from both flights that points to this.

Additionally, a piece of the MAX 8's stabiliser discovered in the Ethiopian Flight ET302 wreckage exposed that the trim was set in an unusual position, similar to the position that Lion Air Flight 610's was set.

The MCAS's problems led to a backlash from pilots, though.

To do its job, MCAS pulls readings from two sensors that measure to what degree the MAX 8's nose is pointing either up or down relative to current airflow.

When the sensors detect that the plane is pointing up at a dangerous angleâ€”an angle that could cause the MAX 8 to stallâ€”it automatically pushes the nose's angle down.

This system is unique to Boeing's MAX jets; it was added to compensate for the fact that the relocated enginesâ€”engines that are larger and positioned slightly more forward and higher up to improve fuel efficiencyâ€”caused the MAX's nose to pitch skyward. Because of this, the nose could get too high and cause a stall. 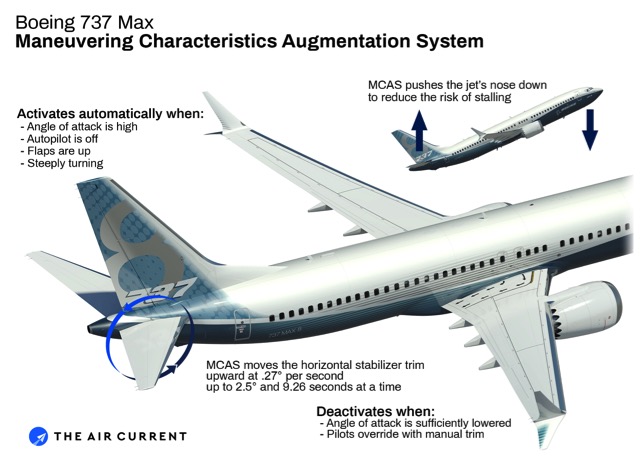 Image courtesy of The Air Current.

Since MCAS is sensor-controlled and activated without input from the jet's aircrew, this has led to a backlash from several 737 MAX pilots and several complaints related to the plane suddenly descending that have caught pilots off-guard.

Boeing began to work on a fix to MCAS following the Lion Air accident. Due to engineering challenges and disagreements between experts, its January release date was not met.

Why Didn't the Pilots Regain Control?

Both Flight ET302 and Flight 610 lacked a very simple safety feature that could have stopped both these crashes from happening: a warning light.

This warning light, something that would have alerted flight crews to a discrepancy between the two of the MAX's sensors, was sold as an optional extra. These were not part of either Lion Air nor Ethiopian Airlines' equipment packages.

In response, Boeing will stop charging extra money for this safety feature and it will come as standard in all new 737 MAX jets.

Furthermore, a lack of training may have had a part to play here.

When MAX jets were in development, regulators came to the conclusion that extensive retraining was not necessary because they were "essentially the same" as previous 737 generations. This, of course, saved Boeing a whole lot of money on extra retraining.

Instead, pilots primarily learned about the new 737 MAX's features on iPads and while United Airlines pilots created a 13-page guide on the 737 MAX, it did not mention MCAS at all.

The pilots' lack of knowledge surrounding MCAS is perhaps illustrated best by the doomed Lion Air Flight 610 cockpit recording that reveals how its pilots scrambled through an instruction manual during the final seconds before impact. In fact, it has been claimed by some that the pilots were not aware of the planeâ€™s anti-stall system, period. A claim strengthened by the fact that the Ethiopian Airlinesâ€™ crew spent the entirety of the minutes-long flight fighting against the anti-stall system.

At present, all this is mere speculation.

As investigations continue to take place, we will likely hear more in the coming weeks.