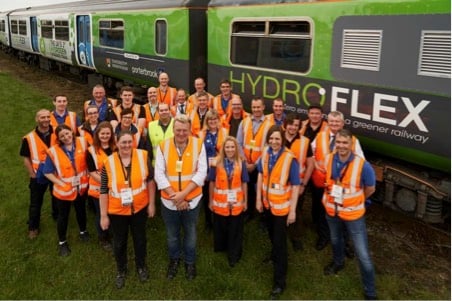 BCRRE, Birmingham University's Centre for Railway Research and Education, in partnership with Porterbrook, announced last week that the UK's very first hydrogen train will soon be tested on the railway following a successful proof of concept.

Described as "mini power stations on wheels" by the Birmingham team behind the train, dubbed â€˜the HydroFLEXâ€™, this zero-emissions train is a huge leap forward for greener public transport.

Unlike diesel-powered trains, HydroFLEX trains do not emit any harmful gases or by-products. Instead, the trains use hydrogen and oxygen to produce electricity, water, and heatâ€”it is a fully green, renewable fuel.

At present, only two other hydrogen-powered trains exist. The two trains that are currently in active service can be found in Germany, and Britain is hoping to become the next country to begin running them.

How the HydroFLEX Works

It is important to note that the HydroFLEX is a mere prototype that has been given the go-ahead to be tested on Britain's live rail network. It is not capable of carrying any passengers yet and it is likely that the entire train will need to undergo significant design changes prior to its commercial use.

This is because on the HydroFLEX, its hydrogen tanks, batteries, and fuel cell are all stored inside one of the carriages where passengers would usually sit. In future models, this equipment will ideally need to be stored away above and/or beneath the train itself. 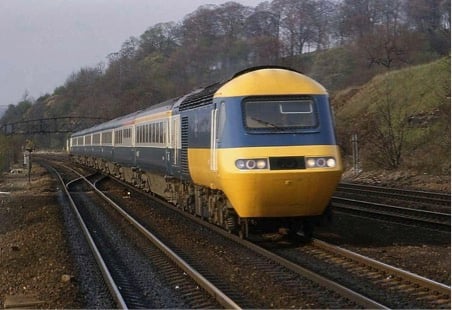 A UK railway in use. Image courtesy of Trainline.

The key tech behind hydrogen propulsion systems is the fuel cell. A fuel cell converts the chemical energy inside hydrogen to generate electricity. Water and heat are produced as by-products to the chemical reaction.

A fuel cell operates in an inverse to the process of electrolysis that is used to create the fuelâ€”pure hydrogen is consumed to create electricity rather than electrical energy being consumed to produce hydrogen.

There are some energy losses, though. It is reported that the efficiency of converting electricity to hydrogen and back again is a little under 30 per cent. This is comparable to classic diesel engines but less than electrical traction that uses diesel engines in tandem with overhead wires.

The electricity that is produced by the fuel cell would then be sent to a motor that propels the train.

Why Is This Happening Now?

It is estimated that almost one quarter of all Britain's trains run off diesel and two-thirds of the rail lines across the network do not have overhead power lines. Some trains operate on what is known as â€˜bi-modeâ€™, where diesel power is used in areas where no electric cabling is available.

By 2040, however, the government wants diesel-powered trains to be banished completely.

It is a very difficult job to install overhead powerlines and almost impossible to begin electrifying existing rail lines. In regional areas on routes where few passengers are carried, the economic inefficiency of doing this means that unless an alternative to diesel-powered trains is realised, the government's goal of decommissioning them is unlikely to be achieved.

Since 2010, according to Department for Transport statistics, only 248 miles of rail line has been electrified in the UK. As of January 2018, only 36 per cent of the UK's rail network was electrified.

This is where trains such as HydroFLEX come in.

It is hoped that they will be carrying Britain's passengers on selected lines in as little as two years.

â€œ[W]e are tremendously proud to have played a key role in designing and building the UKâ€™s first hydrogen train. This is a first test but we are excited about being in a position to provide HydroFLEX as a viable offering very soon. Britainâ€™s railway has a key part to play in reducing transport emissions and we are committed to helping our customers play an important role in delivering this.â€

To read more about revolutionary power systems, check out our research article on hydrogen-powered EVs, and our product piece on an automotive PCB fuel cell.