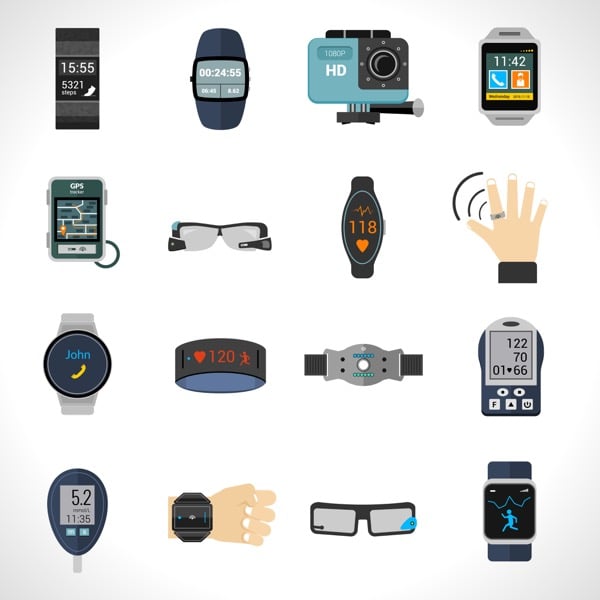 With medtech innovation on the rise, doctors and patients alike are turning to medical wearables to create more cutting-edge approaches to healthcare. And despite some public hesitation (largely due to their novelty), medical wearables have extensive benefits—and engineers are continuously conjuring ways to act on medical needs using the technology.

The Role of Wearables in the Healthcare and Medical Industries

Wearables have a wide variety of uses in the medical and healthcare industries, including but not limited to:

One of the major benefits of wearables is that they can predict and prevent health problems that a patient is prone to before they arise. Wearables are able to track multiple aspects of a patientâ€™s health status, thus allowing for a large amount of data to be collected that can be used for artificial intelligence and machine learning. In fact, some wearables can assist in diagnosing some illnesses before they even arise, and this allows doctors to predict and act on potential health issues before they surface (rather than having to treat the disease in its advanced stages).

While there are, however, certainly advantages to gathering big data (like eliminating unnecessary hospital visits, cutting treatment time in half, and having better data-driven decisions), there are downsides to keep in mind, as wellâ€“â€“privacy and safety concerns, alongside staff hesitation, being some of the main drawbacks.

Another key factor that wearables play in the medical and healthcare industries concerns insurance premiums. Traditional health insurance is quickly being replaced by premiums, which track fitness and health data through wearables; thus, each individualâ€™s lifestyle habits and general health status are now filed more easily than ever before.

Insurance companies then calculate the customerâ€™s risk of developing health problems and determine their insurance premiums accordingly: naturally, clients who engage in unhealthy behaviours (like smoking and living a sedentary lifestyle) will have to pay higher insurance premiums.

The use of wearables, therefore, encourages longterm healthy living habits, giving people the opportunity to pay lower premiums by their being able to monitor their own health stats and take control of their wellbeing.

Reminding people to take their medications is another way in which wearables assist in the medical industry. By tracking when people take their medications and reminding them when to do so, wearables allow healthcare providers to be in-the-know about whether or not their patients following their prescriptions. Plus, wearables collect patient data over time, effectively providing doctors with a complete reportâ€”so they donâ€™t have to solely rely on patientsâ€™ medical history, when the illness began, and, generally, what their patients tell them during appointments. Because wearable devices collect data on patients in the moment, without delays, there is no room for mistakes to be made in health status reporting: doctors ultimately receive an exhaustive report on their patientsâ€™ health status, so they can act and progress with the best treatment accordingly.

The Cost of Wearables

While wearables may appear to be expensive for the medical industry in the short term, they are actually cost-efficient in the long term: they allow doctors to track their patientsâ€™ conditions from afar, which frequently eliminates the need to transfer them to a medical facility, as they can identify potentially problematic symptoms in advance. 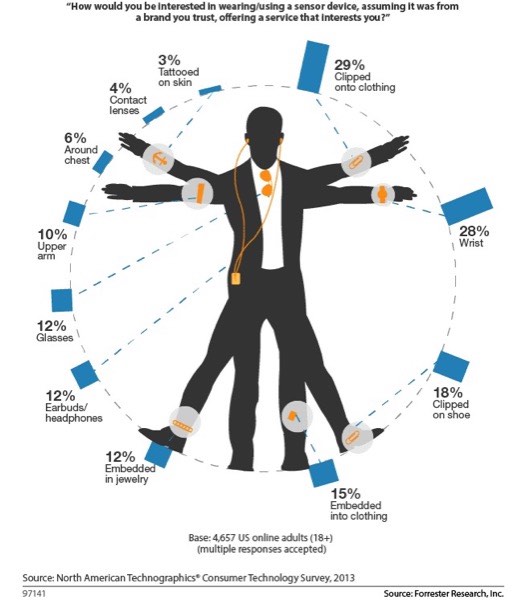 An annotated diagram of a man that is used to demonstrate survey respondentsâ€™ preferences when asked which part of their person they would be most comfortable with wearables being placed upon. The highest-rated response, at 28%, is their clothing; and the lowest, at 3%, is on their skin (tattooed). Image Credit: Mouser.

Wearables Designed for the Medical Industry

The number of wearables being designed for the medical industry is extensive, and their uses vary. Common uses include monitoring blood pressure, blood sugar, heart rate, and sleep patterns.

Implantables are one of the most popular types of wearables, and their operation involves them sensing parameters of many types of diseasesâ€”before either transferring the resultant data to a remote centre, directing patients to take a specific action, or automatically performing a function based on the reading of the sensor.

In what is also a strong use of sensing technology, researchers at the University of Illinois have shown how to put electronic sensors into temporary tattoos, which are unaffected by skin twisting, wrinkling, and bending. They also discovered that these micro-electronics can facilitate the irritation-free monitoring of electrical signals from the muscles and brain. Smart tattoos vary in terms of use, and include muscle stimulation, monitoring heart arrhythmias (irregular heartbeats), and even serving as a human-computer interface (when placed on the throat, vocal cord vibrations are then used to control a computer).

But while there are certainly benefits to implantables, one must keep in mind that voluntary patient participation is crucial, as is making sure the implantable is designed in a way that is, to quote the IEEEâ€™s Engineering in Medicine and Biology Society: â€œinexpensive for the payer, unintimidating for the user, and both accurate and reliable for everyoneâ€.

Another type of wearable benefiting the medical industry is the wearable biosensor, which is a combination of wearable objects and biosensors. Electrical engineers have constructed wearable biosensors to be made up of three critical parts: a bioreactors system, transducer, and output system. Thanks to such technology, the result of a foreign substance reaction in the wearerâ€™s body is apparent in the form of messages that can be analysed by a microprocessor, and communication systems based on these sensors can serve to either stimulate, display, or treat human biophysics performance accordingly.

Because wearables are defined as objects that can be worn on the body, a wearable biosensor can range from bandages to smartwatches and include anything in between.

The benefits of wearable biosensors are extensive: for instance, they allow real-time information to be sent from doctors to patients; they control emergency room usage to prevent overcrowding; and they help to both detect and prevent heart health issues, such as heart disease and abnormal heart failure. One of the main draws of wearable biosensors is their ability to detect hypertension, which can result in cardiovascular disease later in life if left undetected or unmanaged.

The cons of wearable biosensors, however, are that they have a high initial cost, they are ultimately limited in how many physiological parameters they can measure, and their recovery time is inefficient. 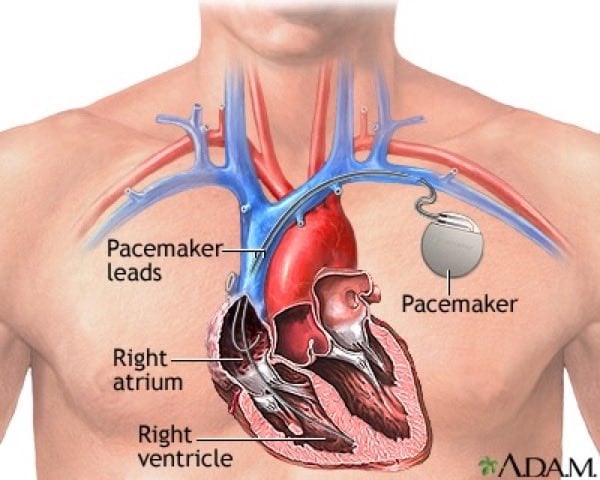 A cardiovascular diagram that displays a pacemakerâ€™s position in relation to the heart. Image Credit: MedlinePlus Medical Encyclopedia.

Cloud-connected devices are also on the rise, particularly for heart health. Among the most popular of these devices is a pacemaker. Operated by cloud technology, many people use pacemakers to maintain healthy heart rhythms, having been affected by conditions such as previous heart attacks or ventricular tachycardia. Pacemakers are simple to install and maintain, and they give users the opportunity to monitor and take control of their heart health.

These devices operate by connecting the body to the IoT, enabling incoming data from machine sensors to be analysed, allowing for decisions to be made about whether or not to start predictive maintenance.

An example of how predictive maintenance is brought into effect is â€˜white coat syndromeâ€™ and blood pressure monitoring, in which a patient can have normal blood pressure readings when calmly measuring them at home, but be mistakenly diagnosed with hypertension (or high blood pressure) while at the doctorâ€™s office due to anxiety in regard to the medical environment (hence the â€˜white coatâ€™ name). Predictive maintenance allows patients and doctors to come together to not only solve such a problem, but get to the root of it, too.

While cloud-connected wearables are beneficial (for reasons including heart health monitoring and predictive maintenance), they are also faced with scepticism in the medical industry due to the threat of potential data leaks. Patients face the risk of being vulnerable to hackers, after all. It is also a challenge at times to process these large quantities of data. That being said, big data can also improve oneâ€™s quality of life overall and make electronic medical records more effective.

Though wearables are still fairly new to the medical and healthcare industries, strides are being made to continue developing them and incorporate them into medical practices. Engineers must continue to develop applications for the medical field that will make a difference. Advanced healthcare applications like fitness sensors and telemedicine reflect the fact that engineers are helping companies to utilise data for the greater good of the patient (for example, by offering the technology to both monitor and manage chronic health conditions).

However, while applications created for basic health and fitness monitoring are a positive addition to the medical field, engineers areâ€“â€“and must continue to beâ€“â€“delving into more complex technologies to assist in the medical world (consider Google Glass, which can not only aid surgeons, but help with the telecare market in countries like India).

Hopefully, within the next few years, even more advancements in these technologies will be brought to the fore.