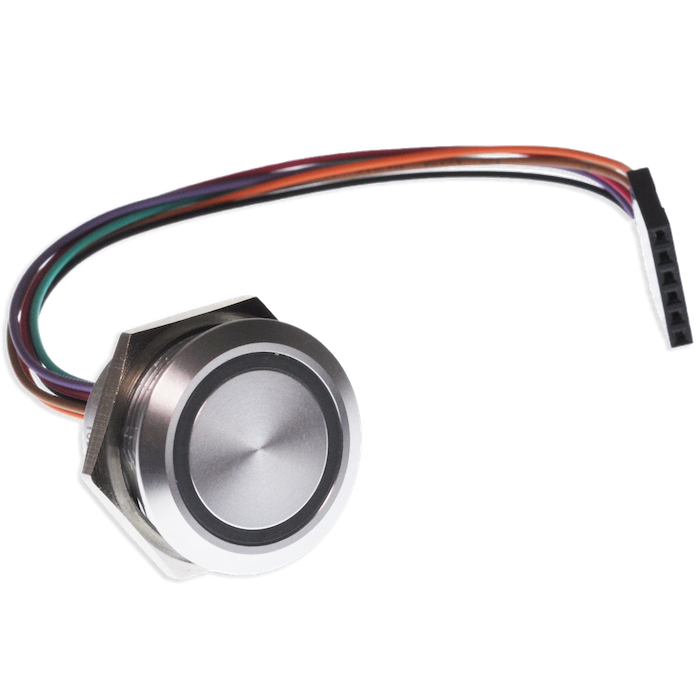 E-Switches CS Series is an anti-vandal touch-sensitive electrical switch that helps deter tampering or damage to locations, applications, or devices, especially those in public settings.

Pedestrian crosswalks, traffic lights, appliances and security keypads for buildings or offices offer a few examples of its myriad of potential applications. As a single pole single throw (SPST) switch and touch sensor, it also detects harsh or abusive treatment.

It also measures the change in capacitance when pressed. This works because the finger is a dielectric that behaves as a conducting plate when exposed to the field generated by the circuit inside of the switch. This touch sensing method is known as capacitive switching or capacitive sensing technology. 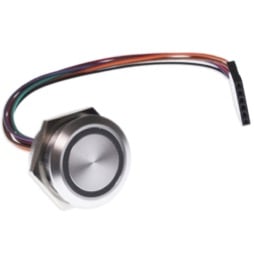 There are also two illumination styles for the circumference of the lens on the top; either a simple ring or a ring with the addition of a power switch symbol inside of it. The illumination options for these ring styles are red, green, or blue.

The switch is constructed with a clear, anodised aluminium finish and a flat button style. This combination not only limits typical wear and tear but makes it hard for vandals to pry it open.

The device is designed to be mounted onto a panel, and buyers can choose a panel cutoff size of 19mm or 22mm in diameter. Since it is designed to operate in conjunction with a microcontroller, it has a 150mm long wire attached to a six-pin panel connector. This connector has a thickness of 10mm maximum.

The switchâ€™s contact rating is from five to 24 VDC at 1A, with a contact resistance of one Ohm maximum. It continues to function when it is very hot or cold; its operating temperature is âˆ’20oC to 65oC, and its storage temperature is âˆ’25oC to 65oC. When operated at full load, the switch has a long electrical life of 50 million (50,000,000) cycles.

It is RoHS-compliant in order to ensure that it minimises the introduction of hazardous substances into the environment.

Connector Wiring for Testing and Production

For connector wiring, pin 1 is ground, while pins 2 to 4 are LED terminals that are to be connected to the microcontrollerâ€™s I/O. Pins 6 and 5 handle the operating voltage and the load.

For testing purposes prior to production, E-Switch recommends that an external IC or similar load be used with the different LEDs set to ground for various switch operations.

A sample setup is given on the datasheet available on the companyâ€™s website. The documentation shows the colour scheme and discusses a use case where the green LED lights for the on-state while the red one is the default when the switch is off. This design is also relevant for production purposes.

Other examples with different setups are available on the E-Switch website. The company may also be contacted directly for advice. ICs or other loads may require components (such as resistors) for protection. This will be specified by the loadâ€™s manufacturer.

The CS Series is handy when there is a need for an electrical switch that resists attempts at tampering or damage or usage from unauthorised personnel.

Applications include solutions for consumer, retail, residential, audio-visual, telecommunications, and the medical market.

E-Switchâ€™s CS Series is a touch sensor designed to help protect devices from damage, tampering attempts, and harm due to ill or incorrect usage. With a connector optimised for operation in devices that require a microprocessor, the CS Series is a convenient choice for consumers, as well as professionals in various areas, such as retail and medicine.