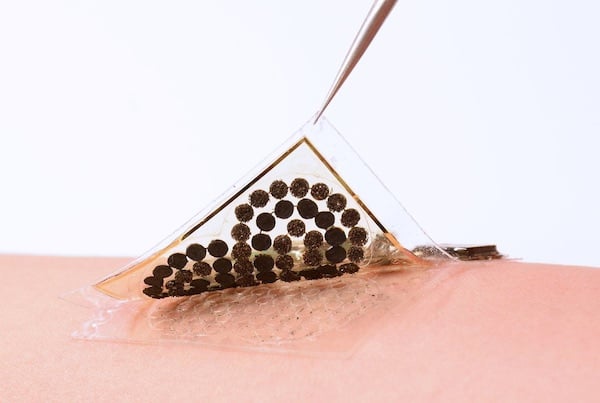 Scientists have developed an electronic skin that converts sweat into electricity. The battery-free device is said to be able to monitor health signs and able to control a robotic arm.

This is what researchers from the Andrew and Peggy Cherng Department of Medical Engineering claim. The team, led by assistant professor Wei Gao of Caltech, has developed the electronic â€˜e-skinâ€™ for direct application to human skin.

The teamâ€™s work was published in the journal Science Robotics and outlines how their e-skin builds on existing sensing platforms, that are equipped to monitor physical parameters and rely on power from batteries and/or near-field communication, by enabling it to operate wirelessly and power itself via perspiration.

Made from soft, flexible rubber, the teamâ€™s e-skin can be embedded with sensors for health monitoring through the measurement of heart rate, body temperature, metabolic by-products, and blood sugar. The researchers also claim that the e-skin can monitor nerve signals that control muscles. It is able to do all of this and power itself through the use of biofuel cells that are powered by human sweat, which contains high levels of lactate.

â€œOne of the major challenges with these kinds of wearable devices is on the power side,â€ Gao said in a statement. â€œMany people are using batteries, but thatâ€™s not very sustainable. Some people have tried using solar cells or harvesting the power of human motion, but we wanted to know, â€˜Can we get sufficient energy from sweat to power the wearables?â€™ and the answer is yes.â€ 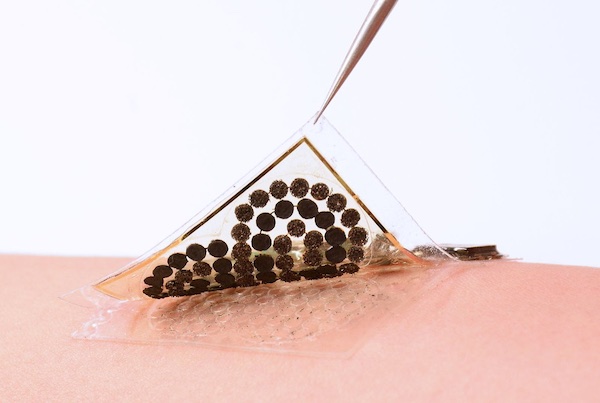 The chemical lactate can be absorbed by the fuel cells and combined with atmospheric oxygen, generating pyruvate and water, by-products of metabolism. As they operate, the biofuel cells can generate enough energy to power sensors and Bluetooth, enabling the e-skin to wirelessly transmit readings from its sensors.

To test out the device, the researchers asked a trio of cyclists to donate their sweat to the cause. The cyclists had the e-skin placed on their foreheads and cycled on exercise bikes. As their sweat filled up a reservoir in the device, health data was transmitted to a user interface. Next, the researchers controlled a prosthetic limb using the e-skin by applying it to a cyclistâ€™s arm and wirelessly connected it to a robotic arm on a table. The robotic limb was able to follow this cyclistâ€™s gestures to grab an object.

The teamâ€™s e-skin is not a new development; other e-skins have previously been used to monitor physical parameters like health signals, however, these require power from sources that limit the technologyâ€™s usefulness. For example, recent works that utilize self-powered e-skin with the ability to perform biosensing with Bluetooth are limited because of the lack of a continuous energy source.

In contrast, the Caltech teamâ€™s battery-free e-skinâ€™s highly efficient lactate biofuel cells use a unique mix of zero- to three-dimensional nanomaterials to achieve high power intensity and stability. According to the researchers, their e-skin has achieved a â€œrecord-breaking power densityâ€ of 3.5 milliwattÂ·centimeterâˆ’2 and displayed stable performance over a 60-hour continuous operation.

â€œWhile near-field communication is a common approach for many battery-free e-skin systems, it could be only used for power transfer and data readout over a very short distance,â€ Gao said. â€œBluetooth communication consumes higher power but is a more attractive approach with extended connectivity for practical medical and robotic applications."

A Variety of Sensors to Come

The biofuel cells are made from carbon nanotubes integrated with a platinum or cobalt catalyst and composite mesh that holds an enzyme to break down lactate. The cells can put out several milliwatts of power per square centimetre.

Gao plans to develop a variety of sensors that can be embedded in the e-skin, expanding its range of potential applications. â€œWe want this system to be a platform.â€ he stated.