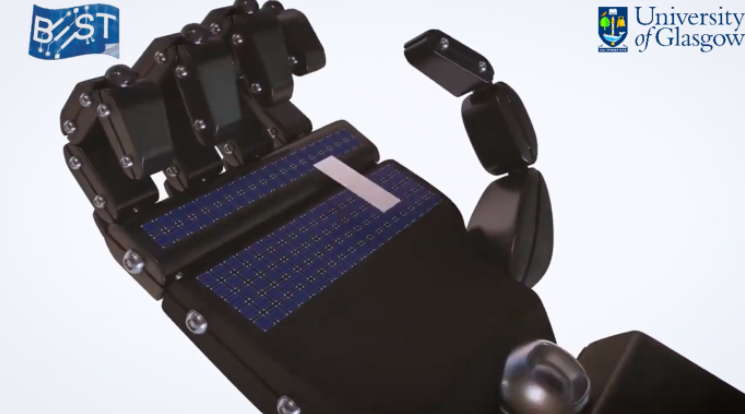 Researchers at the University of Glasgow have developed a new type of solar-powered e-skin that uses light to mimic the human sense of touch. The scientists claim that the ‘skin’ could hold the potential to truly revolutionise the field of affordable prosthetics by using its light-capturing cells to mimic touch.

In the Glasgow Universityâ€™s paper, published in IEEE Transactions on Robotics, the researchers describe how a robotic hand wrapped in their flexible solar e-skin is capable of interacting with physical objects, enabling it to sense the shape and proximity of objects in its grasp.

By using calculations based on the level of light received by the deviceâ€™s solar cells and LEDs, the researchers have been able to eliminate the use of dedicated touch sensors (commonly found in conventional prosthetics) that are expensive and power-hungry.

In addition to the above-mentioned light-based calculations, the technologyâ€™s standard LEDs in-between the solar cells bounce infra-red light off nearby objects to measure distance.

When combined, the two forms of light measurement give the skin a sense of â€˜touchâ€™ that could massively enhance prosthetic limbs and robotics. During lab-based testing, the research team was able to use a prototype robotic hand to grasp objects placed in front of it.

Said Professor Ravinder Dahiya, the research teamâ€™s leader at Glasgowâ€™s James Watt School of Engineering: â€œItâ€™s one step closer to a completely self-powered prosthetic wrapped in flexible skin made from relatively inexpensive componentsâ€. Dahiya went on to add that the sensing capabilities built into the skin could enable it to â€˜seeâ€™.

The researchers are so confident in their e-skin, in fact, that they claimâ€”with further refinementsâ€”it could identify approaching objects before they even make physical contact. 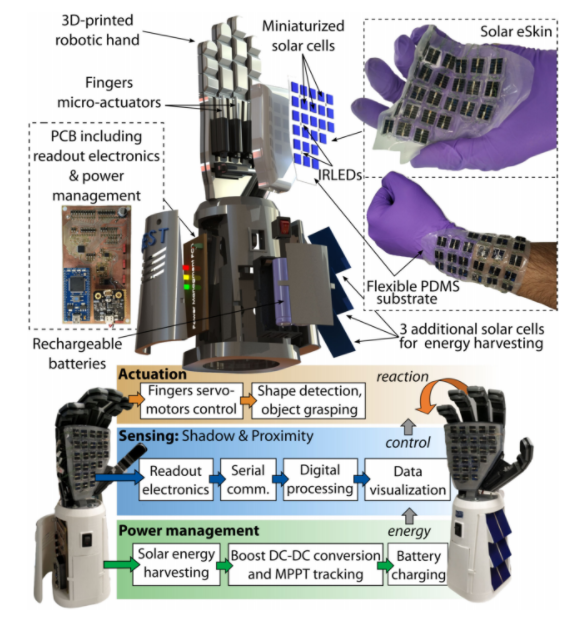 Professor Dahiya says that the lack of sensors in the e-skin means that it requires â€œno conventional power source.â€ He added that the skin itself is the source of energy capable of powering the hand and any devices attached to it.

â€œItâ€™s one step closer to a completely self-powered prosthetic wrapped in flexible skin made from relatively inexpensive components. The sensing capabilities built into the skin could even lead to a skin that can â€˜seeâ€™â€”further refinements could help the skin identify approaching objects even before they make contact,â€ he explains.

The team plans to experiment further with their e-skin: for example, by adding supercapacitors so that the skin can continue operating in the absence of daylight.

More information on the University of Glasgowâ€™s prosthetics technology can be read here on Electronics Point.