Last year, U.S. company Honeywell announced its plans to release the world’s most powerful quantum computing hardware, the System Model H1, with a ‘quantum volume’ of at least 64 (more than twice the volume offered by IBM Q). We discuss the significance of the H1’s high quantum volume as well as the system’s overall potential.

Honeywellâ€™s announcement, originally made in March, 2020, goes hand in hand with its scientific paper (also from Q1, 2020), in which the company demonstrated its quantum charge-coupled device (QCCD) architectureâ€”a major step forward in accelerating quantum capability.

Originally intended to be delivered within three months of the original 1st of March 2020 announcement, Honeywellâ€™s quantum computer was finally announced almost eight months later at the end of October 2020.

Named â€˜the Model H1â€™, the quantum computing system uses trapped-ion technology (discussed below) and features ten fully connected qubits (a big increase from the proceeding Model H0, which had six). This allows the system to reach a quantum volume of 128, which is double Honeywellâ€™s original target of 64. This is well beyond comparable efforts by companies like IBMâ€”which delivered its highest quantum volume system of 64 in August 2020.

Enterprises will be able to access the Model HQ through the Azure Quantum platform. Honeywell says that it will be partnering with both Zapata Computing and Cambridge Quantum Computing on the project.

The Model H1â€™s Use of Trapped Ion Technology

The Model H1 uses ytterbium ions for computations and barium ions for cooling. This is achieved via QCCD, the advanced trapped-ion architecture that enables the arbitrary movement of ions and parallel gate operations across multiple zones. QCCD, which has been the subject of several research efforts, has high fidelity operations, mid-circuit measurements, and low crosstalk. Honeywell says that it will be used to support future generations of Honeywell quantum processors.

According to Honeywell, the Model H1 is capable of accommodating up to 40 ion qubits. And because of its architectural flexibility and the potential qubit capacity of its QCCD architecture, Honeywell will be able to upgrade its H1 generation of supercomputers with up to 40 qubits, higher fidelity, and unique feature modifications. 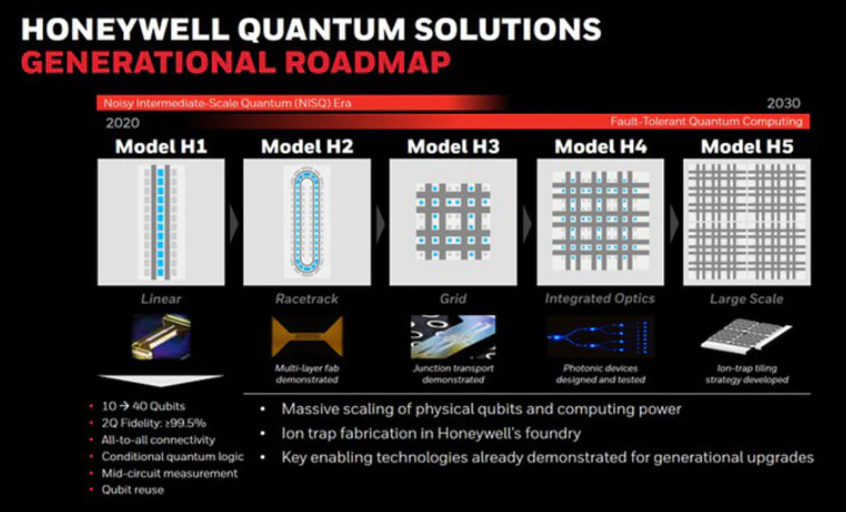 Another Turning Point for Quantum Computing

With its Model H1 now complete, Honeywell is already working on Model H2 as per its quantum solutions roadmap (pictured above).