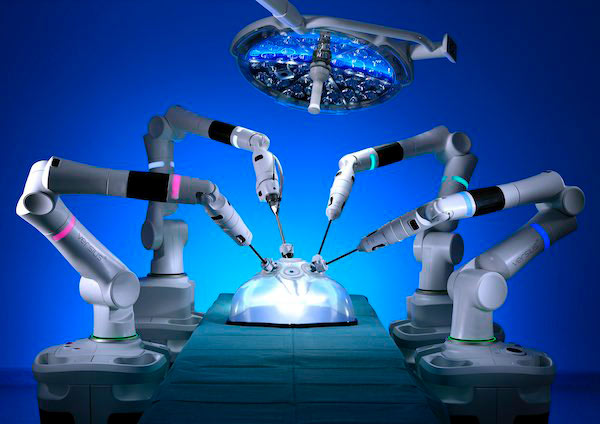 Versius, which is helping NHS surgeons perform their jobs better, faster, and for longer, is poised to make keyhole surgery a more viable treatment option and bring its benefits to the masses.

Of the roughly 12 million abdominal and pelvic keyhole procedures performed annually, only around 50% of these utilize minimally invasive techniques. There are many reasons for this, a major one being the fact that carrying out an operation inside a patientâ€™s body with nothing to guide you but a grainy 2D image is profoundly difficult.

And, while there are technologies available that make the process simpler, such as the da Vinci surgical robot, the high cost of these systems and the specialist facilities they require hasnâ€™t lent itself well to their adoption.

Only 50% of Procedures are Minimally Invasive

It involves some of the finer surgical skills: tying knots, stitching, and making incisions deep inside a patientâ€™s body, such as in the abdomen, with no direct view of what is going on inside.

Since keyhole surgery entered the mainstream over four decades ago, a procedure that enables surgeons to access parts of the body without having to make large incisions, it has had a profound impact on post-procedure care and recovery for patients: reducing pain, speeding up recovery times, and mitigating the risk of serious infections.

Typically, trainee surgeons require anywhere between 60 to 80 hours practicing keyhole surgery before they are let loose on patients. However, in a mock-up operating theatre just outside of Cambridge, UK, a non-medic with only a few hoursâ€™ worth of experience is able to expertly stitch up a piece of square sponge with the assistance of Versius, the worldâ€™s smallest surgical robotâ€¦ and CMR Surgical claims that it will be coming to NHS hospitals very soon.

Developed in only five years, Versius is a modular system of robot arms that can be wheeled into an operating theatre when it is required before being used to perform a range of minimally invasive surgical procedures. A typical deployment of Versius would see three or more robots being used, with one arm holding up an imaging probe and the others equipped with surgical tools.

Versius is operated from a console, connected via a 1-gigabit Ethernet cable, where the surgeon uses controls reminiscent of those seen in gaming consoles alongside a 3D display to perform the surgical procedure.

One of the robotâ€™s biggest advantages over traditional techniques concerns hand-eye coordination. Traditionally, surgical techniques and instrument movements are counterintuitive. For example, a surgeon must move their hand to the right in order to move the tip of an instrument to the left. Versius cancels out these counterintuitive aspects, enabling surgeons to intuitively and comfortably move tools and instruments without having to consciously override instinct. 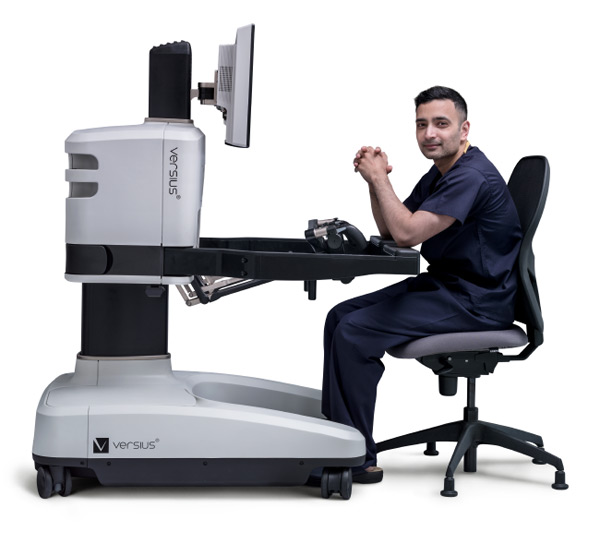 To achieve this, Versius has some very clever hardware and software engineering under the hood. As Fiona Haig, the companyâ€™s head of clinical engineering, explained, â€œThe secret sauce really lies in the wrist of [Versius]â€¦ It means that the robot holds the arm end-on, more like a surgeon would hold the instrument. If you look at traditional surgical or industrial robots they hold the instrument like a dagger.â€

It is this human-like wrist that has been key to delivering a system that is compact and portable enough to fit in operating theatres up and down the UK. Each robotic arm measures 38cm by 38cm and is roughly one and a half times the size of an average human arm.

Speaking of how CMR is using the very best in the cutting edge of robotic tech, Haig stressed that it is the companyâ€™s bespoke software, hardware, and electronic components that are at the heart of Versius,  â€œOur innovations have really sparked the imaginations of some of the development teams in our suppliers. Sometimes thereâ€™s the inevitable red tape of being a startupâ€¦.and trying to convince some cutting edge manufacturers to work with us on essentially nothing more than a prototype and a promise but once theyâ€™ve seen that potential theyâ€™ve engaged with us and theyâ€™ve come with us on that journey.â€

CMR has worked closely with the clinical community and hospital teams to ensure that the technology is compatible with the reality of being operational in an NHS hospital and the workflows of its teams.

Hospital layout has also been factored in, â€œThis canâ€™t be something that gets craned in, where we cordon off part of the hospital and it gets used for special occasions. This needs to be something everybody can use â€“ something you can wheel in when you need it.â€, Haig added. â€œWhen youâ€™ve got 400 people all with the same goal it really helps you cut through some of the politics. Everyone has one goal in mind, and that makes it much more straightforwardâ€.

Founded five years ago, CMR now employs almost 400 people and is doubling in size year-on-year. With clinical trials of Versius ongoing and over 30 successful procedures carried out using it, the first sale to an NHS hospital is imminent, according to the company.