How Does Tesla’s New Self-Driving AI Chip Match Up to Competitors?

How Does Tesla’s New Self-Driving AI Chip Match Up to Competitors? 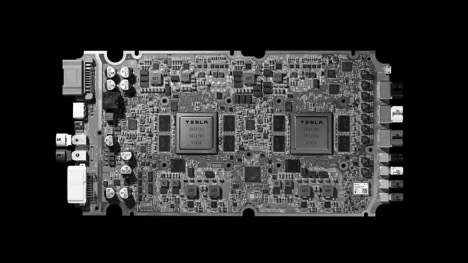 During its 'Autonomy Investor Day' event early March, Tesla announced that it had developed the “world's most advanced computer for autonomous driving”...

The corresponding chipset, Tesla claims, is at least seven times faster than that of any competitor, and â€œobjectively the best chip in the worldâ€. The company said it has already integrated the new chip in 425,000 vehicles with plans to put a million full self-driving (FSD) vehicles on the road by 2020.

But what sets Teslaâ€™s new chip apart from those of its biggest competitor? Is commercial autonomous vehicle (AV) production as early as next year truly possible?

All You Need to Know About Teslaâ€™s New Chipset

The new chip is known as Tesla Autopilot Hardware 3.0 (AP3). Itâ€™s a full self-driving (FSD) computer chipset custom-made for Tesla by Samsung. It holds an AEC Q100 certification from the Automotive Electronics Council and can be retrofitted in older Tesla models running at least Hardware 2.

According to Pete Bannon, lead chipset engineer, the AP3 will serve as the brain of future Tesla vehiclesâ€”processing input from 8 cameras, 12 ultrasonic sensors, radar, GPS, and mapping systems. The vehicle will use feedback relayed from the sensors to determine external driver conditions and steer the car on the road. 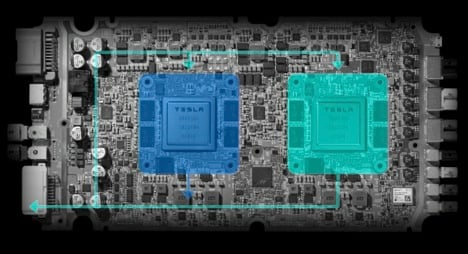 The chip consists of 3 core segments: video, computer, and power. The memory type is LPDDR4 random access memory (RAM) with a maximum bandwidth of 68 Gb/s. There's also an H.265 video encoder for the backup camera, dashboard camera, and sentry mode. The chip runs on less than 100 watts of power.

The main feature that sets the Hardware 3.0 apart from Nvidiaâ€™s chips is its redundancy. Having two independent processing units (with individual storage and power systems) on one board will keep the hardware running seamlessly in the event that one system fails.

Reviews from experts and competitors about the new chipset are a mixed bag: while experts praise the new chipâ€™s performance, Nvidia, Teslaâ€™s main competitor and former supplier, denies the Hardware 3â€™s superiority. 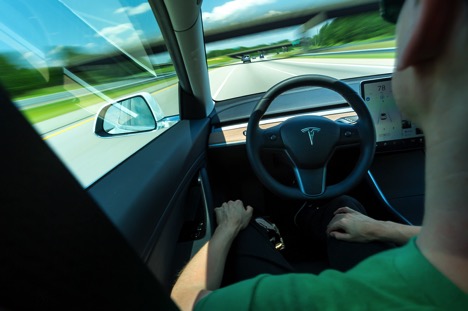 Nvidia says that the Xavier maxes out at 30 TOPS and not 21, as stated at the event, and argues that the comparison should have been made with its DRIVE AX Pegasus chip insteadâ€”which maxes out at 320 TOPSâ€”making it theoretically more powerful in terms of raw computing power.

However, experts think Nvidiaâ€™s position is invalidated on the basis of power consumption (the Pegasus requires 500W). Power consumption is an essential consideration for AV design which affects everything from efficiency to reliability and production costs.

Tesla and the Future of Autonomous Vehicles

In its drive to make autonomous vehicles a reality, Tesla is raising the bar for all other car makers. The companyâ€™s progress has been interesting to watch over the years, mostly due to the vision of its enigmatic CEO. Hardware 3.0 packs a punch with its superior processing power, full redundancy, and significant power savings and itâ€™s safe to say the company made good on its claims.

Following the announcement of the Hardware 3 technology, fully autonomous driving seems clearly on the horizon, but itâ€™s probably best to be cautiously optimistic: greater processing power does not fully address the current challenges of the industry, after all. Studies focused on the current challenges self-driving vehicles face show that regulatory approval and environmental regulations are some of the biggest obstacles that autonomous vehicles must overcome.