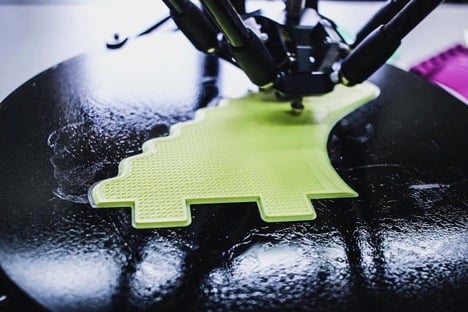 3D printing has been widely touted as a 'green' alternative to traditional manufacturing: first, because it generates little waste compared to conventional manufacturing techniques; and second, because it significantly eliminates the environmental costs of transportation, logistics, maintenance, and storage.

However, this revolutionary technology has failed to live up to the hype.

The energy required by a single 3D printer is already a concern, and so are the fumes produced and the excess plastic used in the printing process.

Plastic continues to be worrisome, especially because humans have an insatiable appetite for its boundless creations.

Plastic is flexible, lightweight, durable, and relatively inexpensive, which makes it a favourite for creating 3D printing filaments. Unfortunately, this nearly indestructible material is ending up in our natural environments and causing unprecedented damage to our food chain and our ecosystems.

The biggest concern is that plastic never goes away once introduced to an environment. Worse, it is virtually impossible for lifeforms to break it down, yet it is being ingested in high amounts by both marine and land animals.

Even humans have not been spared.

In a recent Europe-wide study, led by Dr. Philipp Schwabi, from the Medical University of Vienna, researchers discovered nine different types of plastic in every single stool sample tested. On average, there were 20 microplastic bits in every 10 grams of human waste.

Another recent study from Italy revealed that there were different levels of microplastics in 18 different industrial beverages, including Coca-Cola, Pepsi, Seven Up, Schweppes, and San Benedetto. 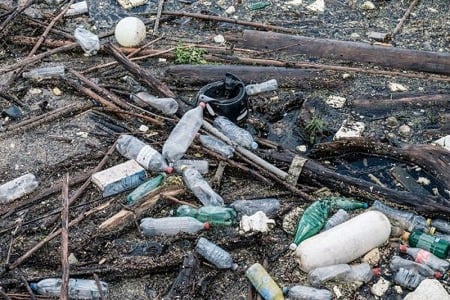 Both studies are a testimony that plastic use has become so pervasive that eliminating it from the food chain is almost impossible.

In fact, researchers from the University of Leicester believe that plastic pollution is so high that if this plastic were clingfilm, it would be enough to wrap our planetâ€”thatâ€™s what you get when you create 8.3 billion tons of plastic and toss it carelessly into the natural environment.

What About Bio-based Plastics Used in 3D Printing?

PLA (polylactic acid) has been championed as a renewable plastic that can function as fertiliser once itâ€™s broken down. This corn-based plastic seems like a better substitute for regular fossil-based plastic, but FP International maintains that PLA is not the answer.

This is largely because PLA will only break down in a compost facility where temperatures can be raised to around 60Â°C; but since such controlled environments are scarce, properly disposing PLA can become problematic.

According to Smithsonian, PLA will break down within three months in an industrial composting facility when it is heated to a specific temperatureâ€”140Â°Fâ€”and with a steady diet of microbes.

However, this bioplastic will take longer to decompose in a compost bin or landfill, places where it often ends up. In these uncontrolled environments, PLA fails to get enough oxygen for the degradation process and once it starts breaking down, it releases methane, a greenhouse gas more toxic than carbon dioxide. Analysts estimate that a PLA bottle will take somewhere from 100 to 1,000 years to decompose in a landfill environment.

So, in a nutshell, it is easy to talk about composting PLA, but in reality, this bioplastic is far from a panacea for the plastic problem.

Cutting Back on Plastics: What Are the Options of Going Green?

Conscientious makers should not sit and watch as our planet gets choked and dragged into the â€˜Age of Plasticâ€™. Especially not when they can make informed decisions about their plastic usage.

Already, the European Union has reached an agreement about the ban on single-use plastic products, and it is not only looking to introduce legislation that will ban some plastic products; the EU also wants plastic manufacturers to bear the cost of producing plastic, which includes waste management and cleanup costs. According to CNN Money, the European Commission estimates that the move will help eliminate a â‚¬22 billion cleanup cost.

To reach the proverbial promised land, the average DIYersâ€”who print small projects at homeâ€”should also jump on the bandwagon.

Forget about large-scale manufacturers who leave behind significant quantities of plastic by-products with their high-end industrial 3D printers; the focus is on the individual DIYer who prints fun projects on the garage table.

This small-scale maker must first be honest about where his/her 3D printing technique stands on the green scale before adopting ecologically friendly 3D printing methods.

3D printing is here to stay, and it should be able to clean up its act as it goes mainstream. Therefore, for the average creator, who owns a standard FDM printer and uses plastic filaments regularly, these options should set the ball rolling in the right direction in terms of addressing the over-reliance on plastics in 3D printing:

WillowFlex is an example of a filament that is compostable by EU standards. It is made from compostable raw-materials that have passed the EU (EN 13432) standards of compostability, with its main material being non-GMO corn starch.

The raw materials have been tested under the strict EU standards (EN 13432), and the tests have confirmed that the filament can be recycled in an industrial grade composting environment.

While WillowFlex gives makers the opportunity to create ecological objects that are non-harmful to nature, the filament hardly produces any smell or micro-particles. It is extruded by 3d-k.berlinâ€”and spooled by Mosaik-WFBâ€”based on 30 years of professional experience in both plastic production and extrusion.

According to the manufacturers, WillowFlex will break down in 2â€“3 years when disposed of in a standard composting environment like your backyard, but you must first shred the parts to fasten the anaerobic process.

You can also head over to 3DFilaPrint to assess their wide range of biodegradable filaments.

2. Invest in a Filament Recycler

The typical filament recycler collects plastic wasteâ€”like failed prints and extruders it into new filament, which can be re-used in a 3D printer.

ABS is a perfect example of a non-biodegradable plastic that can be recycled into new filament.

First, it is shredded into smaller pieces. Then, it is melted and extruded as a thin filament. The new filament can be coiled on a spool, but this is optional. So far, not many devices have both the shredding and extrusion capability installed, meaning you may be forced to purchase a shredder and an extruder separately.

One shredder that you may want to consider is SHR3D IT, which has both the capabilities of a shredder and a granulator. SHR3D IT was created by a group of young engineers in the Netherlands, and it has the capacity of processing as much as 5.1kg of material per hour. 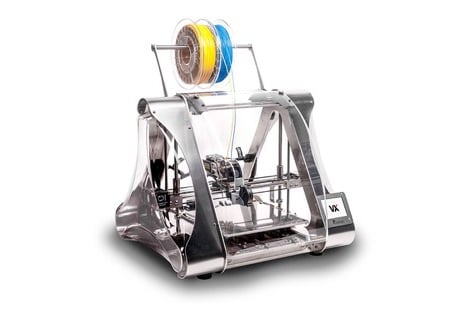 For extrusion, check out the following devices:

Or you could take things up a notch by creating a filament factory thanks to Precious Plastic, a Dutch project that is enlightening people about plastic recycling.

Precious Plastic has created various recycling machines that all work together to turn plastic waste into new filament. The founders are generous enough that they have made the blueprints and tutorialsâ€”for the appliancesâ€”freely available to the public.

Therefore, if you are motivated enough, you can make the machines yourself and turn your home workshop into a filament factory. Otherwise, purchasing ready-made devices is the easier option. They include an extruder, a shredder, a compressor, and an injection moulder.

You donâ€™t need to purchase new plastics when there is so much old plastic that can be re-used.

As 3D printing continues to evolve, it shouldnâ€™t be another reason to continue suffocating the planet beneath a blanket of plastic products. The devastating effects of climate change are already with us, and conscientious makers need to start keeping an eye on their plastic consumption to prevent the situation from worsening.

Most importantly, the decision to switch to green 3D printing should begin from the small-scale creators before it advances to the industrial manufacturerâ€”and this decision should lie somewhere between reducing, reusing, or recycling plastic filaments.