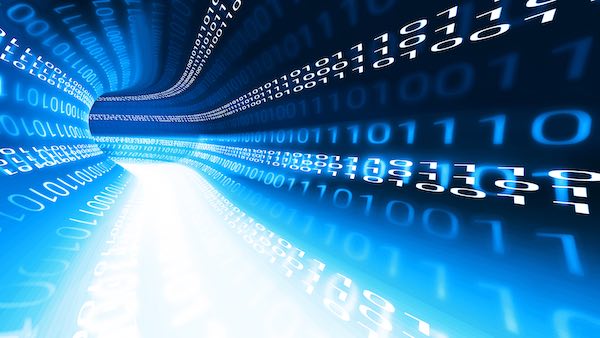 Researchers from Monash, Swinburne University of Technology (SUT), and Royal Melbourne Institute of Technology (RMIT) have achieved world-beating internet efficiency: their 44.2 terabits per second micro-comb chip has an optical technology that can replace the equivalent function of 80 lasers in traditional optic fibre-based internet solutions.

The researchers also maintain that the 44.2-Tbps micro-comb (a micro-comb being an optical frequency comb generated by integrated micro-cavity resonators) has the high-speed data processing required to download 1,000 high-definition films in a split second.

According to SUTâ€™s news page, the â€œtechnology has the capacity to [simultaneously] support the high-speed internet connections of 1.8 million households in Melbourne ... and billions across the world during peak periodsâ€.

The breakthrough comes when the demand for fast internet capabilities has become unprecedented due to the staggering number of web users now requiring their own consumer internet connections while respecting coronavirus lockdowns at home.

About the Optic Micro-Comb Chip Research

As touched on, the micro-comb chip is an optical technology: it uses infrared pulses of light as a means to channel internet communications. However, while there is nothing new about the internet data processing based on the transmission of light, the Australia-based researchersâ€™ micro-comb chip is nevertheless unique.

The device, which was provided by SUT at the time of the research, is not only more lightweight than traditional internet hardwareâ€”it is also able to achieve a multitude of communications channels, each of which acts as a high-quality infrared laser.

Such an achievement was established when the researchers set out to show how much potential optical micro-combs have in optimising communication systems. They did this by load testing the device to reflect the infrastructure of Australiaâ€™s National Broadband Network, aka NBN (the countryâ€™s future-proofing project that concerns the replacement of its outdated telecommunications systems with high-efficiency internet connectivity). 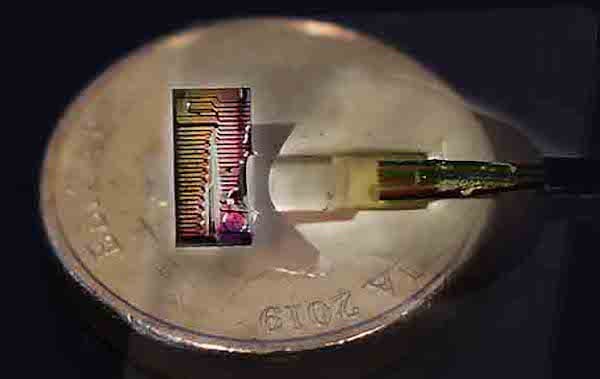 The optical micro-comb chip is about 3 mm by 5mm. Pictured: a close-up of the device, which sits on an Australian coin for scale. Image Credit: Swinburne University of Technology.

In what was the first time that a micro-comb has been used for such a grand, out-of-the-lab load test, the scientists set the stage for the research by installing 76.6 kilometres of â€˜darkâ€™ optical fibres. This optical fibre loop, funded by Australiaâ€™s Academic Research Network, is named â€˜the Australian Lightwave Infrastructure Research Testbedâ€™ (ALIRT). Illustrated below, ALIRT runs between RMITâ€™s Melbourne City Campus and Monash Universityâ€™s Clayton Campusâ€”and itâ€™s within that infrastructure that the micro-comb was integrated.

According to RMITâ€™s news page, the research demonstrated that the micro-comb solution successfully â€œcreates a rainbow of infrared light allowing data to be transmitted on many frequencies of light simultaneously, vastly increasing bandwidthâ€.

The report goes on to say that the result of the micro-combâ€™s multi-channel â€˜rainbowâ€™ achieved â€œabout three times the record data rate for the entire NBN network and about 100 times the speed of any single device currently used in Australian fibre networksâ€. (The specifics of how the optic data channels performed can be read in the researchersâ€™ Nature Communications publication.)

The test was carried out on a 76.6 km optical fibre loop between Royal Melbourne Institute of Technology, or RMIT; and Monash University, in Melbourne. Pictured: a red outline, superimposed on an aerial photograph, represents the Australian Lightwave Infrastructure Research Testbed optical fibre loop. Image Credit: RMIT.

The Applications and Implications of the Optic Micro-Comb

In the words of Professor Moss, director of the Optical Sciences Centre at Swinburne and co-inventor of micro-comb chips himself, this display of the â€œcapability [of] ultra-high bandwidth fibre optic telecommunications ... represents [both] a world record for bandwidth down a single optical fibre from a single chip source, and ... an enormous breakthroughâ€.

The Australia-based researchers believe that such a leap forward in telecommunications data processing could improve applicationsâ€”and not just the ever-increasing, data-hungry consumer applications either: many industry areas may benefit, too.

â€œItâ€™s not just Netflix weâ€™re talking about here: itâ€™s the broader scale of what we use our communication networks for. This data can be used for self-driving cars and future transportation, and it can help the medicine, education, finance, and e-commerce industriesâ€.

The scientists do not believe that future applications end there, moreover. â€œLong-term,â€ said RMITâ€™s distinguished professor Arnan Mitchell, â€œwe hope to create integrated photonic chips that could enable this sort of data rate to be achieved across existing optical fibre links with minimal costâ€.