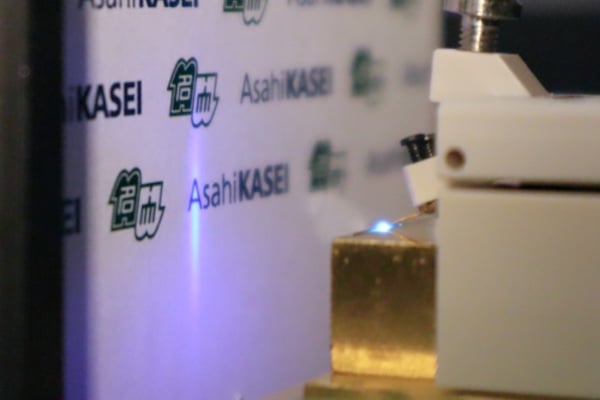 Researchers say that they have created a laser diode that emits the world’s shortest lasing wavelength of deep-ultraviolet light, with potential applications in disinfection, dermatology, and analyzing gases.

Scientists at Nagoya University, in cooperation with Asahi Kasei Corporation, say that they have successfully developed a laser diode that emits deep-ultraviolet light. This is according to their research which was published in Applied Physics Express.

This is a major improvement on previous developments in ultraviolet laser diodes where emissions have only been cut to around the 330nm mark. The team used the high-quality AlN substrate as their base for building up the layers of the laser diode.

This, they say, is necessary because lower quality AlN contains various defects that impact the efficiency of the laser diodeâ€™s active layer in converting electrical energy into light energy. In laser diodes, a p-type and n-type layer are separated by a quantum wall. When a current is passed through a laser diode, positively charged holes in the p-type layer and negatively charged electrons in the n-type layer flow towards the center and combine, releasing energy. 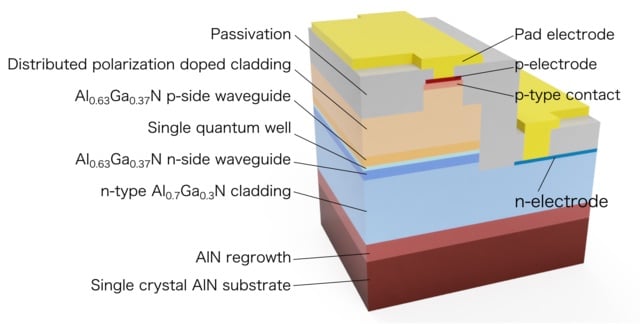 The quantum well has been designed so that it will emit deep UV light. The p- and n-type layers were made from aluminum gallium nitride (AlGaN), as are cladding layers which were placed on either side of the p- and n-type layers. Cladding below the n-type layer was doped with silicon impurities to modify the materialâ€™s properties, and the cladding above the p-type layer underwent distributed polarisation doping.

This dopes the layer without adding impurities. An aluminum gradient was engineered in the p-side cladding to enhance the flow of positively charged holes. Finally, a top contact layer made from p-type AlGaN doped with magnesium was added. Thanks to the polarisation doping of the p-side cladding, a pulsed electric current of only 13.8V was needed to produce the shortest wavelength reported so far of 271.8 nanometers.

UV-C Use in Medical Applications

The laser diode emits an ultraviolet light called UV-C in the wavelength region of 200 to 280nm. This means that it has potential for use in medical applications such as the treating of psoriasis, a skin condition, for disinfection of tools and instruments, and for analyzing DNA and gases, among other uses.