Various university researchers have come together to combine their knowledge and expertise to assess the current state of sodium-ion technology, presenting a comparison of the key performance indicators for sodium-ion and lithium-ion batteries.

As we all know, lithium-ion batteries (LIBs) are the energy storage technology of choice for a wide range of applications; however, there are also several other types of emerging battery technologies that are currently well on their way to share, and perhaps even overtake, their dominant position.

Among other technologies, such as redox flow, solid-state, and multivalent batteries, are sodium-ion batteries, or SIBs (also known by their chemical formula name: Na-ion batteries). SIBs hold great potential as a possible â€˜successorâ€™ to LIBs: theyâ€™re low-cost, environmentally-friendly, and have diverse key performance indicators to satisfy a myriad of different applications. 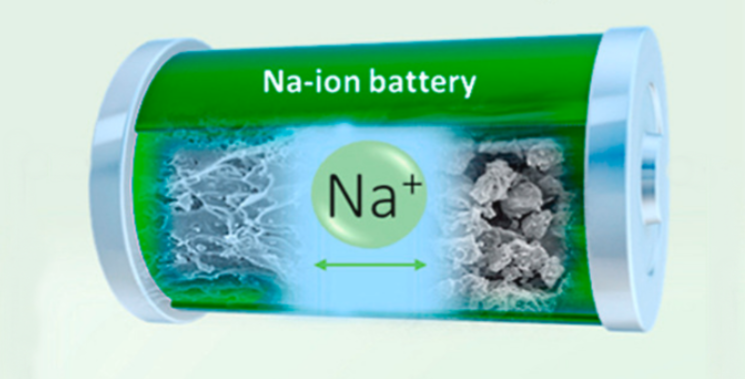 A graphic of a Na-ion (sodium-ion) battery. The middle of the graphic is superimposed with two microscopy photographs to represent the batteryâ€™s chemical makeup. Image Credit: the University of Warwick via ScienceDirect.

The Current State of Play of Sodium-ion Batteries

Despite their promise, Na-ion batteries are far from a perfect technology: researchers have faced, and continue to face, several notable challenges that are holding back progress: for example, the formation of salt crystals, which accumulate within the structure of SIBs and eventually ruin them.

Scientists and engineers the world over are keen to overcome these challenges so that the true potential of SIBs can be realised, and this means that there are a great many research studies and efforts currently ongoing. Even in spite of the COVID-19 pandemic, the sodium-ion battery market is expected to grow at a compound annual growth rate of 5%.

Now, in a bid to cut through all the noise being produced by what is a highly saturated area of research, a team of Na-ion technology expert scientists at the University of Warwick, England, together with colleagues from prominent institutions in Germany, France, Norway, and Spain, have come together to assess the current status of Na-ion technologyâ€”from materials to cell developmentâ€”offering what theyâ€™ve deemed a â€œrealistic comparison of key performance indicatorsâ€ for both SIBs and LIBs.

The researchers outlined their findings in their paper, â€˜Challenges of today for Na-based batteries of the future: from materials to cell metricsâ€™, published in the Journal of Power Sources on the 18th of September 2020.

In the paper, the Warwick experts analyse the prospect of SIBs assuming a dominant role in the energy storage market.

A collection of graphics used to represent various sodium-based battery chemistries. Pictured at the left of this image are some suggested applications of sodium-ion batteries, including the powering of electric vehicles. Image Credit: the University of Warwick.

A Core Part of the Research

The university scientists looked at electrode materials and electrolyte systems in Na-ion devices and extrapolated performance metrics and indicators, commenting that the development of positive electrode materials for SIBs has seen rapid growth due to insights gained from the various R&D into lithium-ion chemistries.

Layered oxides, polyanionic (from the word â€˜polyanionâ€™, meaning a molecule or chemical complex that has negative charges at several sites) compounds, and Prussian Blue analogues were said to be the most promising materials for positive electrodes by the researchers, in addition to titanium-based oxides, carbon, and alloying compounds for insertion-based negative electrodes.

Promise for the Future of Sodium-ion Batteries

According to the paper, it is stationary energy storage applications where Na-ion batteries may hold the most promise. Said Ivana Hasa, co-author of the research paper: â€œIn this field, sodium-ion batteries have the potential to dominate the future market, representing the most promising system to fill the gap between energy production and utilisation by securing energy supplyâ€. Hasa also identified high-power applications in electric vehicles as a potential niche application for SIBs.

With further development, the best materials currently available for Na-ion cells should enable sodium-ion researchers to approach the energy density of current Li-ion cells. This is great news for the energy storage systems market, where a successor to Li-ion technology is desperately needed to reduce costs and improve cycle life.

Dr Hasa, nevertheless, has noted that more work will be required to raise the high-voltage, capacity, lifetime, and efficiency performance of sodium-ion devices.