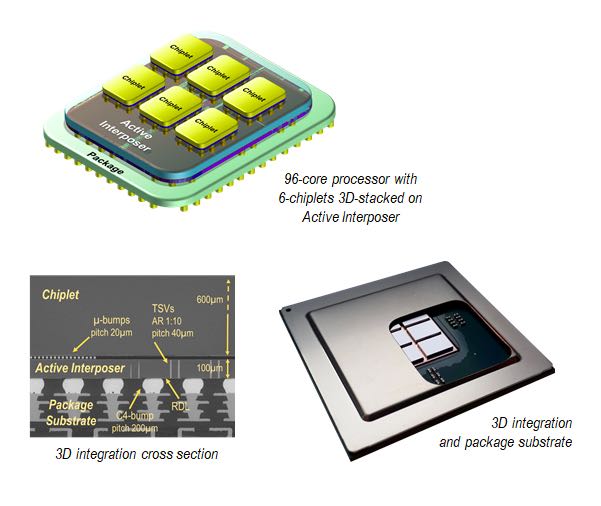 Although we are constantly seeing more innovation being made with system-on-chip (SoC) technologies â€“ a trend which has lasted decades and powers many of todayâ€™s most advanced computers â€“ the idea is beginning to be eroded by cost and complexity. As a result, we are now more commonly witnessing advanced processors come to market that consist of a collection of individual chiplets in a single package that are bound together by high-bandwidth connections. AMDâ€™s Zen 2 processor family is one example.

Now, French research organisation CEA-Leti, which has previously collaborated with leading semiconductor manufacturers such as STMicroelectronics, has shown us just how far chiplets can go by creating a 96-core processor made out of six of them. 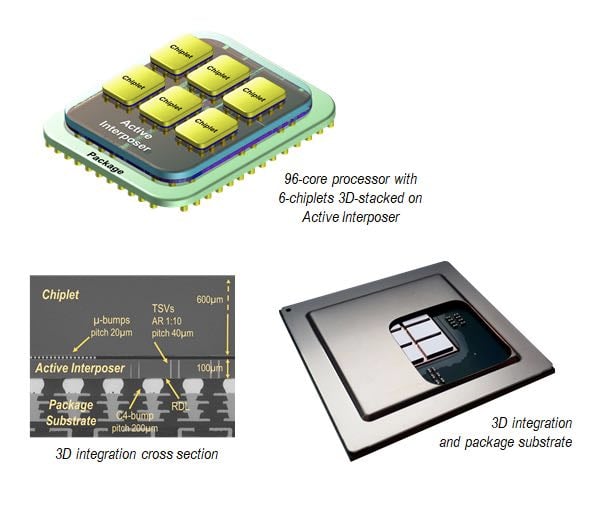 96 Cores Made from Six Chiplets

This active interposer technology overcomes limitations created by a lack of long-distance chiplet-to-chiplet communications and smooth integration of heterogenous chiplets by enabling integration of some active CMOS circuitry.

The interposer contains both voltage regulation circuits and a network that links the various parts of the coreâ€™s on-chip memories together. According to Pascal Vivet, a scientific director at CEA-Leti, active interposers are the best way forward for chiplet technology if it is ever to allow for multiple chiplet vendors to be integrated into systems.

The interposer, which features a network-on-chip, uses three different communication circuits that link the coreâ€™s on-chip SRAM memory. L1 and L2 caches, which are the fastest-access memories, are linked directly with no additional circuitry. The next-highest level of cache connections, L2 to L3, require additional networking built into the interposer, as does the link between L3 and off-chip memory.

Overall, the 96-chip system can achieve 3 terabytes per second per mm2 of silicon with a latency of only 0.6 nanoseconds per millimetre.

Many are hopeful that chiplet technology like that of CEAâ€™s could reimagine the SoC industry, paving the way for chiplets from multiple vendors all with the ability to be easily integrated with little effort on standardized interfaces.

Although this result would mean cheaper, more powerful, more flexible systems that can be mixed and matched to individual specifications, we are not there yet.

The Adoption of Chiplet-Based Ecosystems

Unlike CEA-Letiâ€™s prototype system, commercial systems that rely on chiplets use silicon interposers. These have no active embedded circuitry and many instead rely on organic circuit-board material as opposed to silicon. These require a large amount of codesign between the chiplets and the integrating package.

Still, Vivet is hopeful that active interposer technology similar to that unveiled in CEA-Letiâ€™s research will be an enabler of integrated heterogeneous functions. He added that chiplet-based ecosystems would now be rolled out rapidly in the high-performance computing sector and others such as automotive.