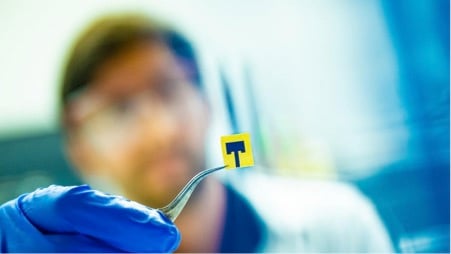 Antennas made of carbon nanotube (CNT) films would be as efficient and more robust than common copper antennas, according to new research by Rice University's Brown School of Engineering.

It was supported by the Air Force Office of Scientific Research, the Department of Defense, and a National Defense Science and Engineering graduate fellowship.

As Efficient As Metal?

In the study conducted in the laboratory of Matteo Pasquali, leading author Bengio details how, at the target frequencies of 5, 10 and 14 gigahertz, the antennas performed as well as their metal counterparts. This, he explains, would disprove the general theory from other researchers that nanotube-based antennas and their inherent properties could not adhere to the "classical relationship between radiation efficiency and frequency".

â€œThis is why I chose three frequencies above the Wi-Fi band, closer to what will be the 5G bands, in order to see if this trend extended into that range, and we were satisfied to see it did,â€ Bengio tells Electronics Point.

By doing so, the experiments proved that one-to-one comparison is indeed possible.

â€œBased on related work on CNT fibres,â€ Pasquali tells Electronics Point, â€œwe knew that we could make CNT materials that are more conductive than earlier literature work. We were working on coaxial cables, in collaboration with Nate Orloff, who was a postdoc jointly advised by me and NIST colleagues, and is now at NIST in Boulder.â€

Bengio and his team made the films by dissolving single-walled and up to 8 microns long nanotubes in an acid-based solution. The researchers then spread the solution onto a surface and noticed how the nanotubes self-aligned, a conclusion reached by Pasqualiâ€™s team in the past two decades.

â€œOur group had been working on solution-processing of CNTs since the early 2000s,â€ Pasquali says, â€œinitially in collaboration with our late colleague Richard Smalley. In a number of publications over time, we had demonstrated that acids are good solvents and had explained how CNTs behave in these solvents and how they could be processed.â€ 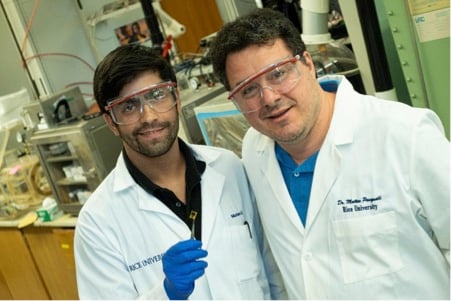 While gas-phase deposition is a process usually employed for trace deposition of metals, Bengio adds, the fluid-phase processing method would be suitable for more scalable, continuous antenna manufacturing.

This is because nanotubes are naturally held together by powerfully attractive van der Waals forces, which provide the CNT films with improved mechanical properties when compared with copper.

In terms of applications, Bengio explains, 5G antennas came out as a natural by-product of the research. â€œWe were led to naturally [to them] by the results from the first study on CNT monopole antennas using CNT fibre.â€

The technology could also have other applications. â€œThe mechanical toughness and chemical inertness of this material make it an ideal candidate for replacing antennas in a variety of challenging environments, including downhole in oil wells or antennas on oil rigs exposed to saltwaterâ€, Bengio says. â€œCopper antennas must be encased in all kinds of protecting elements, and in our case, that would not be necessary (or at least, much less so).â€

When asked whether CNT fibres will replace metals altogether, Bengio answers that most likely that wonâ€™t happen any soon.

â€œCost is still a big hurdle,â€ he explains, â€œso the applications that we must focus on are the ones where the antenna's cost of failure is high and where we can leverage the value propositions of this material as optimally as possible.â€ 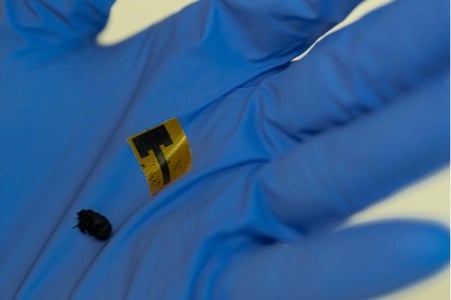 The researcher believes that while the results at higher frequencies are very promising, it is still a technology in experimental stages.

However, he also warns that companies and researchers around the world should keep in mind that there is far more carbon on Earth than there is copper.

â€œCost of producing CNTs from carbonaceous sources could eventually become low enough, comparatively, to justify adopting these antennas in a wider range of applications, but I believe that is still at least 10 years away.â€

In order to further develop the material, Bengio has recently founded a company called Wootz, LLC, based in Houston TX.

â€œIn addition to the homage to cool materials science history, (the name is a tribute to wootz steel, originally called wukku by the Indians, who discovered over a millennium before the Arabs did that a higher carbon content alloy produced a steel ingot with superior properties), I hope to see wootz steel serve as a metaphor for what we are trying to do: substitute just a bit of carbon-based tech into an industry primarily dominated by metals in order to make something better.â€