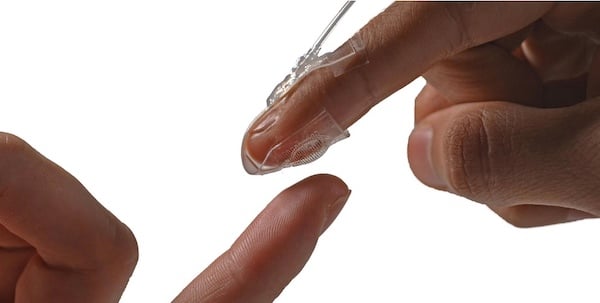 The EPFL's (Ecole polytechnique fédérale de Lausanne) Reconfigurable Robotics Lab and the Laboratory for Soft Bioelectronic Interfaces have partnered to create silicone and electrode-based artificial skin, which could be used to aid rehabilitation and enhance VR applications.

The artificial skin is flexible and soft and can conform to the shape of a wearerâ€™s wrist and hand, providing haptic feedback in the form of pressure and vibration. It is also equipped with strain sensors responsible for measuring the skin's deformation. This is to adjust haptic feedback in real time, thus producing an almost realistic sense of touch.

The technology behind the new synthetic skin contains soft pneumatic actuators (SPA) that form a membrane layer that can be inflated by pumping air into it at different pressures and frequencies (up to 100Hz, equalling 100 impulses per second). 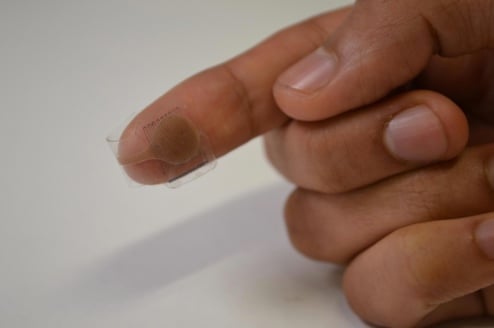 A close-up shot of the artificial skin adapting to a wearer's finger. Image Credit: EPFL.

In other words, the skinâ€™s haptics vibrate as the membrane layer is rapidly inflated and then deflated. On top of the membrane, there is a sensor layer that contains soft electrodes composed of a liquid-solid gallium mixture. This measures the skin's deformation continuously and then sends the resultant data to a microcontroller. This, in turn, uses the received feedback to fine-tune the sensation transmitted to the wearer in response to their movements (as well as changes in external factors).

â€œThis is the first time we have developed an entirely soft artificial skin where both sensors and actuators are integrated,â€ Harshal Sonar, the study's lead author, said. This gives us closed-loop control, which means we can accurately and reliably modulate the vibratory stimulation felt by the user. This is ideal for wearable applications, such as for testing a patient's proprioception in medical applications.â€

Aside from the above, the artificial skin is also highly flexible and can be stretched up to 4 times its original length, and for up to a million cycles. Because of this, the potential real-world applications could be several in number, ranging from various medical scenarios to VR.

The scientists have so far tested the new technology on users' fingers only: accordingly, they said that some improvements are still going to be implemented before the new research can be brought to market.

â€œThe next step will be to develop a fully-wearable prototype for applications in rehabilitation and virtual and augmented reality,â€Sonar said. â€œThe prototype will also be tested in neuroscientific studies, where it can be used to stimulate the human body while researchers study dynamic brain activity in magnetic resonance experiments.â€

The EPFL's Reconfigurable Robotics Lab and the Laboratory for Soft Bioelectronic Interfaces are both part of the NCCR (National Centre of Competence in Research) Robotics program.