Scotland’s European Marine Energy Centre in Orkney has announced its plans to produce continuous green hydrogen from tidal power as part of a new flow battery installation. The project will involve vanadium flow batteries to ensure the energy storage system has high efficiency and endurance.

Variable renewable energy sources, such as tidal, wind, and solar, have difficulty in providing the consistent power demanded by industrial processes. This is because such sources have lots of inherent variabilities: the tides are not always rough, winds donâ€™t always blow, and the skies arenâ€™t always clear. To solve this problem, scientists are trying to develop suitable energy systems that can store power generated by renewables and release it when itâ€™s needed.

Now, in what has been described as a â€˜world firstâ€™, storage battery manufacturer Invinity Energy Systems will deliver a 1.8-MWh (megawatt-hour) vanadium flow battery (VFB) at Scotlandâ€™s Orkney-based European Marine Energy Centre (EMEC) tidal energy test site, located on Eday (an island in the Orkney Isles). These batteries are capable of storing and discharging industrial levels of power over the course of multiple cycles per day while bearing minimal degradation. On top of this, they have an estimated lifespan of 25 years or more.

Combined, the tidal power and flow batteries will be used to power EMECâ€™s hydrogen production plant, and this will enable the continuous production of green hydrogen from variable renewable energy sources. â€œThis is the first time that a flow battery will have been coupled with tidal energy and hydrogen production, and will support the development of the innovative energy storage solution being developed in the Interreg North-West Europe ITEG [Integrating Tidal Energy into the European Grid] project,â€ said Neil Kermode, managing director at EMEC in Scotland.

Flow Batteries Are the Best Fit for the Energy System

After an extensive technical review into how the efficiencies of the electrolyser could be improved, it was decided that a flow battery energy storage system would prove the best fit for the energy system. This is because flow batteries store electrical charge in a liquid and can provide industrial quantities of power for a sustained period. 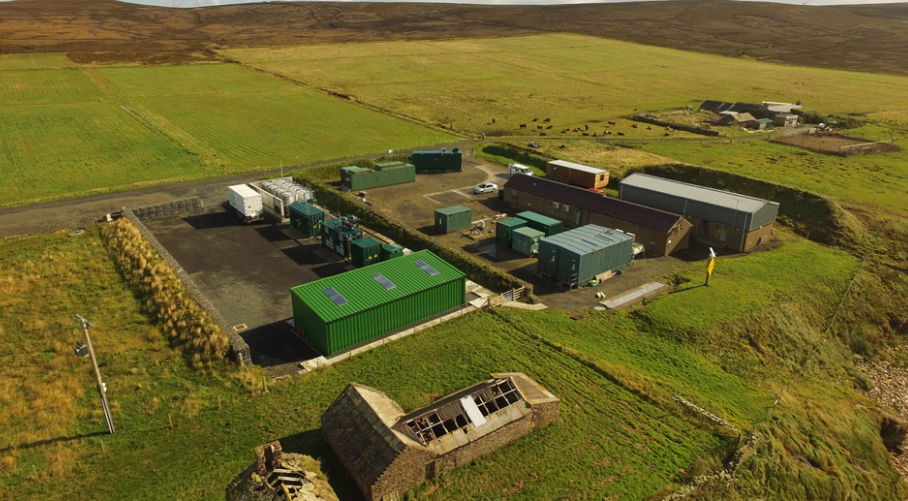 Such batteries are also capable of achieving deep discharges without undergoing damage, and they can also remain fully charged for prolonged periods without losing change. â€œThese are all necessary qualities to integrate battery technology with the renewable power generation and hydrogen production process,â€ Kermode says.

The â€˜Perfect Partnerâ€™ for Tidal Energy

Invinity Energy Systemsâ€™ battery system is made up of two separate tanks of vanadium electrolyte with different charges. Both of these tanks are connected to a central fuel cell stack. The electrolyte is then pumped through this central stack where ion exchange occurs across a membrane. When this exchange takes place, thereâ€™s a reversible electrochemical reaction which allows electrical energy to be stored and discharged when needed.

The system relies on the ability of vanadium to exist in four different oxidation states (V2+, V3+, V4+, and V5+). Each of these states holds a different electrical charge. Despite the different states, the same chemical element is used for both the positive and negative sides of the battery, meaning that the contamination and degradation problems seen in other batteries can be avoided.