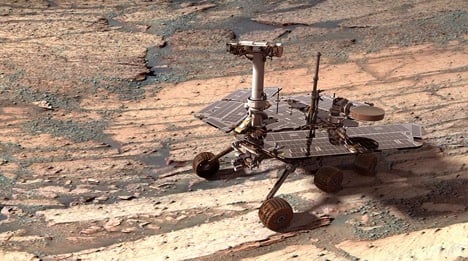 Demonstrating the influence that the natural world has on engineering developments, the University of Warwick’s recent project—a wind harvesting device that apes the highly-shakeable nature of an aspen leaf—may enhance the ways we power Mars rovers.

The shake-at-the-slightest-breeze nature of Aspen Leaves has, until recently, remained largely unknown, so unsurprisingly, it has long piqued the interests of engineers, particularly the University of Warwick’s (UW) researchers, Sam Tucker Harvey (the study’s lead author and engineering PhD), Dr. Igor Khovanov, and Dr. Petr Denissenko. Having annually tasked undergraduates with learning the mysteries of the phenomenon, the three scientists have recently taken it upon themselves to analyse the matter; and in March 2019, they published their findings in Applied Physics Letters.

Accordingly, let’s look at the design innovation behind UW’s research, before ultimately exploring why the breakthrough could one day power Mars rovers.

Again, it’s nature’s intention for aspen leaves to tremble at the slightest breeze; this is because their frequently movements keep their photoreceptors (such as chlorophyll), from being damaged by unprocessable levels of sunlight during photosynthesis.

Structurally, such a defence mechanism is made possible by the unique, uniform flatness of each aspen leaf’s petiole—i.e. the stalk joining the leaf to its stem. This means that there is none of the comparative inflexibility of normal plant leaf stalks, whose curved and tapered form render them more unshakeable: namely, able to bend their leaves only in the direction of the wind, contrary to the aspen leaf’s unique response of quivering indiscriminately.

While the former quality does itself inform structural mechanics, it’s the latter quality, particularly its kinetic energy implications and overall resilience, that lends itself to electrical and power engineering—and again, even aerospace. 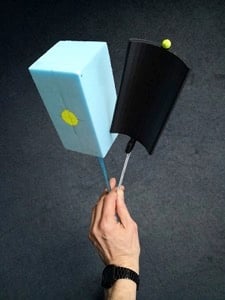 The aspen leaf-inspired wind energy harvesting device (right) held next to its traditional counterpart (left). Image courtesy of the University of Warwick.

Translating the Natural Design to a Manmade One

The question now arises: ‘How does nature’s aspen leaf and its properties translate to a manmade design?’ Another advantage of the UW researchers’ plant life inspiration and model is the fact that it faces the flow of wind by way of the leaf blade being perpendicular to its petiole (see bottom image).

Alongside modelling such a perpendicular approach to windflow, the UW engineers also, following mathematical modelling of the plant, attempted to imitate the leaf’s unique anatomy by substituting its flat petiole with a narrow cantilever beam, and its leaf with a curved blade tip that has a circular cross-section.

The result is a device that is more comparable to an aerofoil (consider the shape and behaviour of a propeller, to name one example) than traditional energy harvesting devices, which sport a cuboid—and therefore less aerodynamic—shape. The above photo shows the former (right) beside the latter (left).

To elaborate on the said aerofoil design, particularly in relation to the aspen leaf-style EHD’s curvature shown in the above photo, it is formed of a top curve (upper camber) that is more pronounced than its bottom counterpart (lower camber).

This is to ensure that, upon reaching the bottom of the aerofoil (trailing edge), there is a slowed windflow directed into a comparatively fast windflow. Due to Newton’s third law (that every action has an equal and opposite reaction), the latter force is therefore made to push against the former force to provide lift and propulsion.

A diagram that shows the formation of an aerofoil. Note that the upper camber (convex curvature) is larger than the lower camber for aerodynamics. Image courtesy of Wikimedia Commons.

Having tested the device in a wind tunnel, in and of itself, the end result of an aspen leaf-inspired wind EHD is a small, but ultimately significant one.

“The amount of available energy”, says Dr Petr Denissenko, “[sees] a typical value for palm-sized devices at the level of less than a milliwatt”. But nevertheless, the EHD has already achieved “self-sustained oscillations at uncharacteristically low wind speeds”, to quote the UW’s Applied Physics Letter Abstract.

“The next nuance”, continues Denissenko, “[concerns] what part of the mechanical power we can convert to electricity”.

This calls for mechanical and electronics engineers alike to scale up the Aspen EHD, which will be a long, but of course worthwhile, process. For one thing, Sam Tucker and his peers already seem confident that future wind EHDs will be blade-shaped for the practical aerodynamics already discussed.

But perhaps the most revolutionary advantage to the Aspen EHD is in its resilience: the responsive electromechanics mean that the technology does not even need bearings for the blade to generate power. This accommodates the EHD’s use in harsh environments, including extreme temperatures, dust, and sand, which will altogether not affect the device’s functionality.

In fact, this is why the UW engineers consider their aspen leaf (see below photo) EHD prototype the solution to the fact that Mars’s rigorous conditions can break existing (solar) EHD technology in NASA’s Mars rovers, such as the now-defunct ‘Opportunity’. 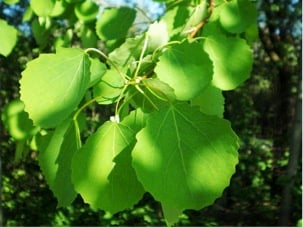 A pile of aspen leaves (the species being Populas tremula): note their flat stalks, which are perpendicular to the leaf blades for optimal wind responsiveness. Image courtesy of Hugo.arg via Wikimedia Commons.

“[Even] the Mars rover Opportunity’s solar panels were probably eventually overcome by a planetary-scale dust storm. If we could equip future rovers with a backup mechanical energy harvester based on [our] technology, it may further the lives of the next generation of Mars rovers and landers.”

Moreover, despite what is currently the limited amount of electrical power that can be generated from the leaf-inspired EHD, one technology that is well set to one day be replaced by UW’s breakthrough are wireless sensor networks (WSNs).

While WSNs have very low power requirements, in many cases, they still have very high demands when it comes to the resilience of their hosting devices. So when you consider the need for automated, extreme weather sensing (whether it's on Mars or Earth), the EHD’s modest efficiency, yet robust “low wind but large amplitude quiver” functionality, both point to just how groundbreaking the technology is destined to be. All in all, perhaps competing energy devices should be ‘shaking like a leaf’!