Siemens' PAVE360 program is designed to speed up the development and evaluation of autonomous vehicles. This new platform allows developers to test autonomous vehicle systems and other electronic components in an entirely virtual environment.

Unlike other platforms, PAVE360 performs simulations by combining real-world scenarios and virtual models of cameras, LiDAR, processors, and other vehicle components. It does this by transmitting virtual data from a vehicleâ€™s sensors to its silicon, ultimately enabling the testing of car components under numerous conditions (e.g. rain, snow, daylight, darkness, specific moving obstacles, etc.).

â€œPAVE360 was envisioned over three years ago, prior to the acquisition of Mentor Graphics by Siemens,â€ David Fritz, global technology manager at Siemens, told Electronics Point. â€œOur R&D teams started critical work on what is now PAVE360 around that time. They had the advantage of using existing, mature technology already developed at Mentor, including Veloce Strato and its apps, which were announced in February 2017 with critical new features that enabled the overall PAVE360 solution.â€

PAVE360 is the largest collaborative result to date of approximately $12 billion of acquisitions made by Siemens over the past decade. For instance, the platform was created using a series of products developed by Mentor, a US-based electronics design group acquired by Siemens in 2017. The most noteworthy are Capital System Architect, Volcano, and Catapult HLSâ€”a tool that enables the development and modelling of custom hardware IP, including efficient neural networks.

â€œShortly after the acquisition of Mentor by Siemens was announced, it became clear that it was a masterstroke because Siemens brought with it the very pieces we needed to round out the PAVE360 solution,â€ Fritz explained. â€œFor high-realism sensor modelling, Siemens brought Simcenter Prescan, a mature and full-featured product. Siemens also brought Simcenter AMEsim for modelling mechatronic systems like braking, steering and transmissions, another mature product with a large library of physics-based models for automotive and other domains.â€

The development of PAVE360 was finalised with the subsequent acquisitions of Sarokal, a company that designs tools to model V2X communication; and Austemper, a startup specialised in analysis, auto-correction and simulation technology for functional safety. 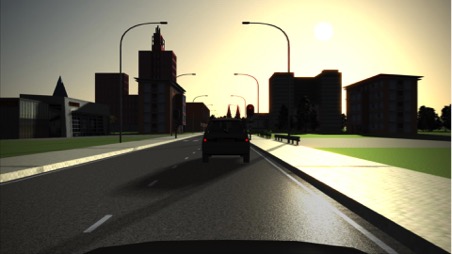 From its early days of development, PAVE360 was meant to support high-fidelity closed-loop modelling of multiple autonomous vehicle components, ranging from systems on chip (SoC) to the complete system of systems.

â€œWe call this a digital twin simulation,â€ Fritz explained. â€œWith this level of modelling, an OEM or supplier can confidently develop their portion of the vehicle platform, whether it's hardware or software, and validate it in the context of the entire vehicle and the environment within which it operates. We think of this a â€˜chip to cityâ€™ solution.â€

Essentially, PAVE360 allows developers to test physical vehicles that do not yet exist, as well as their individual components, under a variety of environmental conditions. The platform also allows chip designs to be democratised, encouraging greater collaboration between automakers, chipmakers, suppliers, software houses and other vendors.

Initial tests and evaluations carried out by researchers at Siemens have yielded highly promising results, with PAVE360â€™s performance exceeding their expectations.

â€œPAVE360â€™s performance continues to improve,â€ Fritz said. â€œEarly work on sensor and actuator correlation with their physical counterparts produced excellent results while power and performance correlation at the SoC level has shown to correlate to within 5% of actual silicon. Work is underway to show a high correlation of complete electronic control units as well as the entire vehicle.â€

A Game Changer in Digital Simulation

According to Fritz, no other simulation tool on the market approaches the depth and breadth of PAVE360â€™s capabilities. Siemensâ€™ platform brings digital twin simulation to the next level, as it can be used to test hardware and software sub-systems as well as full vehicle models. Moreover, it supports the fusion of sensor data and enables the simulation of traffic flows both in existing cities and smart cities, in which self-driving cars will most likely be travelling.

â€œThe ability to have a high-fidelity digital twin of a vehicle implemented in PAVE360 gives high confidence that it performs very closely to the physical vehicle platform, and therefore can be used to test corner case scenarios not possible with on-road testing,â€ Fritz added, â€œIt also allows for automated driving scenario closure, dramatically reduces the need for hardware in the loop testing of platform configurations, and allows for extensive regression testing before distributing over the air updates.â€

For more information on PAVE360, visit Siemens' Newsroom page. Plus, you can read more about intelligent automotive solutions in our opinion piece about the EU's Intelligent Speed Assistance initiative.