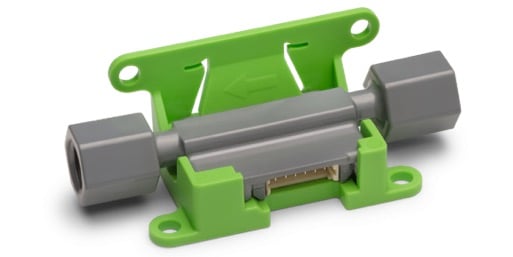 Released worldwide in June 2019, the SLF3x series builds on more than two decades of expertise from the Zurich-headquartered company.

Liquid flow rate meters are vital to the operation of many industries, and Sensirionâ€™s latest offering is based on its CMOSensTechnology, with optimised costs brought about by simplifying the design, while retaining the full range of fluidic, electrical, and mechanical connections. 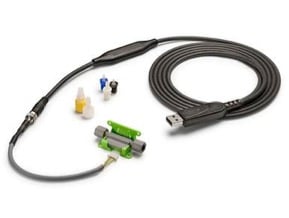 The SLF3x supports a wide range of connections. Image courtesy of Sensirion.

The range is designed to cater for exceptionally low flow rates, such as those used or found in diagnostics, analytical instruments, and life sciences. The sensor allows for the bidirectional measurement of flow rates up to 40ml per minute for hydrocarbon-based fluids, as well as water.

Traditional methods of measuring flow rate often rely on moving mechanical parts such as spring and piston, turbines, or paddlewheels, However, these can have the effect of introducing turbulence into the fluid, and their presence in the stream can alter the rate of the flow rate of the fluid passing through them

Sensiron avoids these problems by having no moving parts in the SLF3x, and nothing which could impede the movement of liquid. The flow channel itself is made from inert, wetted materials which provide outstanding chemical resistance and excellent media compatibility.

Flow rate sensors are used in a wide variety of industries and have a multitude of uses.

High-performance liquid chromatography is a method used to separate, identify, and quantify compounds, allowing for the separation and analysis of small particles quickly and effectively. It relies on an analysis of the relationship between particle size and flow rate. As exceptional low flow rates are expected, the SLF3x series is ideally suited to this application.

Flow rate sensors are vital in hospital settings, where doctors need to be able to know the exact volume of fluids which are being administered to a patient. These can include anaesthetics, where a precise balance is required to balance the requirements of keeping the patient sedated, while not endangering their life. Saline drips traditionally use less advanced flow meters or restrictors to keep patients hydrated.

Fuel cell systems convert the energy from a chemical reaction directly into electricity and heat. They rely on a large number of components including pumps, condensers, reformers, and desulphurisers. To achieve efficient operation without generating excess heat or unwanted by-products, flow sensors such as the SLF3x can be used to precisely monitor the rate at which fluids are circulating in and being used by the system.

Replacing humans with automated systems has the potential for increasing efficiency in most industrial and factory settings. But, even in the most automated setting, people are often still used for monitoring and ensuring that systems are operating as they should.  The SLF3x sensors can monitor the entire system operation and detect common failure modes.

Sensirion was founded in 1998 as a spin-off from Swiss Federal Institute of Technology, and now has offices in South Korea, Japan, China, Taiwan, Germany, and the United States, developing environmental sensors for measurement of humidity and temperature, volatile organic compounds, carbon dioxide, and particulate matter.