How do you achieve the best of both worlds when it comes to engineering training: teaching engineers how to design and manufacture as realistically as possible—without the risk of causing any kind of damages? Many will know the answer already: you train them through VR simulations; but the issue is that traditional VR starts and ends at the audio-visual user experience...

At 2:49 AM Eastern Time, the Crew Dragon soared up into space and deployed into orbit at 3:00 AM, a mere 11 minutes later. The Falcon 9 then returned and landed on one of SpaceX's ships placed in the Atlantic.

The Rebirth of American Space Travel?

This flawless launch has certainly raised the hopes for U.S. space travel, particularly since it is something that has remained dormant since the retirement of NASA's space shuttle fleet in mid-2011. According to NASA's Jim Bridenstine, it signified "a new era in American excellence, getting us closer to once again flying American astronauts on American rockets from American soil".

The Crew Dragon Launch formed a crucial part of NASA's Commercial Crew Programme which relies on the use of private spacecraft to ferry astronauts to and from the ISS.

Before NASA will place astronauts on SpaceX's (and Boeing's) spacecraft, it wants to see them in action. 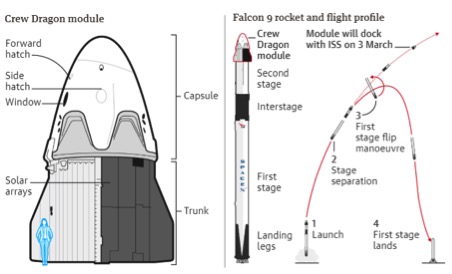 Bridenstine spoke further at a post-launch press conference, paying tribute to the agreements between the U.S. and others that help to keep the U.S. in outer space for almost a decade since NASA's retirement of the space shuttle fleet.

â€œBut I think another big milestone here is the idea that weâ€™re not, as an agency, as NASA, weâ€™re not purchasing, owning and operating our own rockets at this point. Weâ€™re looking to a future where we can be a customer, one customer of many customers in a very robust commercial marketplace in lower Earth orbit.â€

The most noteworthy part of the Crew Dragon mission was how it autonomously docked with the ISS.

On its approach, the nosecone of the Crew Dragon opened up to reveal its docking port and forward-facing Draco thrusters. Gradually, a series of burns took place that matched the Crew Dragonâ€™s orbit with the ISS, enabling the Crew Dragon to dock itself with the ISS without utilising its robotic arm like the Dragon 1 had previously.

These provided the ideal, rapid short-time firings needed for the Crew Dragon to match the ISS.

As a key partner of NASA in their Commercial Crew Programme, this launch of the SpaceX Crew Dragon was hailed as an important "dress rehearsal".

While this launch did not carry human life, it did carry a dummy named Ripley. Ripley is equipped with a custom SpaceX suit and lots of sensors, the point of which was to collect data about how future launches might affect the humans riding along.

It is this data and any findings that NASA will be paying close attention to. Ultimately, however, it is not a make-or-break situationâ€”SpaceX's Demo-2 mission will launch later this year and be the first Crew Dragon mission to carry human life, NASA astronauts Robert (Bob) Behnken and Douglas Hurley.

Around 27 hours post-launch from the KSC, the SpaceX Crew Dragon met up with the ISS and attached itself to the international docking adapter at 5:51 AM Eastern Time on Sunday, March 3rd, gently sailing 402 kilometres slightly north of New Zealand above the Pacific Ocean.

It then returned to earth loaded with 150 kilograms of cargo following its successful 6-day mission, splashing down in the Atlantic Ocean at 8:45 AM Eastern Time on March 8th, six hours after undocking from the ISS at 2:32 AM Eastern Time.

It was met by SpaceX recovery ship, the Go Searcher, and loaded aboard by 9:45 AM Eastern Time before beginning its 30-hour return trip to Florida by sea.

It is difficult to ignore the significance of SpaceXâ€™s Crew Dragon launch.

If SpaceXâ€™s first manned mission is a success later this year, it will open the doors to endless opportunityâ€”SpaceX is not restricted by budgets in the same way government-funded agencies are and the technology at its disposal is constantly changing and improving, for instance.

Indeed, SpaceXâ€™s efforts will create ample opportunity throughout the world not just for astronauts and space travel, but for the individuals who design and build the crafts, too. It is a virtual certainty that with this recent success, it wonâ€™t be long before we start seeing a lot more money being funnelled into space travel, new craft designs, and more brazen missions.

For more information on SpaceX, have a look at EP's Opinion piece: 'What Powers the Falcon 9 Reusable Rocket? A Peek Into Its Control and Electrical Systems'.