Tesla’s Powerpacks Are a Breakthrough in Power Storage Technology

Tesla’s Powerpacks Are a Breakthrough in Power Storage Technology 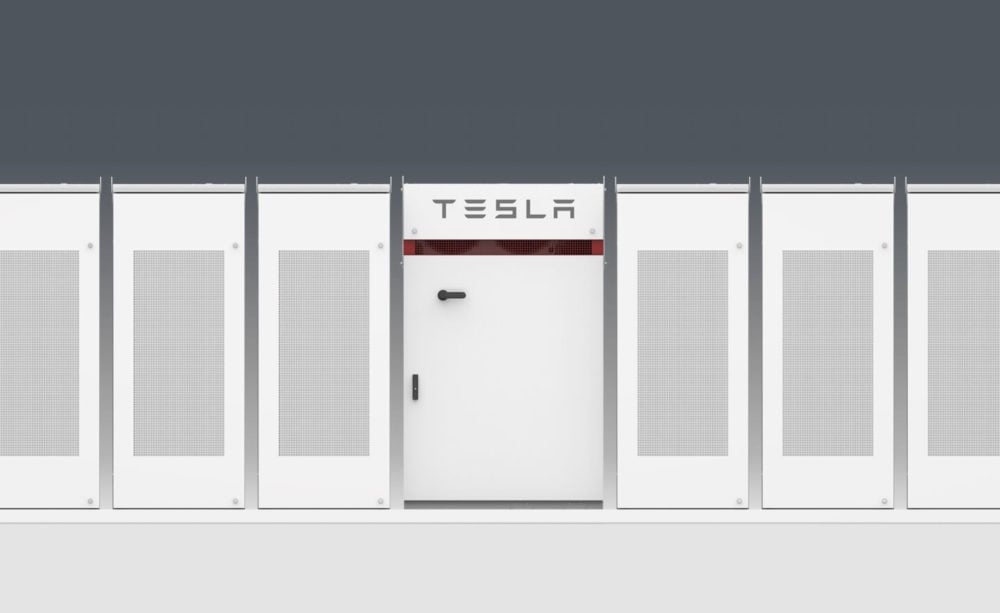 Tesla launched their Powerpacks just two years ago, and many skeptics have voiced their opinions on the supposed newfound solution to power storage for cities. But in spite of this opposition, these pieces of technology more than live up to the hype from 2016.

World-celebrated tech tycoon and philanthropist Bill Gates once profoundly noted that his technological brainchild, Microsoft, was a product of looking ahead to predict where the world was headed, years from the present, and going there to wait for it to catch up.

A close look at the present energy landscape will reveal that a similar big break awaits any company able to produce a system that efficiently harmonises generations of vast amounts of alternative energy, storing it, and making that stored energy available for on-demand use on a large scale.

One tech giant currently making concrete progress in that regard is Tesla. The futuristic tech and engineering company owned by the eccentric billionaire Elon Musk has already been building integrated battery systems in cars for over a decade. This makes it a qualified contender to take on such a challenge.

Quality control, high-level innovation, and extensive expertise by a bevvy of researchers, scientists, and engineers at Tesla are currently informing the process of creating high-capacity batteries that can replace or integrate seamlessly with the grid. The particular products we are referring to here are Teslaâ€™s grid Powerpacks.

But are they truly viable technology?

Tesla Powerpacks: What Are They?

Teslaâ€™s Powerpacks are essentially high-capacity, rechargeable lithium-ion batteries. Each Powerpack comprises an array of 16 individual battery pods, each having its own DC to DC converter and coupled with an internal cooling and heating system for thermal stability in a wide range of temperatures (between -30Â°C to 50Â°C). Under the hood of a Powerpack are hundreds of sensors that monitor the health and performance of the system in real time. When combined, the cells can produce a power output ranging from 100KWh (for Powerpack Model 1) to 200KWh (Powerpack Model 2). The Powerpacks can be combined to generate 1MW and upwards of electricityâ€”sufficient output to power whole cities.

What Are the Batteries Made Of?

Tesla batteries are a product of extensive research and are built to be as long-lasting as possible to deliver the best value to end users. According to Elon Musk, the Powerpacks utilise NCA lithium-ion batteries with a nickel (80%), cobalt (15%), and aluminium (5%) mix for the cathode and an anode made of graphite. 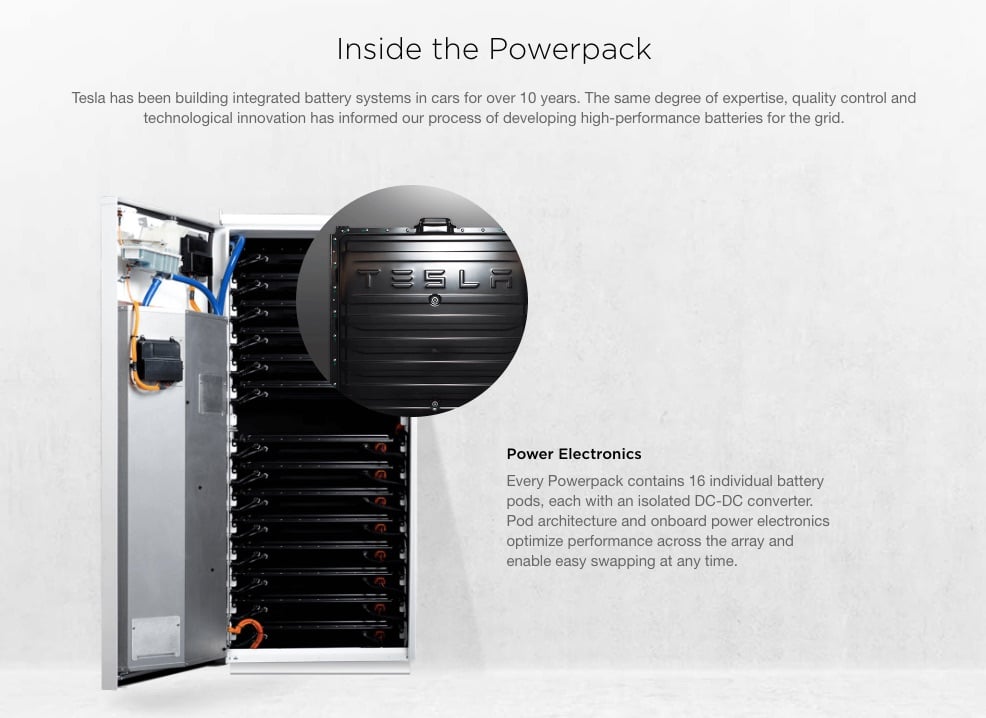 Tesla Powerpacks are currently being used to build smart microgrids by combination with conventional power sources and renewables. These standalone energy systems can be used to consolidate or replace power generation from the main grid and ensure the stability of output under circumstances of interrupted or non-uniform supply.

One notable example is Teslaâ€™s microgrid project installed in Taâ€™u, an island in American Samoa. The setup consists of a combination of 5,329 solar panels and 60 Tesla Powerpacks. During peak load hours, the batteries recharge themselves utilising power from the solar panels and can store enough power to supply the island for up to 3 days at full charge. There are many other such installations scattered all over the world.

A Microgrid controller monitors the entire system in real time. It works with proprietary software that employs a cost-optimisation algorithm designed to efficiently dispatch power generation between resources and allocate produced power to various load centres connected to the microgrid. The controller can react within milliseconds to abrupt changes within the system, ensuring a stable power supply.

Cumulatively, Teslaâ€™s Powerpack installations around the world contribute a fair quota to drive a low-emission global energy future. When combined with solar, wind, or other renewable energy systems, the Powerpacks can be utilised by any kind of industry to replace fossil fuels. We certainly donâ€™t see such remarkable power generation from battery-based energy systems every day.

Teslaâ€™s Powerpacks are especially useful for grid-balancing via peak shaving and load balancing. The batteries can function as a backup generator that draws power from the grid when utility rates are low and discharges during times of peak load to avoid unnecessary energy costs. 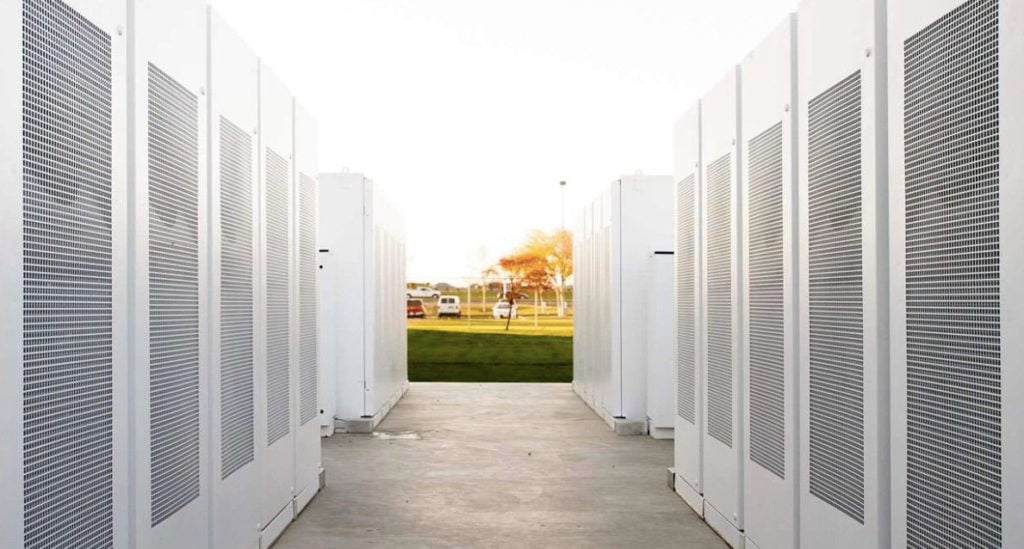 Teslaâ€™s Powerpacks are pushing the boundaries for sustainable energy in situations where existing power system output is disrupted due to adverse effects of natural disasters and other technical challenges.

A good example is the 100 MW/129 MWh project installed in Southern Australia following a storm that ravaged existing power systems and plunged the state into a blackout back in 2016. On completion, this became the largest Lithium-ion battery installation in the world by a long shot. Yet, the company is looking to push the boundaries even further by ramping up battery capacity in subsequent Powerpack models and increasing the number of Powerpacks per microgrid installation.

Itâ€™s hard to pinpoint a major drawback with Tesla Powerpacks being used as complementary energy storage systems. Teslaâ€™s Powerpacks meet stringent international standards for safe operation in all kinds of environments. While they are certainly a considerable financial investment, they are typically intended for commercial usage.

With the diverse applications and many advantages Teslaâ€™s Powerpacks offer at the global energy scene, are they valuable technology for us to pursue and utilise?

In my opinion, certainly. Teslaâ€™s high-performance batteries portend many significant applications for the future of sustainable energy storage and utility. Moreover, itâ€™s great to see another rapid shift from dependence on conventional sources of energy such as fossil fuels. As the technology advances, power output will be ramped up to meet growing demand. If the renewables industry keeps up current momentum, energy storage systems could become quite valuable in a few years.