The Case for Early-Stage Development of Recyclable Electronic Devices

The Case for Early-Stage Development of Recyclable Electronic Devices 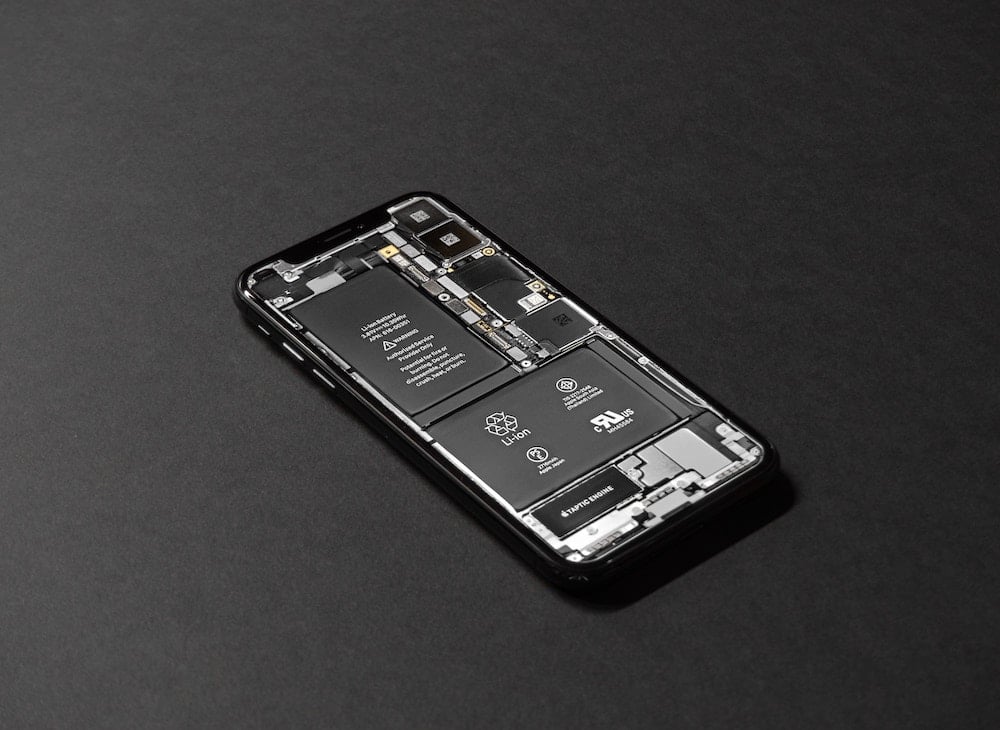 The current design processes for developing electronics often don’t factor in the result of a significant amount of material waste.

As Kim Preshoff so beautifully demonstrates in the Ted-Ed animated video presentation about sustainable phone production, until we find a way to develop more sustainable electronic devices, we need to pay more attention to recycling.

Really, what are smartphones made of exactly? Why do we make frequent trade-ins, and what happens when we discard them? It can be difficult to imagine, but mobiles are very much made of elements that are dug up from the Earthâ€™s crustâ€”and they usually end up there as well, once the phone serves its purpose.

Accordingly, we may as well think of how to integrate new devices into the circular economy and reuse the bits that can contribute to the necessary sustainable production of electronic devices.

Whatâ€™s in a Smartphone?

A smartphone may contain up to 70 chemical elements that are typically divided into two groups. The first group contains 17 rare earth elements, including scandium, yttrium, and lanthanides that, due to their magnetic and phosphorescent properties, enable interaction via touchscreen: consider the colour display, conductivity, and vibration.

The second group includes precious metals, most commonly gold, copper, and silver; but also palladium, platinum, tungsten, aluminium, and lead, which are responsible for the circuitry. 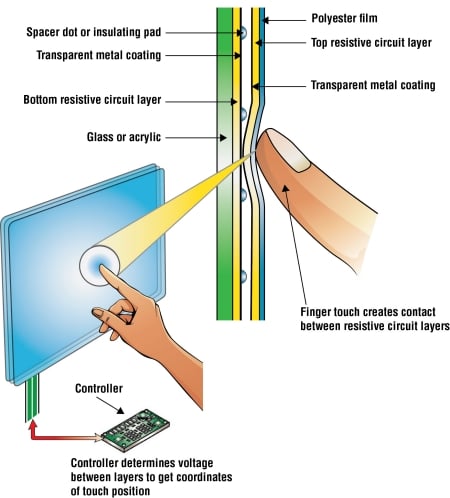 Although gold, silver, and copper are now used less because smartphones and other devices are tinier than ever, they still shouldnâ€™t be neglected as participants in the electronic device components; after all, if we were to extract all the precious metals from the 2.5 billion smartphones used in the world in 2018, we would have amassed 85,000 kg of gold, 875,000 kg of silver, and 40 million kg of copper.

These statistics don't factor in other electronic devices that will eventually be dumped as e-waste, producing questionable aftermath in regards to sustainabilityâ€”both in terms of production and recycling. Moreover, it also doesnâ€™t factor in the tonnes of waste produced from packaging and branding. Nor does it address the indirect detrimental consequences of the excavation methods used to get to those 70 elements, which often involve open-pit mining: an operation that affects both the health of the people who work there and the surrounding ecosystems.

Why Should We Be Concerned About E-Waste?

A prominent problem with electronic waste is its high toxicity, even in small amounts. Additional issues include the lack of government e-waste management policies, improper recycling, and insufficient public awareness about the environmental impact of frequent smartphone replacement. We shouldnâ€™t disregard the missing corporate social responsibility (CSR) effort on the companiesâ€™ behalf.

Also, smartphones tend to be aging faster as time goes by. Most people replace their smartphone within a year or two of purchase. How much of this high replacement rate is due to a real necessityâ€”such as the structural inability of smartphones to keep up with new technologiesâ€”and how much of it is a marketing hack is difficult to evaluate.

There is a strong case for the claims that smartphones are the epitome of planned obsolescence. Certain trade-in methods, such as handing in a competitorâ€™s old phone, only to get a new one from the brand in questionâ€”or otherwise simply leaving users with failing software in their older phonesâ€”raise more than a few concerns.

But giving your phone someone else to use is still a better way to extend its life than just dumping it â€˜far away from homeâ€™, where toxic fumes from cadmium and mercury are released due to inadequate melting procedures, which harm the health of the workers involved. Consider Ghanaâ€™s district, Agbogbloshie: the biggest e-graveyard in the world, and a painful source of livelihood for local citizens. 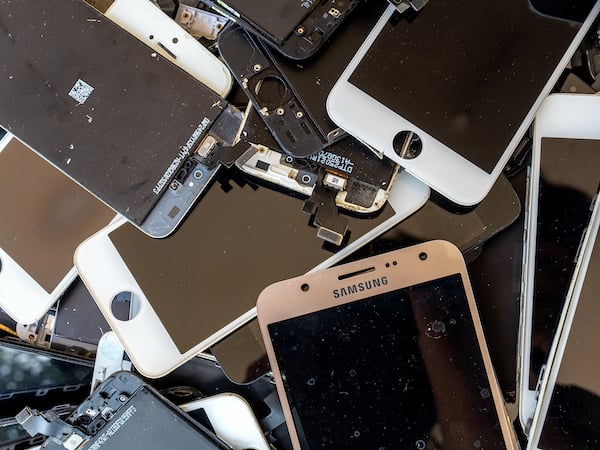 A pile of discarded smartphones. Image courtesy of Bigstock.

What Happens to Electronic Waste?

Only 25 percent of all e-waste is recycled. The rest goes to landfills and incinerators, mostly in underdeveloped countries, which end up serving as the worldâ€™s dumpsters due to the lack of regulation and fines.

Currently, the biggest overall contributor to e-waste in the world seems to be China, with U.S., Japan, India, and Germany next in line. However, the per capita numbers are much larger for the U.S, Japan, and Germany, which means that these countries have a fair share of responsibility in creating toxic e-waste.

European countries have long ago imposed electronic recycling policies, but the results are minimal, which may be a product of the focus on incentivising, as opposed to issuing fines. The worldâ€™s worst electronic offenders per capita are in fact European countries.

Interestingly enough, not all e-waste that ends up in China is produced there. Until recently, the country collected waste from all over the world, but it has now imposed new regulations and banned waste import to attempt to avoid harmful consequences. As it turns out, local moves have a global impact that we shouldnâ€™t turn a blind eye to. 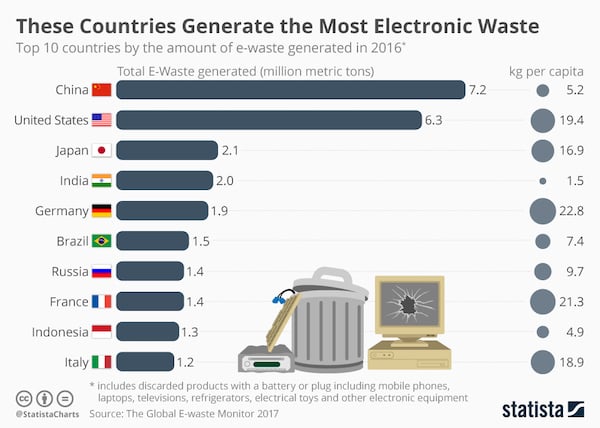 Chart displaying countries which generate the most e-waste. Image courtesy of Statista.

With all of the above in mind, we should start to pay more attention to what happens to electronic devicesâ€”starting from early-stage product development. Even though we cannot instantly instil ethics into companiesâ€™ CSR policies all at once, there is still plenty to be done in terms of recycling old parts:

The benefits and the urgency of sustainable electronics become even more obvious in view of some of the colossal numbers related to e-scrap. We have one planet, for now, and its resources are finite.

Until we come up with something better, shiny new gadgets must not automatically equal progress. It's not only good job ethics and common sense, but also a best business practice to prioritise utility and practicality over branding.