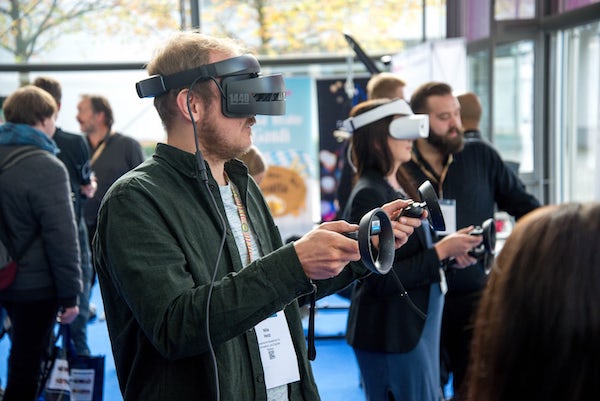 Virtual reality (VR) and augmented reality (AR) are no longer exclusive to video gaming. Although the early development of these technologies focused on this industry, VR and AR are now used for a broad range of other applications and use cases such as education, virtual conferences, and fashion.

However, due to the relatively high cost of VR and AR devices, the technologies are not in easy reach for the majority, and this is a challenge that researchers have been looking to overcome since the technologiesâ€™ inception.

Now, a research team from Pohang University of Science and Technology (POSTECH) in South Korea claim to have developed moldable nanomaterials and a printing technology using metamaterials which could enable the commercialization of inexpensive and thin VR and AR devices.

The teamâ€™s research findings, which were published in the journal Nature Communications on May 8, claim that they solve the issue of device size and high production costs that have been problematic to previous research efforts.

Using the principle behind metamaterialsâ€”substances that create an illusion of â€˜disappearanceâ€™ by adjusting the refraction or diffraction of lightâ€”ultrathin metalens technology was recently selected as a top 10 emerging technology with the potential to change the world at the 2019 World Economic Forum. In order to make metamaterials, however, artificial atoms smaller than the wavelengths of light must be constructed and arranged.

Until now, metamaterials have been produced using a method called electron beam lithography (EBL) but its slow speed and high cost have stood in the way of using it for commercializing affordable metamaterials.

To get over these challenges, the Korean research team, working with colleagues from Korea University, developed an entirely new nanomaterial based on nanoparticle composite that can be freely molded while simultaneously exhibiting optical characteristics suitable for metamaterial fabrication. At the same time, the team also developed a printing technique that can be used to shape the materials in a single-step process.

Professor Rho, who led the research, stated, "This one-step printing technology of nanomaterials allows the fabrication of metamaterials over 100 times faster than the conventional electron beam lithography." According to Rho, the teamâ€™s new ultrathin metalens can be used to make the existing large and thick lenses in AR and VR devices â€œdramatically lighter and smallerâ€.

They may also find potential applications in curved or flexible panels, which facilitates the use of metamaterials in bendable wearable devices at a lower cost.