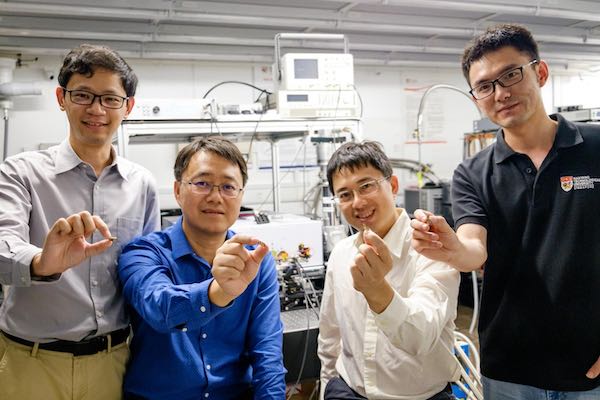 Researchers from the Nanyang Technological University in Singapore and the University of Leeds in the UK have developed a new type of laser technology that will revolutionize the manufacturing of lasers.

Researchers from the Nanyang Technological University in Singapore and the University of Leeds in the UK have developed a new type of laser technology that will revolutionize the manufacturing of lasers.

The research in electrically driven topological lasers lasted two years and conducted by a team of physicists and engineers from NTU Singapore and material scientists from the University of Leeds.

The goals of this research were to combat current laser manufacturing flaws by exploring the topological states of matterâ€”leading to the creation of the first electrically-driven topological laser.

Basis of the Research

The concept for a topological laser comes from the theoretical discoveries of topological phases of matter done by scientists D. J. Thouless, F. D. M. Haldane and J. M. Kosterlitz in the 1980s, for which they were awarded a Nobel Prize in Physics in 2016.

Even though topological phases are a recent concept in the physics of condensed matter, as theyâ€™re emerging as the potential basis of future technologies in the fields of optics, photonics, and quantum computing.

Topological phases of matter imply that materials called topological insulators (which are materials that have insulating properties in their interior but have a highly conductive surface), exhibit topological features allowing particular particles (such as photons and electrons) flowing within the material to round corners and circumvent manufacturing flaws without scattering. 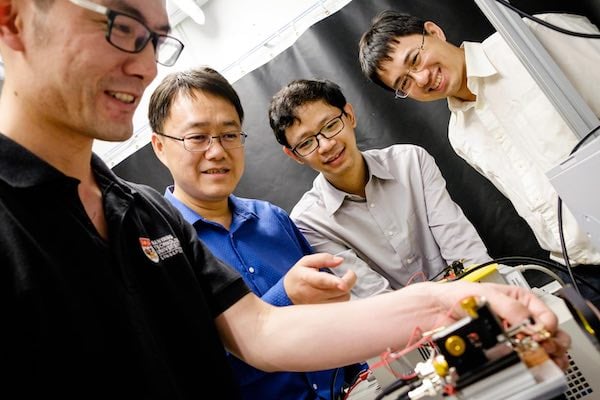 Today, much of our technology depends on electrically-driven semiconductor lasers. Devices based on these lasers utilize light to read, write, transmit and receive data to perform a specific function.
Everyday devices that use semiconductor lasers include barcode scanners, laser printers and laser disk readers. Lasers are also commonly used in research, manufacturing and in medical fields.

Nevertheless, these types of lasers exhibit manufacturing flaws that leave many produced batches with unusable laser modules due to the imperfections that arise in manufacturing and packaging. This happens because laser light scatters when it encounters defects in the material itâ€™s traveling through.
Such a problem is unavoidable when it comes to conventional semiconductor lasers due to their design and manufacturing processes.

To combat the problems that arise in laser manufacturing, the team from NTU and Leeds applied the scientific phenomenon of topological phases of matter to a practical electronic device.

The team developed a new laser design that incorporated a valley photonic crystal which is a photonic analogue to the topological material known as a two-dimensional valleytronic insulator.

Like regular semiconductor lasers, this laser is fabricated out of a semiconductor wafer, with the key difference being the design of its structure. The topological laserâ€™s microstructure is comprised of quasi-hexagonal holes, drilled into the semiconductor wafer and arranged in a triangular lattice, making it highly compact.

Light passing through the microstructure of the topological laser is capable of propagating within the lattice in a unidirectional matter. Rounding the sharp edges of the triangles without reflection accumulating light energy and forming a laser beam.

This occurs thanks to the photonic topological material used to manufacture the laser module.
A notable characteristic of this laser is that it emits light at terahertz frequencies, which on the electromagnetic spectrum; found between microwaves and infrared radiation. 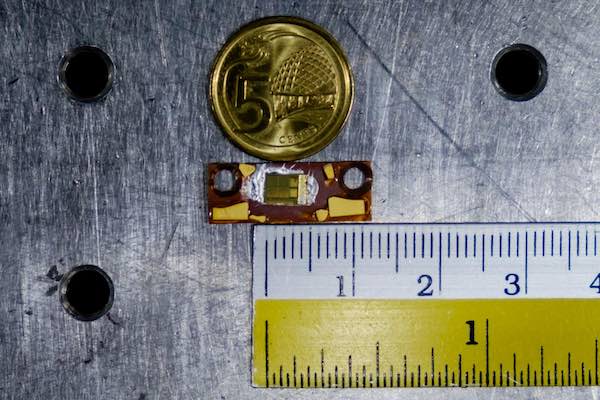 A close up image of the topological laser prototype. The prototype measures 4mm in length, a Singapore 5 cent coin was placed above it for size comparison. Image Credit: Nanyang Technological University.

Not the First Topological Laser

The problem with conventional implementation of the laser was its size, due to the multiple modules it was comprised of, as well as its reliance on another laser (a semiconductor one), to power it.

Emerging Technologies Based on the Research Findings

Even though this type of technology is in its very early stages it shows a lot of promise. The field of optics and photonics is essential in current and future technology and can potentially benefit a lot from topological lasers.

To begin with, this technology can potentially eliminate a lot of wasteful manufacturing practices and reduce the amount of defected laser modules.

Moreover, due to the terahertz frequencies of the light outputted by the laser, it might find new uses in sensor technology, computing and high-speed optical and wireless data transfer. Which includes areas such as quantum computing, Li-Fi communications, LIDAR and similar technologies.

All in all, as new research is conducted and this technology gets funding, we might see topological lasers become the basis of our future communication and computing devices.