The Fundamentals of Optoelectronics

The Fundamentals of Optoelectronics

Optoelectronics is an emerging technology that involves a combination of photons and electrons. Over the past years, optoelectronics has led to the widespread use of Light Amplification by Stimulated Emission of Radiation (LASER) and optical fibres applications.

For a transmitted optical signal to reach a light-detecting component, an optical channel, such as an optical fibre, is employed to guide the signal. Free space (or free air) is also a suitable optical medium for simplicity. Other components in an optoelectronic system may include amplifiers, preamplifier circuitry, and automatic gain control mechanisms.

An example of lasers being operated in an optoelectronic laboratory. Image Credit: Cavendish Laboratory, University of Cambridge.

Differences Between Electrons and Photons

Of course, with optoelectronics, aka photonics, being a combination of both photons and electronics, it is worth at this point considering the core differences between photons and electrons. Put simply, photons are peculiar to optical interconnections, while electrons are peculiar to electrical interconnections. Electrons and photons also have different fundamental principles: photons in an optical medium travel at the speed of light in free space. Electrons, on the other hand, do not move freely at the speed of light.

Due to the fact that electrons obey Fermi-Dirac statistics, they are fermions. Photons are bosons because they obey Bose-Einstein statistics. 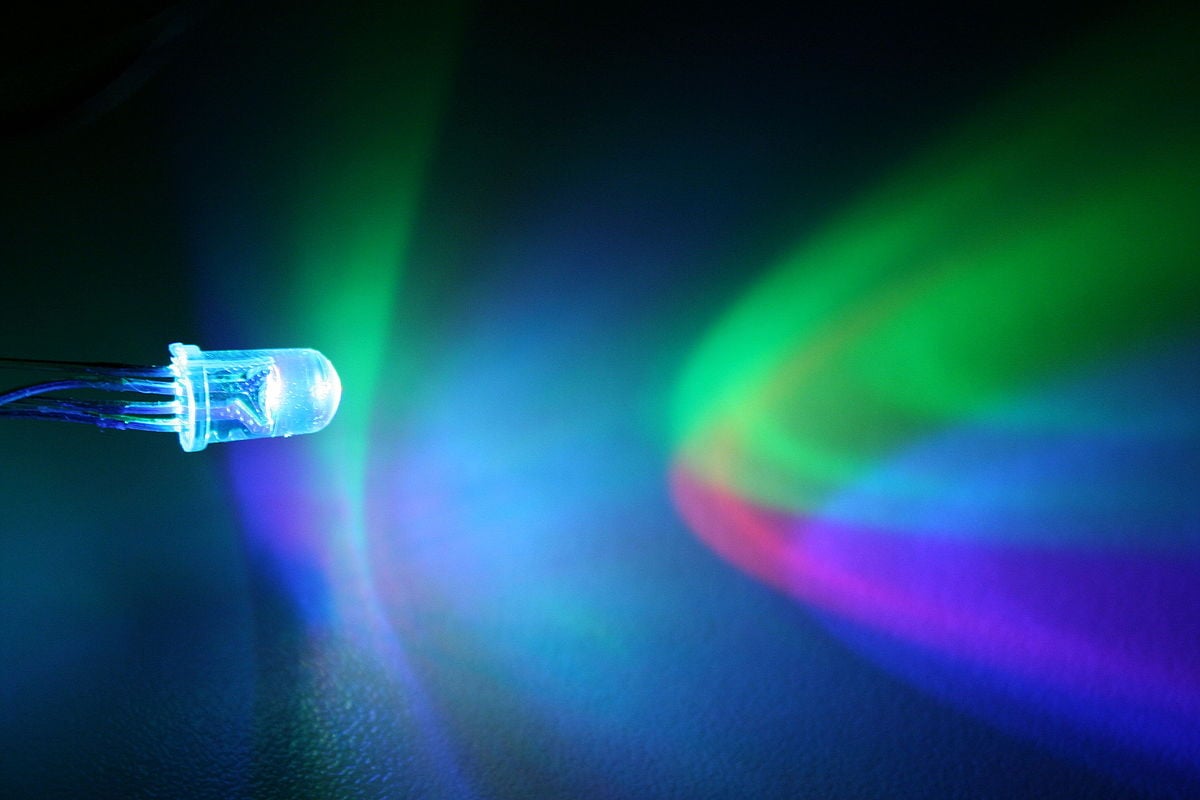 A close-up of an LED. Being an RGB (red, green, blue) light-emitting diode, it is pictured next to a projection of red, green, and blue light. Image Credit: Viferico, Wikimedia Commons.

A light-emitting diode, or LED, is an optical source made from a p-n junction. In an electric circuit, current flows through it when the diode is forward biased. In an LED, light is emitted into a circular cone. An LED (which is technically not monochromatic), is inexpensive, easy to use, and is even high in efficiency: it consumes power as low as 100 milliwatts.

Materials (such as gallium arsenide and gallium arsenide phosphide) that are used in the fabrication and manufacturing of LEDs make it suitable for use in optoelectronic applications. These materials allow light emission in the visible spectrum.

A PIN photodiode is an optical detector. Its p-n junction is separated by an intrinsic semiconductor layer. Current flows through a P-I-N photodiode when reverse-biased. Commonly, a PIN photodiode is manufactured from materials such as indium gallium arsenide.

A vertical-cavity surface-emitting laser (VCSEL) is an optical source used in optoelectronics applications. (Other examples of optical sources are arc lamps and incandescent lamps.)

A VCSEL is efficient in power as it consumes power as low as 20 milliwatts. Like an LED, a vertical-cavity surface-emitting laser emits power into a circular cone. The component is fabricated and manufactured on wafers. 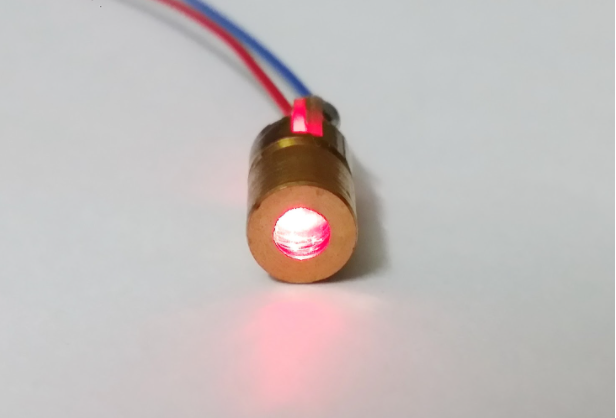 A laser diode is, just like a light-emitting diode, made from a p-n junction and is forward biased to allow the flow of current. Laser amplification occurs in the componentâ€™s resonant cavity. Edge-emitting and surface-emitting are the two main types of laser diodes.

The power consumed by laser diodes is (again, similarly to LEDs) 100 milliwatts. A laser diode is monochromatic, and being an optical source, its light is emitted into an elliptical (oval-shaped) cone that results in an elliptical distribution of light in optical channels. This makes coupling difficult and inefficient.

Signals can be modulated and demodulated via optoelectronic systems. For this process, an input signal is fed into a signal-modulating processor to obtain a modulated signal that is then passed into a light-emitting source, such as an LED.

The light emitted by the light-emitting source (which, again, is what carries the modulated signal), is channelled via an optical fibre. A common problem experienced in this stage involves a slight distortion of the signal due to attenuation, (namely the process by which the amplitude of a given output, in this case a signal, is reduced). A light-detecting component, such as a phototransistor or photodiode, receives the signal from the fibre-optic channel in question. To obtain the original signal, a signal demodulating processor demodulates the signal from the light-detecting component. 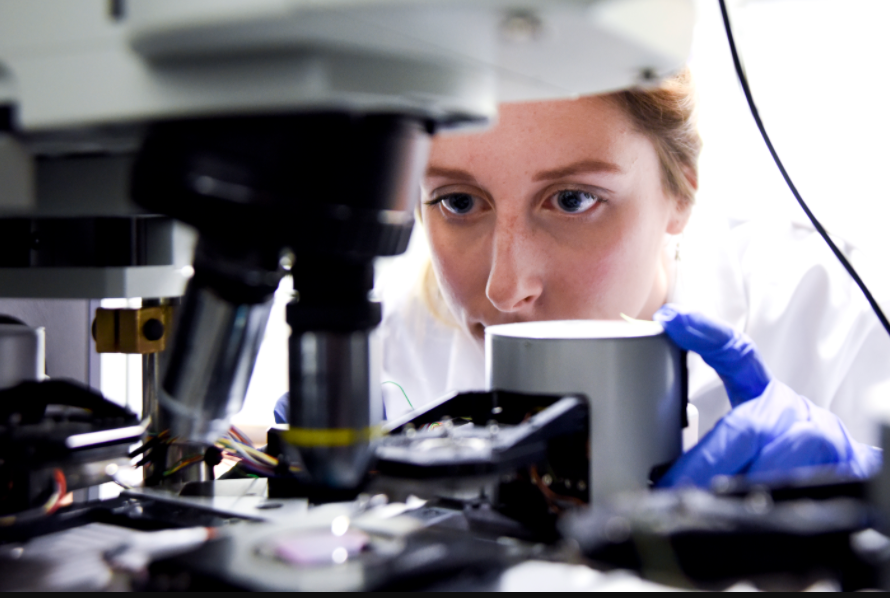 The Role of Optical Fibres in Optoelectronic Communication

Apart from what is simply free air, an optical fibre is a good example of a guided wave channel used in optoelectronics applications. Light waves in long-distance communication can be guided by optical fibres until such communication reaches its destination (usually a light detector). Also, optical fibre technology acts as connective links for communication, such as in telecommunication and television networks. Optical fibre exhibits a phenomenon known as total internal reflection.

The multiplexing of signals is possible with the use of optical fibres (aka fibre optics). In this context, signals of different wavelengths can be transmitted in one single transmission. Major types of such multiplexing are time-division, frequency-division, and wavelength-division multiplexing.

The field of optoelectronics has a wide range of applications. The technology is most especially featured in long and short distance communication systems. Thanks to the high bandwidth provided, optical fibre is a suitable component in the telecommunication industry.

In advanced optoelectronics applications, moreover, an optical fibre amplifier helps to eliminate the conversion of light pulses into electrical pulses that would be amplified and then converted to light pulses. This saves hardware costs and power in optoelectronic devices.

With the emergence of optoelectronics, more consumer productsâ€”such as DVD players, scanners, liquid crystal display screens, and local area network routersâ€”are manufactured. Of course, the technology also finds applications relevant to industrial use, such as digital medical imaging, high-speed optical data links, infrared cameras, and indeed many other areas that will benefit engineers and other researchers indefinitely.