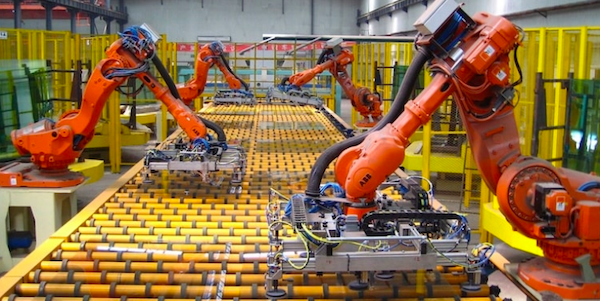 The manufacturing world is increasingly embracing automation, with the EU seeing 12% growth in robotics last year. Global workforce saturation is rising as countries modernise their labour strategies. However, the UK is struggling to keep up: by comparison, its robot sales fell by 3% in 2018.

The UKâ€™s Concentration of Robot Units

The UK fits into this European equation, though itâ€™s not contributing to the continentâ€™s success. While the global robotics average is 74 units per 10,000, the UK only claims an average of a 71:10,000 robot-to-human workers ratio. As the IFR explains, this is the worst figure of any G7 country, and lags behind other EU members.

Hereâ€™s the density breakdown per 10,000 employees for 10 key European countries:

This disparity is understandable given the UKâ€™s meager robot sales since 2012. The country has recorded an annual 5% decline, only compounding this disadvantage. Unimpressive government funding, paired with Brexit-related concerns, are stalling corporate investment. Resultantly, the IFR only forecasts moderate robotics growth over the next few years at the present rate.

Currently, the UK ranks 22nd worldwide in robotics adoption. By contrast, modernised nations like Germany can expect at least 5% annual growth through 2020. This is driven by both the general industry and the automotive industry, per the IFR. 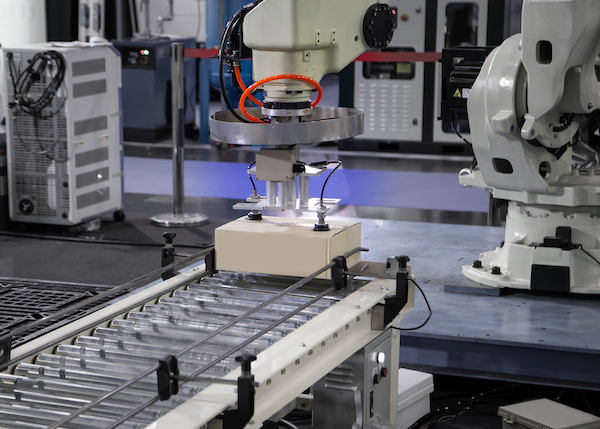 The said, stark difference between the UK and the rest of Europeâ€™s robotic markets does have some important context. The World Bank estimates that manufacturing accounted for 9% of value added to the UKâ€™s 2018 GDP (gross domestic profit). This pales in comparison to Germanyâ€™s 21%. It also claimed a manufacturing output per head of $8,600, per 2015 data. The UK only claimed $3,700. 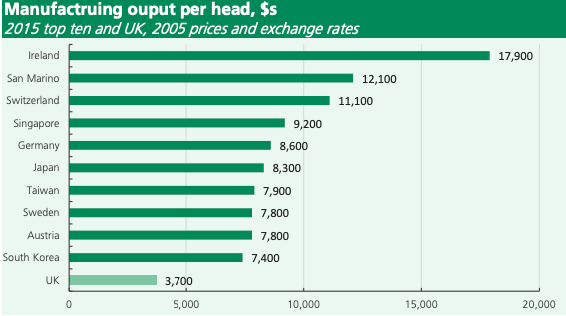 Manufacturing output as a measure of dollars. Image courtesy of the House of Commons Library.

Itâ€™s not far-fetched to believe that this production advantage may have added value to Germanyâ€™s economy. After all, government research in 2017 claims robotic automation could inject Â£184b into the UKâ€™s economy over a 10-year span. Saved labour costs and increased efficiency are major benefits. The countryâ€™s current unemployment rate of 3.9% suggests the labour market could accommodate increased automation in the coming years.

According to a 2018 Parliament UK briefing, the UK ranks 9th globally in manufacturing. This ranking has remained stable, as manufacturing output changes impactfully over longer periods. That said, there, again, remains plenty of room for growth. As the world embraces its new digital direction, robots will play key roles in advancing fields like healthcare, IoT, and more. 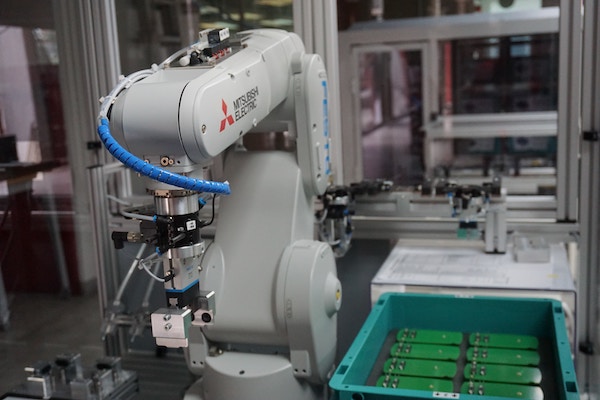 Though we commonly associate robotics with traditional, mechanised manufacturing, other growth areas are continually emerging. Those may become key economic sectors over the next decade. As Investopedia explains, manufacturing and production account for less than 21% of the UKâ€™s total GDP.

Though improvements are certainly possible, this may somewhat contribute to the UKâ€™s lackluster robotic density. Luckily, the IFR expects moderate automotive modernisation to occur (though investment uncertainties raise more questions than answers). Ultimately, companies and governments in the UK must consider how robots can positively impact other industries.

Acute growth can occur alongside greater investment, though modernisation is a long-term development. If the UK doesnâ€™t invest broadly in automation, other European nations will outpace it economically.

Similar to Germany, France expects to ramp up robotic installations by 5 to 10% yearly, heading into 2020. Balkan countries will experience continued growth as the automotive industry flourishes.

In the U.S. and Canada, robot adoption is sharply growing in response to automotive and general manufacturing needs. South Korea, Japan, and Singapore are robotic superpowers by a wide margin. Exports are also integral to economic success in these countries of course, just as they are in the UK.

All considered, should the UK adopt a new automation strategy befitting of the modern ageâ€”the country can then begin climbing the ranks.