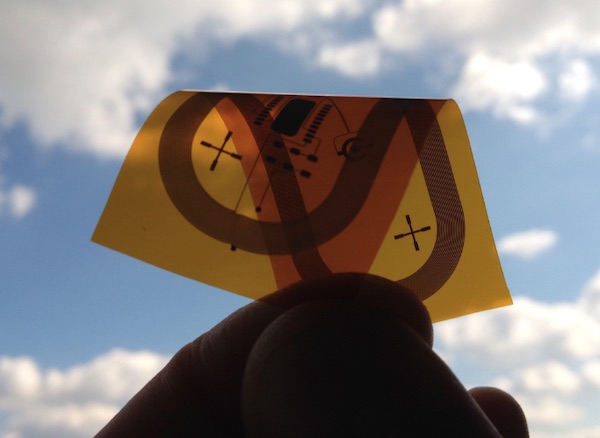 Researchers from the School of Electrical Engineering at KAIST (Korea Advanced Institute of Science and Technology) have created a multifunctional electronic platform that can mechanically transform its shape, flexibility, and stretchability.

The system has been called a â€˜transformative electronic systemâ€™ (TES) by researchers, as it integrates flexible and stretchable electronics with serpentine metal that interconnects onto a transformative platformâ€”made using a composite of gallium (99.99% of it) and soft, biocompatible silicone encapsulant (~60kPaâ€”i.e. the unit of pressure measurement, kilopascals).

These properties allow the platform to reconfigure its shape, stiffness, and stretchability through a temperature-dependent phase transition. 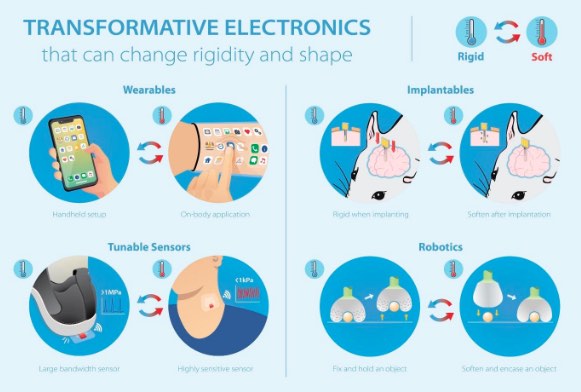 An infographic that illustrates 4 of the many applications of transformative electronics: from left to right, top to bottomâ€”wearables, implantables, tunable sensors, and robotics. Image Credit: Science Economy News.

Jeong also explains that he and his researchers decided to use gallium for their experiments, as the chemical element is particularly compatible with â€œbiological applicationsâ€, namely â€œbecause of its biocompatibility, high elastic modulus (9.8 gigapascals, or GPa), and ideal melting temperature (29.8Â°C),â€ the researcher said. â€œ[This] makes it solid at room temperature (25Â°C) and liquid at the temperature of biological tissue (32Â° to 37Â°C).â€ 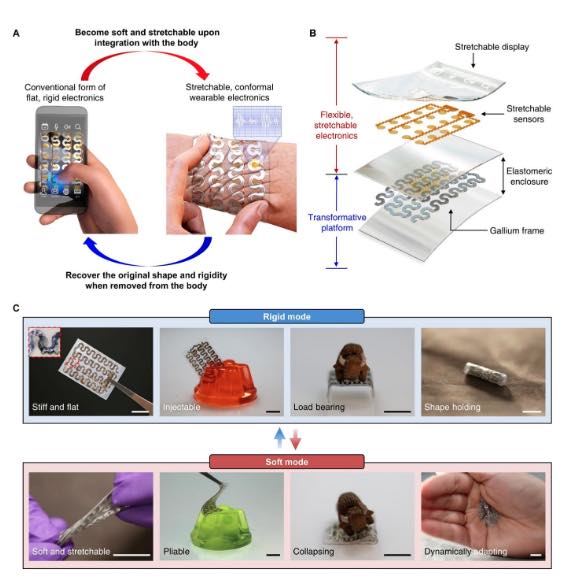 Schematic illustrations and photos of a transformative electronics system that can shift its form from a conventional rigid electronic device to a soft, stretchable electronics format (or vice versa). This is achieved through a temperature-dependent phase transition. Image Credit: Korea Advanced Institute of Science and Technology.

By being embedded in a soft polymer, the meltable and freezable features of gallium enable large rigidity tuning (between a few tens of kPa and around 10GPa) when applied to, or detached from, tissue.

â€œThat is, a TES fabricated with gallium can be rigid at room temperature or below but becomes flexible and stretchable when applied to the skin or [when the user] applies temperature above 30Â°C, due to the liquefaction of gallium within the silicone encapsulant,â€ Jeong explains.

In other words, once the transformative electronic platform comes into contact with a human body, the gallium metal encapsulated inside the silicone shifts to a liquid state and softens the whole electronic structure, making it both stretchable and wearable. The gallium metal then solidifies again once the structure is peeled off the skin, making the electronic circuits stiff and stable.

The result is a combination of flexible/stretchable electronics joined together with a transformative platform, which is built using gallium-elastomer composite.

When it comes to applications, Jeong says, one of the main goals of the research was to develop mechanically-reconfigurable wearable and implantable electronics.

However, the ability of TES to tune the deviceâ€™s stiffness and morphology enables its application in multipurpose electronics, including sensors, and robotics.

â€œFor example,â€ Jeong reveals, â€œTES can be used asâ€”not only tabletop or handheld electronicsâ€”but also wearable sensors according to the userâ€™s need as demonstrated in our paper.â€

According to the studyâ€™s author, pressure sensors would be another application of this technology, as the TES concept can potentially ensure the active tuning, namely in terms of the sensitivity and dynamic range of sensors.

â€œWhen the pressure sensor is rigid, its large dynamic range allows sensing of heavy loads, such as those generated by foot stepping,â€ says Jeong. â€œThe same sensor can be reconfigured to the soft form when it is necessary to capture gentle, sophisticated pressures, such as those associated with physiological processesâ€”as we demonstrated by sensing carotid arterial blood pressure using the device mounted on the neck.â€ 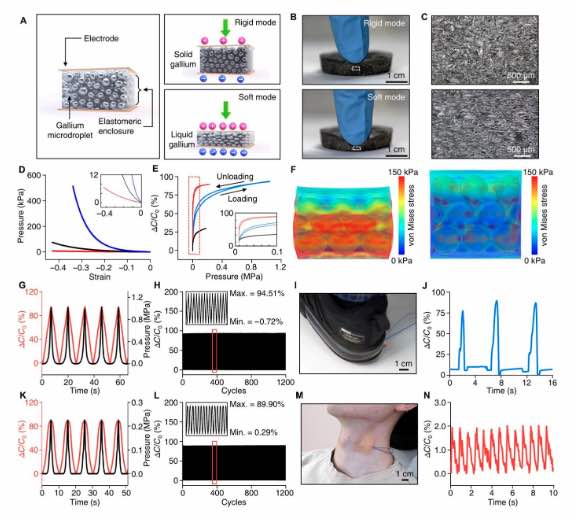 An application demonstration of transformative electronics for pressure sensing, with a focus on the tuning of both the sensitivity and dynamic range for versatile operation. Image Credit: Korea Advanced Institute of Science and Technology.

Jeong adds that, since this tunable sensing platform is highly versatile, the concept shown in his research could also be applied to sensing technology in a wide variety of mechanical parameters, including strain, bending, torsion, acoustics, and many others.

Moreover, while topical (i.e. â€˜applied directly to a part of the bodyâ€™) devices enable dynamic sensing capabilities, tissue injection expands the potential applications of the new research to biomedical devices.

These results show how the TES approach has consequently both reduced lesion size and inflammatory responses compared to tungsten needles of the same dimensions. This suggests that the transformative approach is more amenable to deep tissue embedding.

Finally, Jeong mentions how TES could also be used in robotics: its integration could help to develop autonomous machines that can accommodate the shapes of any objects that they interface withâ€”ensuring enhanced interaction and handling.

The Future of Transformative Electronics Systems

Given its above, multifaceted applications, this technology could indeed potentially reshape the electronics industry. But how far is TES from entering the consumer market?

â€œWe still need further investigation of gallium composite materials or other types of phase change materials to enable rapid bidirectional transformation (i.e., from rigid to soft or vice versa) to expand the potential of this system for a wide variety of electronics,â€ Jeong explains.

Development and integration of thin, flexible thermoelectrics with TES will also expedite the implementation of this technology by allowing accurate, reliable control between the soft and hard state.

However, â€œfor reliable and durable operationâ€, Jeong concludes, â€œmaterials and packaging schemes that provide robust sealing of phase change materials will need to be further developedâ€.