Types of Diodes and Their Applications

Types of Diodes and Their Applications 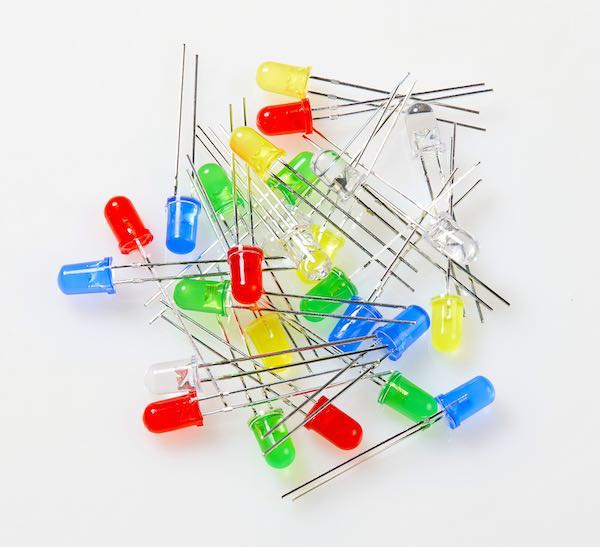 A diode is a two-terminal (consisting of a cathode and anode terminal) device that allows current to flow in one direction. Diodes are used in electronic circuits for rectification, voltage regulators, and so on.

Diodes, which first appeared as vacuum tube diodes (aka thermionic diodes), were invented by Frederick Guthrie in 1873. They are a chief example of passive components, e.g.resistors. However, unlike resistors, diodes donâ€™t obey Ohmâ€™s law, because they are a non-linear electronic component. The current that flows through it is exponentially proportional to the voltage at its terminals. The component has low impedance when it is forward-biased, which causes the said flow of current.

Diodes have a high resistance when they are reverse-biased, preventing current from flowing. Reverse-biasing is achieved when a diodeâ€™s cathode terminal is made more positive than its anode terminal. 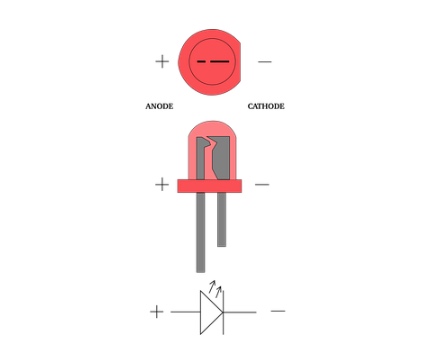 A diagram that shows the pin configuration of a light-emitting diode.

Semiconductor diodes, like silicon diode and germanium diodes, are characterised by having a knee voltage (or threshold voltage). This is the minimum voltage, when the diode is forward-biased, to start conducting and allowing current to flow. Typical silicon diode and germanium diode have a threshold voltage of about 0.7V and 0.3V respectively (as per the below graph).

Further types of diodes are as follows:

A PN diode conducts electricity by using the movement of holes and electrons. The p-type (which makes up the anode terminal) is the majority hole carrier, while the n-type (which makes up the cathode terminal) is the majority electron carrier. When the component is forward-biased, the holes and electrons move towards one another and combine, thus allowing current to flow. This is caused by the electric field from the voltage source biasing the diode. The â€˜depletion regionâ€™ of the component widens when it is reverse-biased.

A PN diode can be damaged at reverse-bias when the reverse breakdown voltage of the component is reached.

The PN diode has applications in the rectification of AC to DC, reverse polarity protection, diode gates, and diode clamps.

This is a type of diode that allows current to flow in two directions. Unlike the PN diode, the Zener diode can be operated in the reverse breakdown voltage region. The Zener diode has dynamic resistance which is inversely proportional to the current that flows through it.

The Zener diode has applications in line regulation and load regulation, as well as voltage supply regulation. 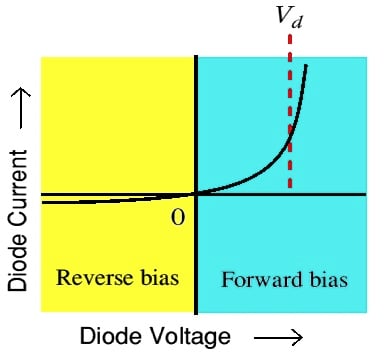 A graph demonstrating how the amount of current that runs through a diode depends on the way the voltage is applied. Image Credit: The University of St. Andrews.

The Schottky diode is commonly referred to as a â€˜hot carrierâ€™ diode. It is made from the combination of Aluminum or Gold and the n-type silicon. It has high-frequency switching abilities and is capable of switching between conducting and non-conducting states. The junction capacitance in a Schottky diode is small thus it has a low forward voltage drop and a high leakage current. It can be utilized in electrical circuits that need fast switching speed. It also finds applications in power supply rectification.

PIN diodes are a type of diode that is also made from n-type and p-type silicon. However, it has a layer of lightly doped silicon separating the n-type and the p-type material. This causes it to have a low junction capacitance when reverse-biased.

It is used where high frequencies are required in electrical circuits for switching in RF and microwave applications. It can act as a variable resistor whose value is controlled by an applied DC forward-bias current, thus making it a current-controlled resistor. The component is also used as photodetectors in fiber-optic systems.

Like PIN diodes, Tunnel diodes are also used in high-frequency applications. They are operated in forward-bias and can exhibit negative resistance. Negative resistance happens when an increase in applied voltage causes a decrease in current that flows through the diode.

This type of diode is known as a variable capacitor diode. It is designed in such a way that its junction capacitance is varied when reverse-biased. It can be used in high-frequency RF circuits.

This is a type of diode that exhibits electroluminescence when forward-biased. A light-emitting diode (or LED) is made from inorganic semiconductors like Aluminum Gallium Arsenide (AlGaA) or Aluminum Gallium Phosphide (or AlGaP).

The typical input current to an LED is 35OmA. The component consumes low power as it can be operated from voltage supplies as low as 3V. Thus, it consumes less power. It finds applications in household lightening and can also be used as flashlights in mobile phones.