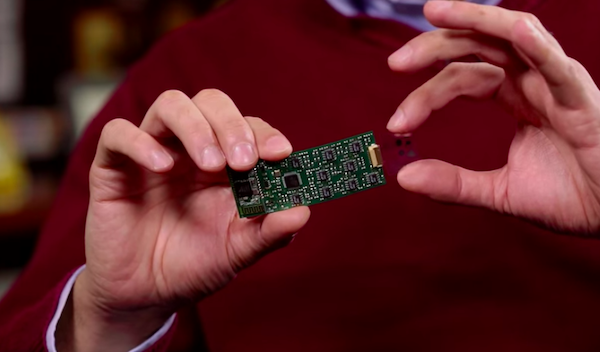 A team of scientists at the University of California, Berkeley, is designing and developing wearable sensors that can detect what's in your sweat.

The UC Berkley team hopes that, one day, monitoring sweat with sensors could eliminate the need for more invasive and uncomfortable procedures, such as the taking of blood, and provide real-time data and updates on health information such as dehydration.

Ali Javey, Professor of Electrical Engineering and Computer Science at UC Berkley, said, â€œThe goal of the project is not just to make the sensors but start to do many subject studies and see what sweat tells us â€” I always say â€˜decodingâ€™ sweat composition. For that, we need sensors that are reliable, reproducible, and that we can fabricate to scale so that we can put multiple sensors in different spots of the body and put them on many subjectsâ€¦"

How Do the Sensors Work?

Traditional measuring involves the collection and analysis of sweat which, whilst providing valuable information, does not allow dynamic monitoring of changes.

By using a spiralling microscopic tube that wicks sweat from the skin, the sensor can track how quickly sweat moves through it to determine 'sweat rate'. These tubes also contain chemical sensors that can detect concentrations of substances such as electrolytes (potassium and sodium) and metabolites (glucose).

The UC Berkeley team worked with the VTT Technical Research Center of Finland to devise a way to quickly manufacture the sensors. In the end, they settled on a roll-to-roll processing technique that enables high-volume, low-cost production. 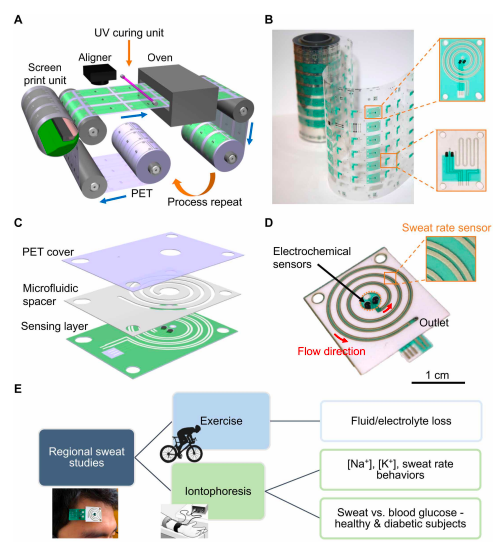 Schematics of fabricated sweat sensing patches for regional and correlative sweat analysis. Image courtesy of the American Association for the Advancement of Science.

To determine what sweat could tell researchers about the human body, they placed several sensors on different spots around volunteers' bodies and measured sweat rates and electrolyte levels during light upright bike exercise.

How Were They Made?

The sensor has two aligned layers.

The first layer hosts a patterned electrode system for transducing analyte concentrations and monitoring sweat rate. The second layer is a microfluidic adhesive layer with a sweat collection reservoir and a spiral microfluidic channel to guide sweat flow.

It is thought that these sensors could, in theory, be used with diabetes patients.

â€œThereâ€™s been a lot of hope that non-invasive sweat tests could replace blood-based measurements for diagnosing and monitoring diabetes, but weâ€™ve shown that there isnâ€™t a simple, universal correlation between sweat and blood glucose levels,â€ said Mallika Bariya, a graduate student in materials science and engineering at UC Berkeley.

This would be achieved by measuring and comparing sweat and blood glucose levels in heathy and diabetic patients.