Various Sensors and Their Applications for Smart Farming and Robotics

Various Sensors and Their Applications for Smart Farming and Robotics 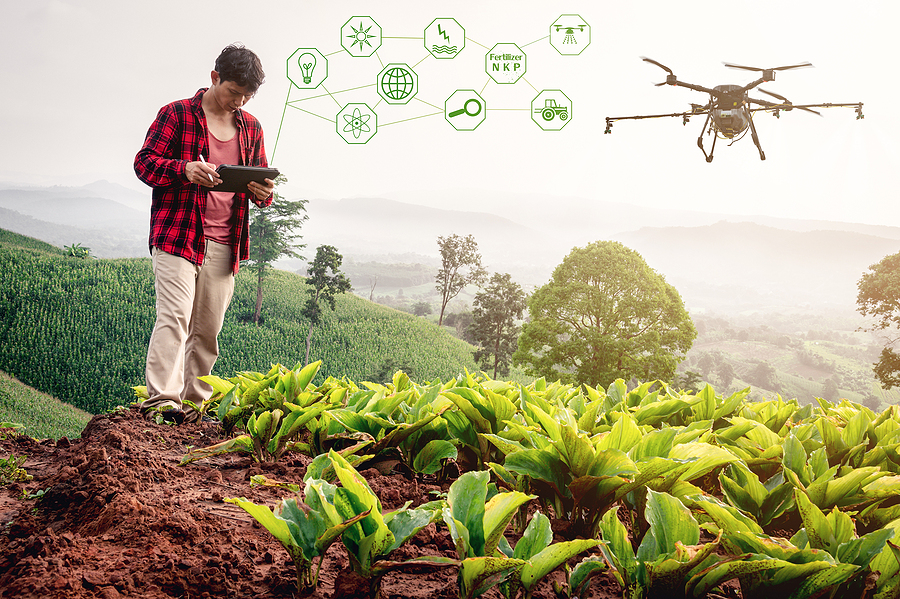 Smart farming is a form of agriculture that is informed by robotics and smart sensors, whose data acquisition capabilities enable them to feed crops with precisely what they need to ease the farmer’s job of cultivation. We look at the various sensor technologies required for modern, IoT-based agriculture.

The Concept of Smart Farming

Smart farming, aka precision agriculture, has many synonyms and subsets, including â€˜Agriculture 4.0â€™, â€˜satellite agricultureâ€™ and â€˜site-specific farmingâ€™. To apply one of the many definitions of these various smart farming terms, one would need to consider what the given agricultural technology focuses on: for instance, does it monitor and maintain the crops themselves, or the soil, or the harvester?

Specific smart farming terminology also, of course, concerns the type of technology used to achieve precision agriculture, and the whole concept would be nowhere near its current promising state if it werenâ€™t for the smart agricultural and silvicultural (forestry-related) robots and smart sensors. Accordingly, the next sections focus on such vital IoT technologies.

What Can a Smart Robot Do for Precision Agriculture?

It is hard not to think of robotics farming as a complex operation: the land needs constant monitoring and adjustment of human involvement to improve. And indeed, the smart farming system is complex, but even a simple farming robot such as an agricultural drone can perform an important task: observe a hard-to-reach field and send data about an impending storm, a swarm of pests, or other agricultural pitfalls.

Many farming robots donâ€™t look much different than the typical harvester or another traditional farming machine. Like the Agrobot strawberry harvester, some have as many as 24 hands and an AI-supported algorithm that detects the ripeness of the strawberries. 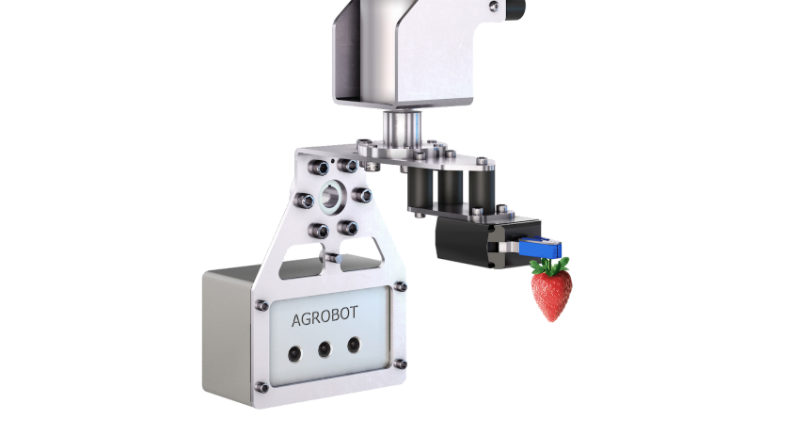 The strawberry harvester robot (manufactured by Agrobot) holds up a strawberry for inspection.

The idea behind farming robotics is to help farmers interfere with natureâ€™s variables in the most sustainable way. Getting as many insights from the soil, water, and air, and learning how variables interact is enabled by using information technology, agricultural mechanics, and smart sensors.

The Intricacy of Agbot Sensor Networks

When a system contains many sensors (which collectively form a sensor network), whoever designs it needs to consider what insights will be drawn into the robotic system and decide on such data-specific factors as the below four areas: the agricultural terrain environment, interference immunity, information processing time, and functional requirements and cost.

Any electronic device, including a sensor, must be designed and incorporated in a smart system with maximum immunity to interference. In other words, it must be able to operate, undisturbed, by an external source of interference (particularly electromagnetic waves).

According to the USGS (United States Geological Survey), the four factors that most influence crop agriculture are terrain, climate, soil properties, and soil water. Out of these, soil texture, soil depth, soil mineralogy, and temperature are less susceptible to intervention from farmers.

Precision requires real-time information processing of readings gathered from farming wireless sensor networks (or WSNs). The chosen computational algorithmic system needs to be able to decide which sensor readings to pick up at what time, identify missing readings, and predict how these readings will evolve over time.

Apart from IT and terrain factors, how specific farming sensor networks operate in the context of geographical location, and the farmersâ€™ preparedness to operate themâ€”as well as the cost of that interoperability, of courseâ€”are all factors that affect the application of different sensors in a system.

For example, consider: will such a robot address the particular needs of farmers at a location? Can they be trained to operate the land at a feasible cost? Will the resultant productivity counterbalance (and ultimately justify) the cost of application? 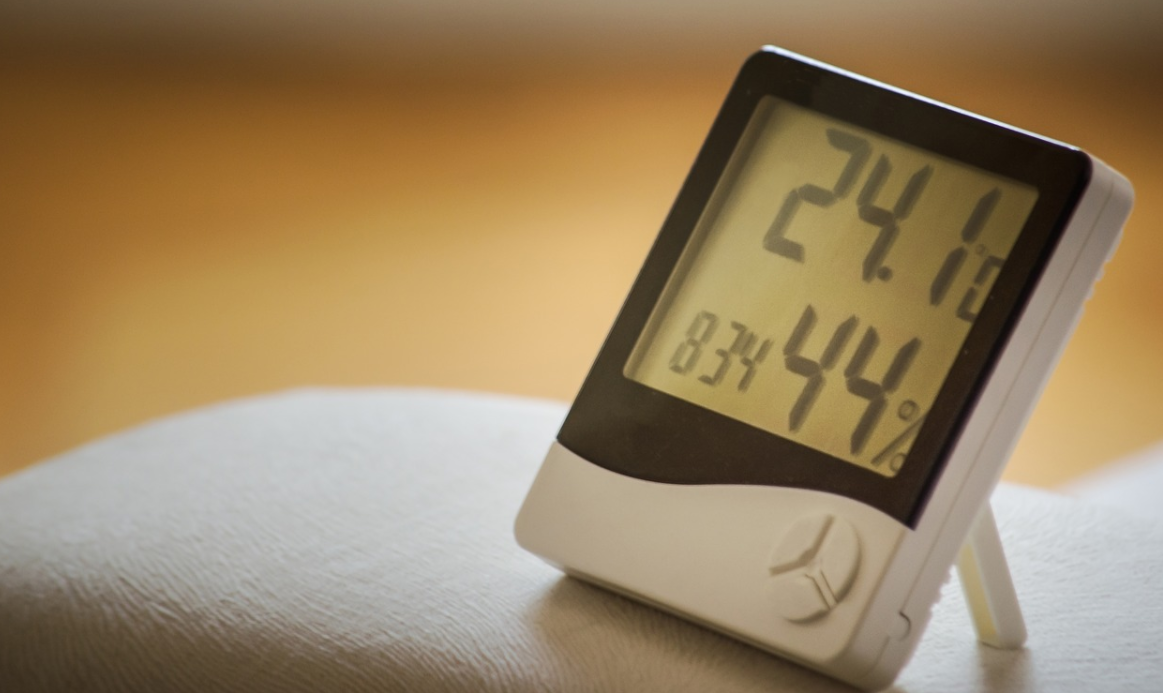 An environmental sensor (known as a hygrometer), whose screen displays the following data: the temperature, the time, and the percentage of humidity in the air.

There is a long list of smart farming sensors, including environmental sensors, which track ubiquitously essential farming parameters (for instance, air quality andâ€”as per the above image of a hygrometerâ€”humidity).

Further examples of sensors for smart farming are covered in the next subsections.

According to Dr John Fulton from Ohio State University, the trend for the application of GNSS in agriculture is already going towards decimetre and centimetre-level accuracy. This includes applications in tractor machine control, space maintenance in adjacent passes, and strip-till planting. (In the event of the improbable, but not impossible, failure of GPS, quantum navigation technologies are a possible alternative sensing technology.)

Combining a transducer with a biological element in biological (bio) sensors is of growing interest to smart farming. This is especially due to the progress being made in research areas such as nanobiosensors, miniaturisation technologies, and microfluidics. An example is the use of chemical and gas analysers to monitor gases such as oxygen, carbon dioxide, and ethylene that affect harvest ripening, storage, and transportation.

Inertial sensors use dead reckoning: a method used to identify the position and the orientation of an object in the environment. The inertial sensors include magnetometers, gyroscopes, and accelerometers, all of which can be (and often are) combined to accumulate multiple positional information parameters. Inertial sensors are used in precision farming.

By measuring the time that it takes for ultra waves to travel both away from and towards distant objects, ultrasonic sensors provide data that can inform the visibility of moving equipment. Such sensors can be mounted on agricultural equipment (such as sprayers and forestry harvesters) to monitor their fuel and fluid levels. 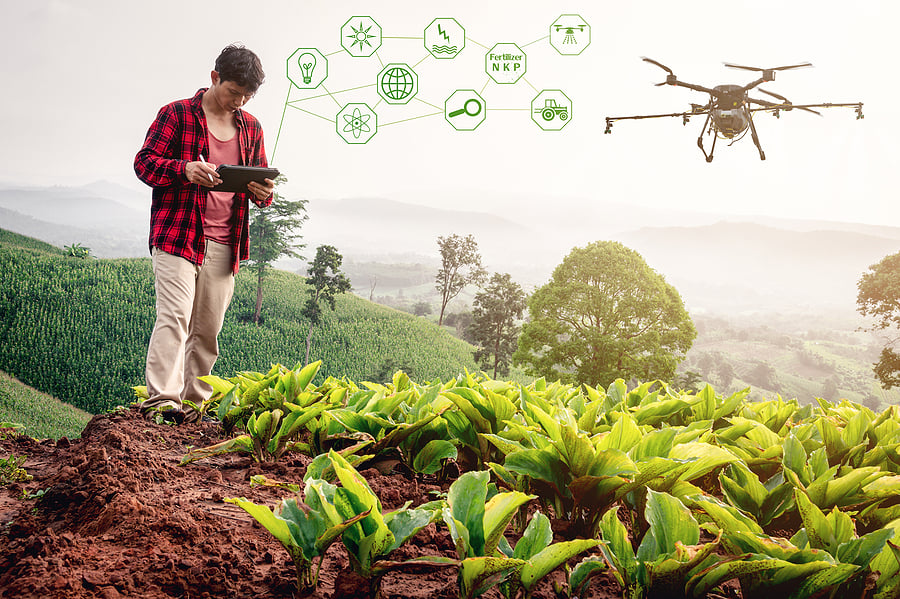 A farmer uses his tablet to observe the smart farming data (represented by graphics related to precision agriculture) that is gathered from a drone flying over crops.

Autonomous and Smart: The Winning Duo

Using IoT-based sensors to achieve betterâ€”and smarterâ€”farming is one of the more viable ways to optimise robotics systems for precision agriculture. And while engineers and manufacturers may still have a long way to go before achieving widespread autonomous cars, if you consider the simplest autonomous agricultural machines from the middle of the 20th century, smart robots have in fact been used in large-scale farming for decades. And on top of this, the use of driverless tractors is making significant progress as of late.

One of the best possible outcomes of smart farming is to provide a solution to food challenges (particularly food shortages). Ultimately, perhaps the industryâ€™s interests in a holistic, IoT sensor-based agricultural ecosystem will need to be galvanised if we are to use smart farming in a genuinely smart way.