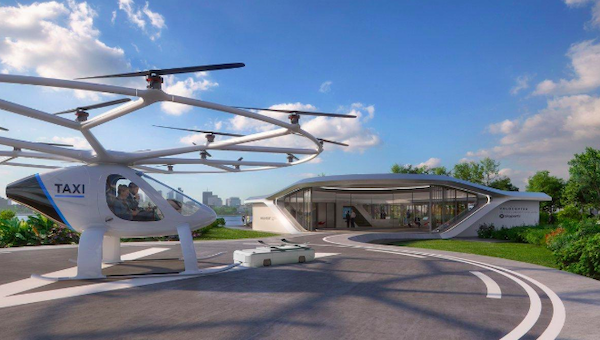 Volocopter's 2X air taxi is now the first electric vertical take-off and landing (eVTOL) vehicle to fly at an airport. What could this mean for autonomous aircraft?

Performed at Helsinki International Airport earlier this month, the Volocopter performed its milestone flight in a demonstration that took place in the same airspace as live commercial passenger aircraft. The Volocopter was fully integrated with traditional air traffic control and management systems at the time, as well as with air traffic systems designed especially for manually controlled aircraft.

The flight was intended to demonstrate that air traffic management and control systems can operate in tandem with one another, even in situations when other sky traffic is present.

The Volocopter 2X is a German two-seat multirotor electric helicopter. It had its first flight on November 17, 2013, however, it was not unveiled publicly until 2017 at the AERO Friedrichshafen air show.

Throughout their test at Helsinki International Airport, Volocopter determined which of the 2X's systems worked with three different providers of air traffic management services for unpiloted craftâ€”AirMap, Unifly, and Altitude Angel.

â€œWe are happy to say that all providers we tested were compatible with the Volocopter systems,â€ said Jan-Hendrik Boelens, Volocopter CTO.

Volocopter 2X will be flying again on September 14, 2019 at an event in Stuttgart. 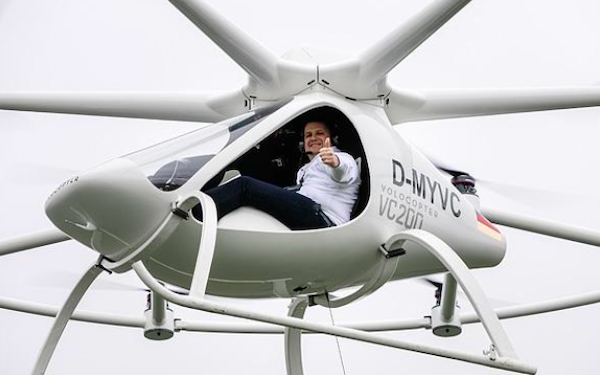 Designed and built in Germany, the Volocopter 2X can fly autonomouslyâ€”without a human pilotâ€”with two passengers on board. This is achieved through the use of 18 fixed pitch individual rotors.

Each propeller has its own three-phase PM synchronous brushless DC electric motor that is mounted on a spoked composite wheel mounted above the cabin. These motors are powered by nine independent quick-change Li-ion batteries, each one powering two motors. The batteries can be charged in two hours on a normal charge or in 40 minutes on a quick charge.

The Volocopter reportedly has top speeds of 100km/h and has a maximum flight time of 30 minutes.

Leading the Way with Air Taxis

It's not just the 2X that has had people talking; Volocopter was recently in the news with its commercial aircraft taxi, the VoloCity, and the company's next leap forward will be the unveiling of this commercial craft and its take-off and landing facility, VoloPort, in Singapore expected later this year.

VoloCity is Volocopter's fourth-generation eVTOL aircraft and has been designed to meet the stringent safety standards set by the European Aviation Safety Agencyâ€”SC-VTOL Enhancedâ€”alongside consumer feedback and data from previous Volocopter generations and tests.

Volocopter GmbH is a German aircraft manufacturer headquartered in Bruchsal. The company specializes in the development of electric multirotor helicopters in the form of autonomous ready-to-fly craft primarily designed for air taxi use.

The company has come a long way since 2011 when it conducted its first manned eVTOL flight. Volocopter hopes to have air taxis in the sky by 2023.