What Are Memristors and How Are They Useful to Engineers?

What Are Memristors and How Are They Useful to Engineers? 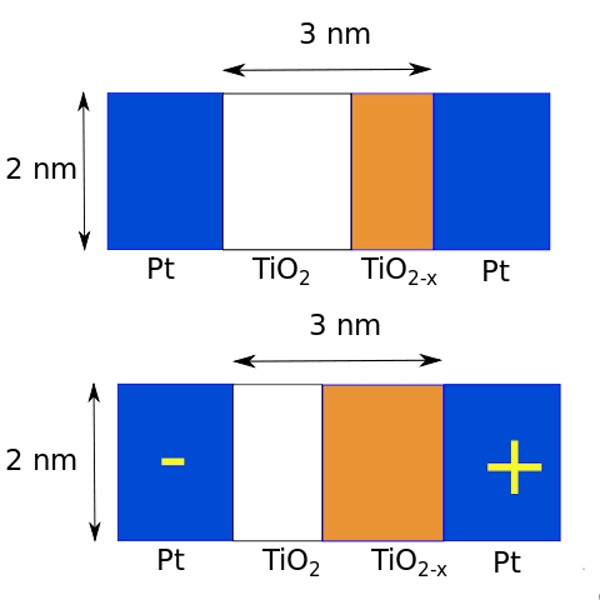 Most electrical engineers and undergraduate students are certainly familiar with the three basic passive components in electric circuits–resistors, inductors, and capacitors.

However, not everyone may be aware that there is a fourth component known as a â€œmemristor.â€ This piece will take you through what memristors are, their principle of operation, and some interesting applications.

Memristors: What Are They?

A memristor (aka â€œmemory resistorâ€) is a passive component capable of limiting or controlling current flow through a circuit and also â€œrememberingâ€ the previous amount of charge that has passed through it. For this reason, memristors are termed non-volatile electronic memory devices. 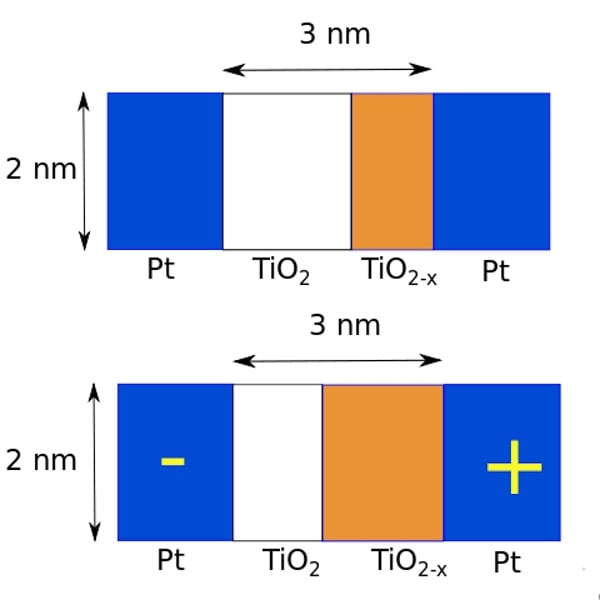 Model of a memristor's internal structure.

History of the Memristor

The idea of â€œmemristanceâ€ was first suggested in 1971 by Leon Chuan, a professor of electrical engineering at the University of California, Berkeley. In a research paper submitted the same year, Chuan noted that there was a symmetry between non-linear resistance, capacitance, and inductance. The â€œconvergenceâ€ of these three properties represents the characteristics of a fourth circuit elementâ€“the memristor. However, it wasnâ€™t until 2008, at HP Labs that the first practical memristor was demonstrated. While analysing a thin film of titanium dioxide (TiO2) sandwiched between two metal electrodes, researchers found that the resistance of the material varied based on the amount of charge it had previously received, even after the power supply was turned off.

How do Memristors Work?

The unique property of a memristor is that its resistance (memristance) is dependent on the voltage level in a circuit, and this value can remain stored for a long time. Thus, memristor resistances can be programmed. Like standard resistance, memristance is measured in Ohms.

Each memristor consists of a thin film of titanium dioxide (the resistive element) sandwiched between two platinum electrodes. The film is divided into two layersâ€“an upper layer consisting of TiO2 with positively-charged dopants and a lower layer of pure TiO2. When a positive voltage is applied across the electrodes, the resistance drops and the memristor enters into a conducting state. However, even after the voltage is removed, the memristor remains in that state, until a reverse-bias voltage is applied across which increases the resistance, thereby reducing the conductivity.

Memristors or memristic elements are promising components useful in many applications on a nanoscale. Examples include:

Due to their ability to store previous resistive states, memristors are viable non-volatile random-access memories (NVRAM) for computers, industrial automation systems, consumer electronics and more. Here, bits of information are stored as memristor states based on resistance values. To program the memristor, a DC voltage is passed to drive the memristor to its extreme resistances (RON and ROFF) which corresponds to ON/OFF memory states. However, AC signals are used to read the stored data to avoid corrupting it. This type of memory architecture uses a crossbar latch which was introduced by HP in 2001.

Crossbar latches are a mesh of conductive traces having a memristor placed at each intersection. Since crossbar latches and memristors are much smaller than transistors, they are very promising components for building more powerful chips than the transistor-based ones we have today. Unlike dynamic random-access memory (DRAM) and synchronous dynamic random-access memory (SDRAM), memristor-based memory devices use negligible amounts of power. IBM, HP, and Intel are leading manufacturers that have utilised memristors in memory and computing devices.

The electrical symbol of a memristor.

Memristors have been identified as viable components for augmenting or potentially replacing transistors in integrated circuits (ICs). They can both store and process data simultaneously at high speeds. Unlike transistors, memristors are impervious to radiation that can affect the reliability of chips. Moreover, crossbar latch technology is a relatively simpler and cost-effective technique for building ICs than wafer-scale architectures.

Today, leading chipmakers and researchers are exploring the viability of using memristors to build neuromorphic (brain-like) systems for artificial intelligence (AI) with low power consumption. A study published in Advanced Intelligence Systems in January 2020 has suggested that memristors can mimic the â€œswitchingâ€ characteristics of synapses in the human brain.

Many decades after their initial development, memristors remain promising components for next-generation chips, memory devices, and AI applications, particularly as Mooreâ€™s law comes to an end. Experts predict an increase in nanoscale memristor applications in the future.

Besides titanium, researchers have observed â€œmemristiveâ€ tendencies in materials such as carbon, amorphous silicon, polymer composite materials, and even organic molecules. Memristors and memristor-based circuits are viable for designing built-in security circuits for the internet of things (IoT) applications and non-volatile logics (nvLogics) for computer processors.