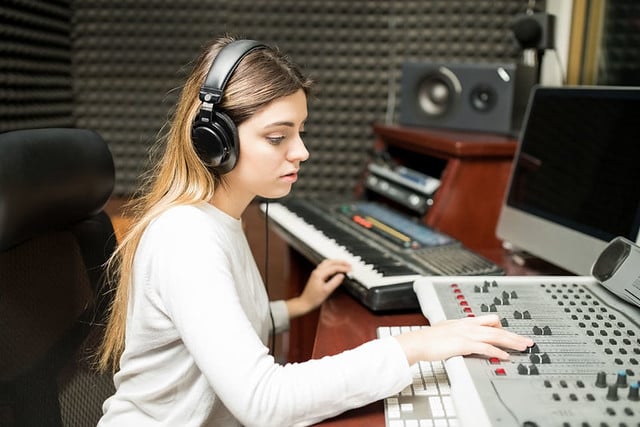 June 23rd, 2019, marked the fifth anniversary of the International Women in Engineering Day. The campaign, which celebrates the outstanding achievements of female engineers around the world, was first launched in the UK in 2014 by the Women’s Engineering Society to celebrate their 95th anniversary.

Since then, the campaign has grown significantly and it received a United Nations Educational, Scientific and Cultural Organization, aka UNESCO patronage in 2016.

To celebrate the successes of female engineers across the world, but also to acknowledge their struggles in a traditionally male-dominated field, Electronics Point has spoken to three of them. Below is a breakdown of their views and ideas of what it's like to be a female engineer today. 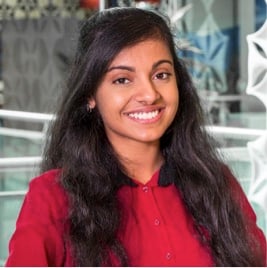 Sarah Solomon, 21, an Electrical and Electronic Engineering Masters student at the University of Sussex.

The representation of women in engineering in academia has been growing for decades, but it is still far from 50%.

Data from the Engineering UK report 2018 shows that only 25.4% of girls aged 16 to 18 would consider a career in engineering compared to 51.9% of boys. Also, the percentage of female students starting A-Level Physics in 2018 was just 22.2%.

However, from the perspective of someone who is currently studying engineering, the overall environment and mentality about women in engineering appear to be improving in academia.

Sarah Solomon, 21, is an Electrical and Electronic Engineering Masters student at the University of Sussex.

She shared with Electronics Point that she has been selected by a leading aerospace and defence company, Thales UK, for a project under the Engineering Education Scheme.

â€œI represented Thales UK at the Big Bang Fair (STEM event), where I had a number of young girls come up to me and show interest in engineering," Solomon explains.

â€œThis gives me hope that over time more women will get into engineering and the ratio of male and female engineers will be better balanced.â€ 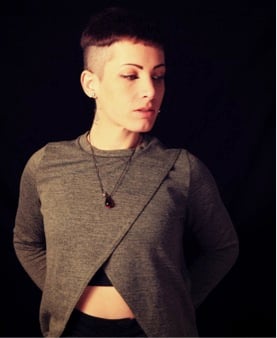 According to data from WES, in 2017 15.1% of engineering undergraduates in the UK in 2017 were women, but only 11% went on to become engineers in the professional world. However, the same data shows a positive increase from nine per cent in 2015.

Sara Fedi is a live sound engineer coming from a small town in Italy.

With a classical music background, she relocated to London in 2014 to study at the Institute of Contemporary Music Performance (ICMP).

â€œWhile I was studying at the ICMP I had a chance to learn more about music production and I fell in love with itâ€, Fedi told Electronics Point. â€œThe idea of being independent and being able to manipulate sound and create something new, I guess thatâ€™s what attracted me the most.â€

Fedi finished her course while, in the meantime, playing bass in her current band, Electric Enemy. She spoke about the difficulties of finding work in a recording studio.

â€œI contacted few studios asking them if they might have needed a runner, I tried to find a course that I could have afforded without putting a second loan on my shoulders but without much success.â€

Fedi eventually found a short course organised by Ben Etchell at LiveSoundTraining.co.uk, and through that, she started her live sound engineering journey.

â€œI think that the most awkward moments have been with band members when they first walk in for the soundcheck, they usually see me on stage setting up, and for a couple of minutes they just look around completely lost.â€

However, Fedi added, there has always been a conflict between musicians and the sound guy in live sound. â€œSo no, I donâ€™t feel particularly discriminatedâ€, she said.

Fedi also adds there many projects to empower women in this specific field, for example, NormalNotNovelty organised by Brendon Harding. 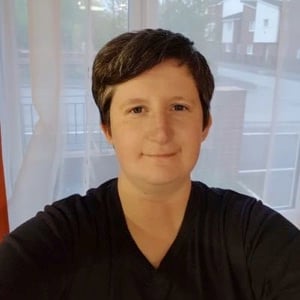 Luce Carter is a software engineer from Manchester.

As mentioned in a previous EP article, only 13% of engineers worldwide are women. The piece addresses the causes of this gender gap and how it can be narrowed. But how does it actually feel to be a woman in a traditionally male-dominated field? Luce Carter is a software engineer from Manchester, UK.

Carter, who has recently received a Microsoft Most Valuable Professional (MVP) award, tells Electronics Point that the gap is indeed narrowing, not just in terms of the gender identity of engineers but also attitudes.

â€œSadly, you do still hear and see stories of sexist behaviour towards non-male identifying people in engineering, as with other professions, but it is reducing," she explained.

Carter added that, particularly in Manchester, the technology community is very active and contains a very diverse number of people.

â€œIn fact, we have a whole organisation here dedicated to arranging events, especially hackathons for young people, including one solely for young women ages 11 to18. Two of the key figures involved are women so Manchester is definitely an excellent example of how diversity can be done well.â€

When asked what her most empowering experience as a female engineer was, Carter mentioned one of the all-female youth hackathons she participated in.

â€œIt was full of promising young people who were eager to learn. Many came in lacking in confidence and by the end of the weekend were standing up and demoing to a room full of people! It was incredible to see that they weren't letting years of being told that 'engineering is a man's industry' put them off having a goâ€”and actually they really enjoyed themselves. I heard more than one 'woop' over the weekend as they discovered new things.â€ 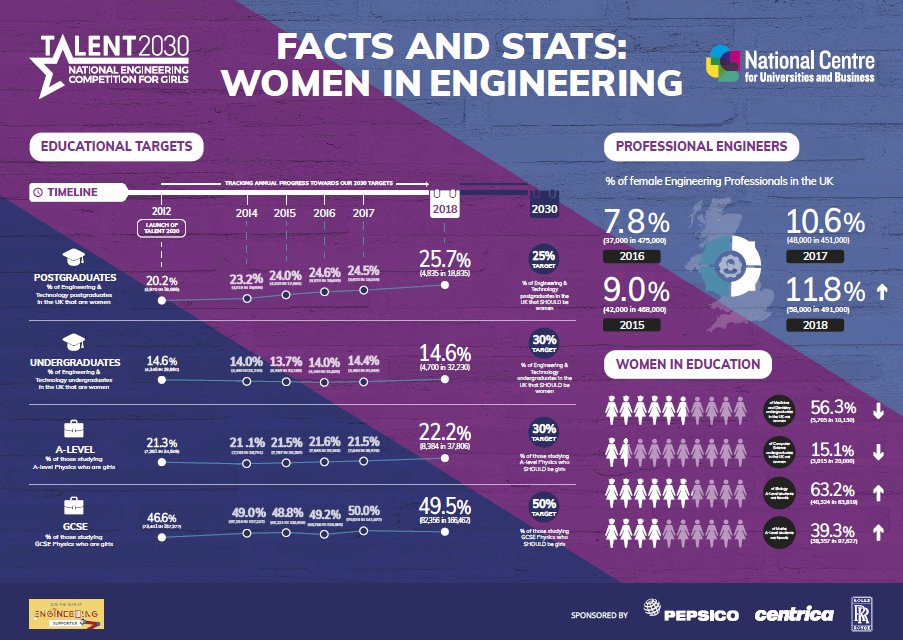 An infographic that shows the progress of the Talent 2030 Dashboard (links to corresponding press release and hi-res PDF). Image courtesy of the National Centre for Universities and Business.

The Future of Women in Engineering

As demonstrated throughout this piece, most figures regarding women engineers are still far from matching their male counterparts, but the academic and working environment related to this issue is slowly but surely improving.

While being a female engineer today is surely a better experience than it might have been 10 or 20 years ago, countries and institutions must not stop evolving in order to reach a freer world where girls will want to take on an engineering career just as much as boys.