What Powers the Falcon 9 Reusable Rocket? A Peek Into Its Control and Electrical Systems

What Powers the Falcon 9 Reusable Rocket? A Peek Into Its Control and Electrical Systems 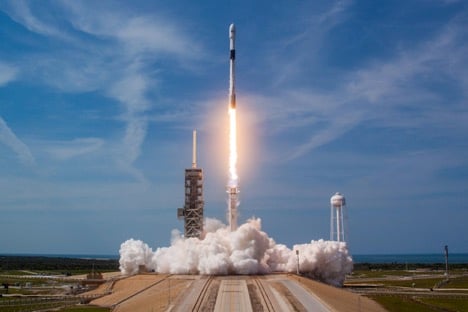 The Falcon 9 range of rockets represents a breakthrough in modern space technology by making space travel more affordable without compromising on safety and reliability.

About the Falcon 9 Spacecraft

The Falcon 9 is a two-stage rocket designed and manufactured by SpaceX, Americaâ€™s foremost aerospace and space transport organisation founded by Tesla owner, Elon Musk. SpaceX regularly uses the rocket to carry customer payloads and human passengers into space, and new, cutting-edge technology to the International Space Station (ISS) for orbit.

Since its introduction, the Falcon project has rivalled other space programs from leading agencies such as the European Space Agency, Russian Space Agency, and the Chinese National Space Administration.

According to Musk, the Falcon 9 was borne out of a vision to develop a fully reusable rocket that would significantly reduce the costs of transporting humans and technology into space, as well as exploring the possibility of human colonisation of Earth-like planets such as Mars.

However, the vehicle has had its share of problemsâ€”several failed launches and landings where SpaceX had its engineering team look things over and make modifications. Most notably was the explosion of Falcon 9 v1.1 in 2015 shortly after liftoff which SpaceX traced to a failed composite overwrapped pressure vessel (COPV), and the first ever failed landing recovery of the Block 5 first stage booster in December 2018 due to a stalled hydraulic pump.

The rocket has recorded many successful firsts as well, with the first stage recovered intact in 2015 at Cape Canaveral Air Force station. Falcon 9 had another successful space flight and booster landing on the "Of Course I Still Love You" barge off the Atlantic coast of Florida.

Letâ€™s breakdown the various control systems and electronics that go into the Falcon 9â€™s successful functions and, sometimes, causes of dysfunction.

The Falcon 9 is a two-stage vehicle propelled by liquid oxygen (LOX) and rocket-grade kerosene (RP-1). Both stages of the Falcon 9 rocket are driven by Merlin engines. Merlin engines are reaction engines which obtain thrust based on Newtonâ€™s Third Lawâ€”action and reaction are equal and oppositeâ€”to launch into space and perform a successful landing back on Earth.

The Falcon 9 uses a total of 10 Merlin engines: nine in the first stage and one in the second stage. At liftoff, the total thrust offered by all 10 engines is just over 1.1 million pounds in force (lbf). For greater engine restart reliability, the engines utilise dual redundant pyrophoric igniters (TEAâ€TEB).

Unlike the Falcon 1 model which used just one Kestrel engine in its first stage, Falcon 9 uses nine large Merlin engines to ensures the reliability of the propulsion system in the worst-case scenarios.

Inside the Falcon 9 live an array of onboard avionics, guidance systems, navigation/controls, and termination systems that ensure safety and reliability of the two-stage orbit.

Navigation & Guidance Systemsâ€”Falcon 9â€™s navigation/guidance systems use modified versions of algorithms brought over from earlier models like the Falcon 1. The guidance system adjusts the target trajectory accordingly as capsules separate from one other during first stage burn.

Electrical Power Supplyâ€”Falcon 9 uses integrated solar arrays in Dragon v2 which wrap around the trunk for improved aerodynamics. The electrical power supply in the launch can vary depending on requirements by a payload provider who is also responsible for supplying the necessary cabling to interface ground support equipment with payload processing room power. Typical power values in this section are 110V AC and 208V AC (grounding per MILâ€STD 1542).

Radio Frequency Systemsâ€”The Stage 1 launch vehicle transmits RF signals in the S-band at a 2221.5 MHz using PCM/FM modulation with data rates at 1.8 Mbps and power output of 10W. Stage 2 uses the same configuration as the Stage 1 but uses a frequency of 2231.5 power output of 20W.

Radar Transponderâ€”Falcon 9 utilises two C-band transponders with receivers operating at frequencies of 5690 and 5690 MHz, pulse modulation with data rates at 2000 and 3000 pps and maximum power output of 400W.

The Falcon 9 rocket represents a huge leap in modern space exploration and is a testament to the ingenuity of American engineering.

However, it is still undergoing rigorous testing and modifications to perfect its reusability. SpaceX CEO Elon Musk says the rocket can be reused up to 100 times with minimal refurbishment, although experts consider 10 reuses a more realistic number.

Nonetheless, the Falcon 9 can economically transport both humans and technology into space. Subsequent models of this rocket will have thousands of checks aimed at enhancing rocket reliability and further drive the companyâ€™s vision of making commercial space travel a reality.

For more on SpaceX, read up on EP's News piece, 'SpaceXâ€™s Crew Dragon Craft Launches Successfully and Autonomously Docks Itself with the ISS in a World First'.