How to Create a Low Power DC/DC Converter

How to Create a Low Power DC/DC Converter 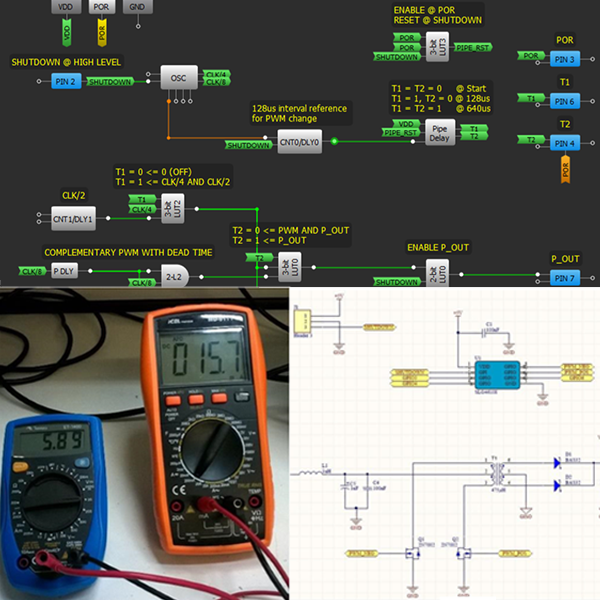 This project presents a low cost and low power DC/DC push-pull converter based on the GreenPAK SLG46108 device.

Galvanically isolated interfaces are a common requirement within industrial devices for safety reasons. In this type of application, a digital isolator is used to galvanically isolate an MCU from a communication transceiver or an ADC.

This project will present a low cost and low power DC/DC push-pull converter based on the GreenPAKâ„¢ SLG46108 device. The following sections will show how to:

The complete design file can be found here. It was created in the GreenPAK Designer software (a part of the Go Configureâ„¢ Software Hub).

A push-pull converter schematic topology is shown in Figure 1. This converter uses a transformer with center-tap in the primary and secondary windings. Two transistors (Q1 and Q2) work to switch the DC input voltage VIN in alternate half-cycles.

The current flows in the same direction in the output capacitor during both current cycles, keeping a positive output voltage VOUT. The converter output voltage could be given by equation (1): VOUT = 2 * D * VP * n - VDIODE

An important aspect for push pull converters is the need for a short time interval where both commands are low, as can be seen in Figure 2. This time interval is required to avoid the short circuit of both primary ends of the transformer. 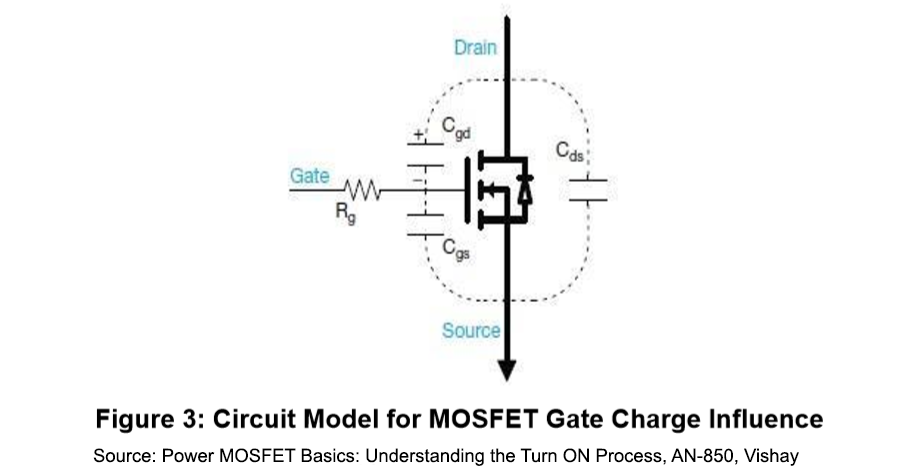 In datasheets the turn-on and turn-off transitions are presented as shown in Figure 4. However, the switching times are highly affected by circuit conditions, such as gate drive resistance, drain-source voltage, etc. 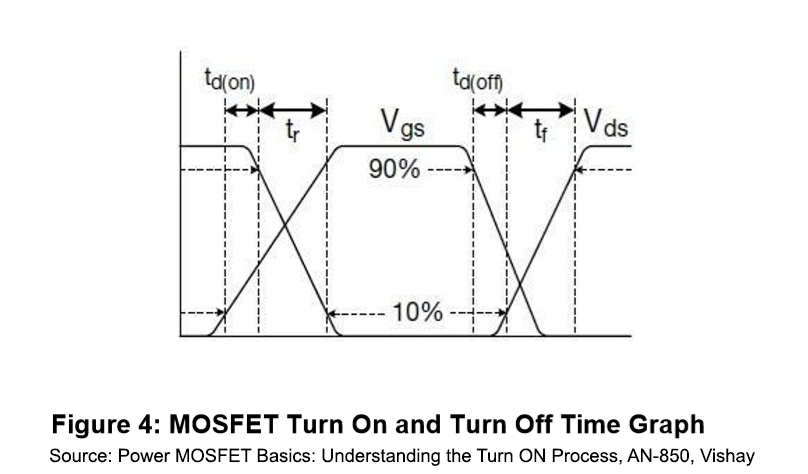 2. Board Schematic and Layout

Figure 5 depicts the board schematic of a low power converter module using the SLG46108. The module has an input DC voltage of 5 Volts (J1 connector) and an isolated output with more than 5 Volts. Output voltage (J2 connector) is higher than 5 V to enable the operation of a linear regulator. 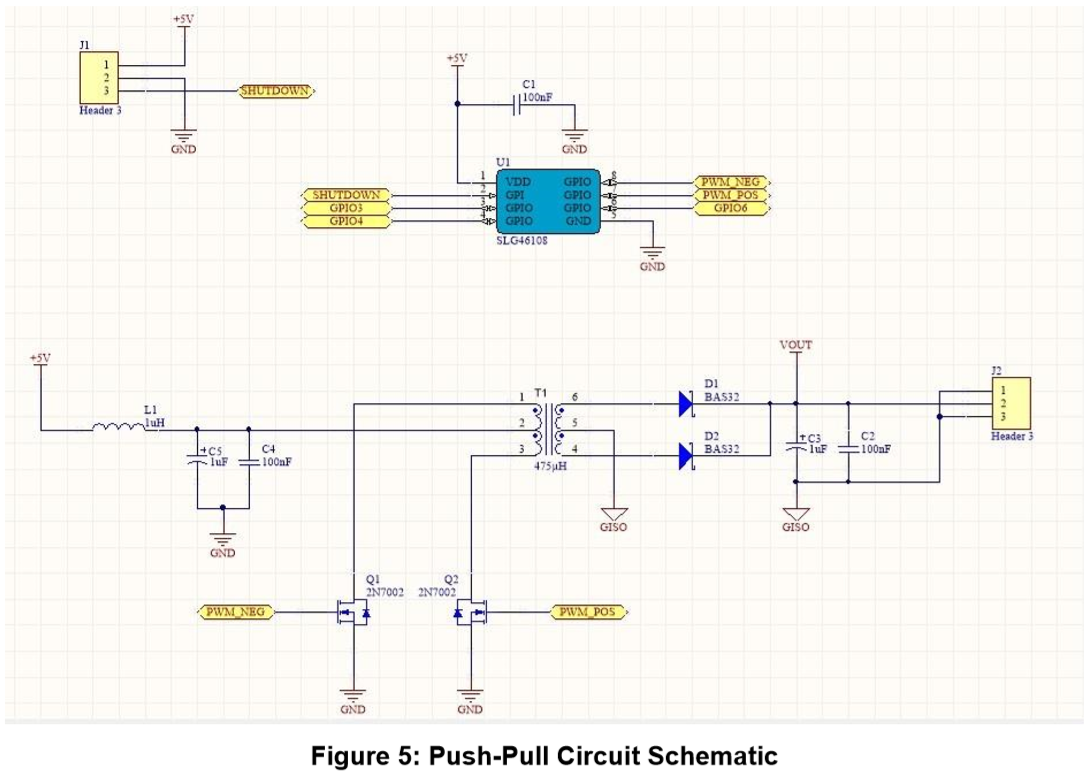 The switching dead time interval is defined to generate a duty cycle of 45 %, considering a switching frequency of 250 kHz. This approach enables the use of different transistors with the developed controller. The drawback is the reduction in the output voltage and the reduction in efficiency.

The selected transformer is the Wurth Electronic part-number 760390014 that has a turns-ratio of 1:1.3. The output diodes are the part-number BAS32, from Nexperia. For this project we have considered the maximum diode drop-out voltage as 0.7 V. Both transistors are the well-known 2N7002 NMOS.

For this circuit we calculate the expected minimum output voltage, when the diode drop-out voltage is maximum, using equation 1. Then:

The drop-out voltage in transistors is neglected for simplicity, as the load current is low and the MOSFET equivalent resistance is low too. The output voltage must be higher than the calculated minimum voltage, especially at light loads.

Figure 6 shows a picture of the mounted module board:

The project design developed in GreenPAK Designer is shown in Figure 7. 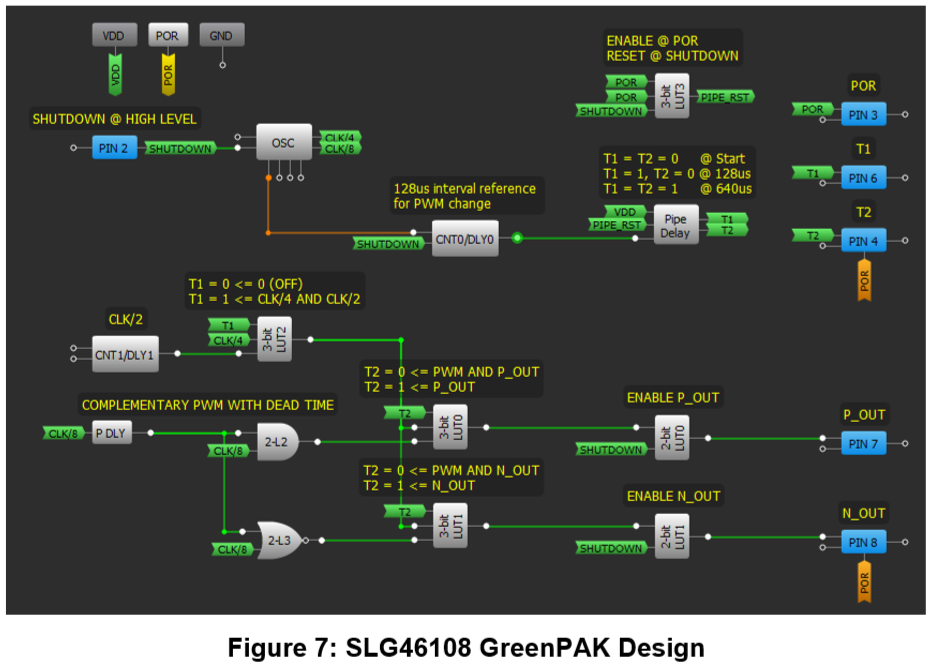 The implemented solution uses a 250 kHz clock signal (CLK/8) from the OSC block as the base PWM signal. The OSC block is configured to a main clock frequency of 2 MHz (CLK) and two of its outputs are used: the clock divided by four (CLK/4) and by eight (CLK/8). The main oscillator clock is sourced to block CNT1/DLY1 to generate a clock divided by two (CLK/2).

This structure generates the complementary PWM signal with the same duty cycle in both outputs and a dead time interval between transitions. Before output signals OUT P and OUT N can drive output pins, the signals should pass through blocks 3bit-LUT0 and 3bit-LUT1.

Blocks 3bit-LUT0 and 3bit-LUT1 are part of the design start-up logic. Start- up sequence logic is required in the converter to avoid high inrush current during initialization. The start-up process has two phases that are controlled by the signals T1 and T2, generated via a Pipe Delay block. The Pipe Delay block starts counting pulses of the CNT0/DLY0 block after block reset. The CNT0/DLY0 block generates a pulse every 128 Âµs. This keeps the T1 and T2 signals LO during the first 128 Âµs of operation.

T1 signal is an input for 3bit-LUT2 block. The LUT2 block sends a PWM signal with a small duty cycle generated by the AND operation of signals CLK/4 and CLK/2 when T1 is high and a continuous LO signal when T1 is low.

The T2 signal is an input for 3bit-LUT0 and 3bit-LUT1 blocks. The T2 signal is used in these blocks to select the duty cycle of the output PWM drive signals. When T2 is LO the signals OUT P and OUT N are ANDed with the signal PWM that comes from block 3bit-LUT2. In this situation the output signals P, from 3-bit LUT0, and N, from 3-bit LUT1, have the same duty cycle of PWM signal. When T2 is HI the output signals P and N are the same as OUT P and OUT N. If T2 and T1 signal are both low, PWM signal is always low and the outputs P and N will be always low too.

This group of blocks enables the control of PWM output signals using T1 and T2. After the initial 128 Âµs LO signal both PWM outputs will have a small duty cycle, until T2 signal rises to high level. A T2 signal rise to high logic level will happen after 640 Âµs of the start operation, or after 512 Âµs after the rising edge of T1 signal.

PIN 8 and PIN 7 are outputs that receive the PWM signals from 2-bit LUT1 and 2-bit-LUT0 respectively, driving the two transistors Q1 and Q2. PINs 6, 4 and 3 are configured as outputs and receive signals T1, T2 and POR respectively. These signals are used for the measurement of startup signals only.

The board module was tested for an input voltage of 5V and the control signals were measured with an oscilloscope.

Figure 8 shows the complementary output PWM when the circuit is in steady state operation. The measured PWM frequency is 252.5 kHz, near to the expected 250 kHz frequency. 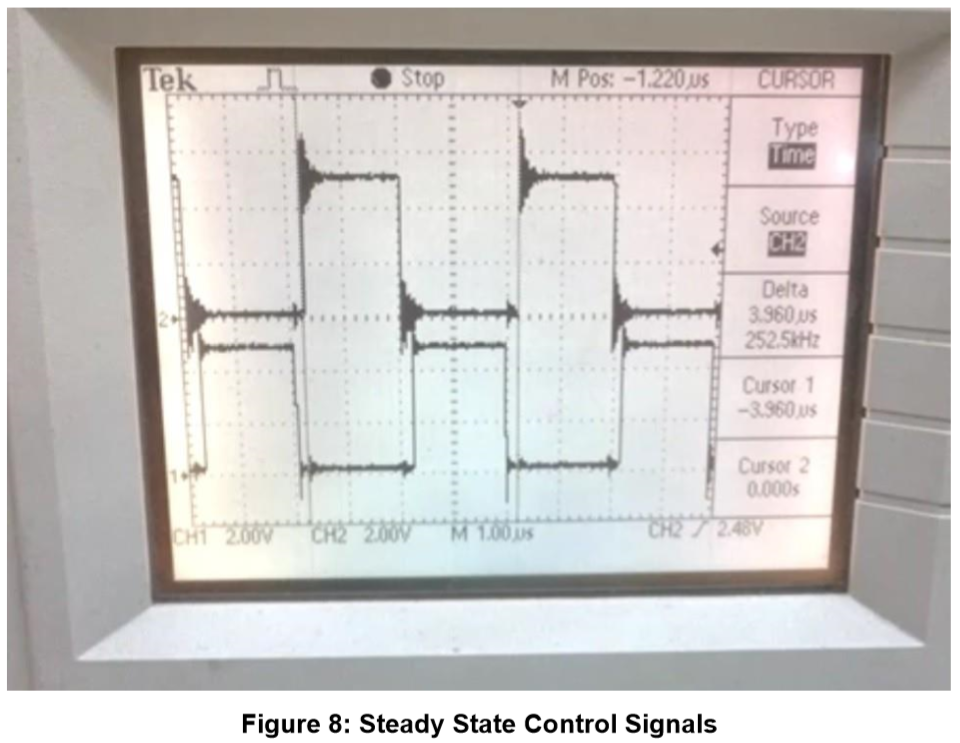 Figure 9 shows the measurement of the circuit dead time interval. The difference between cursor 1 and 2 is about 200 ns, nearly the expected value of 222 ns.

During start-up the control generates a PWM that has a reduced duty cycle. It can be seen in Figure 11. Figure 12 shows the duty cycle change after the rising edge of T2 signal. The transistor On time is measured as 320 ns during the first PWM cycle. 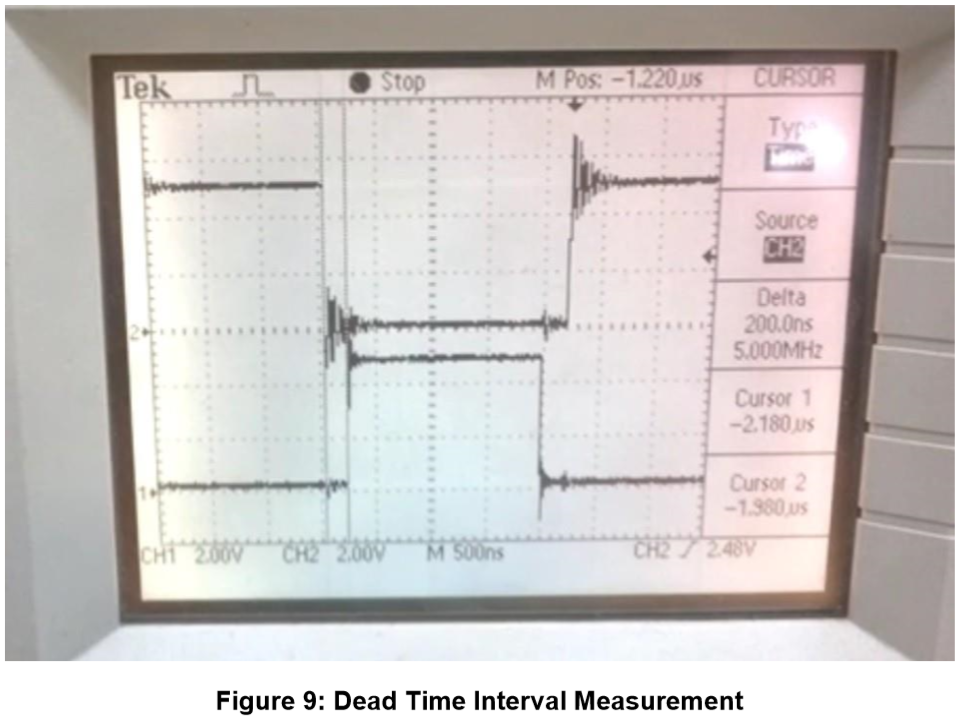 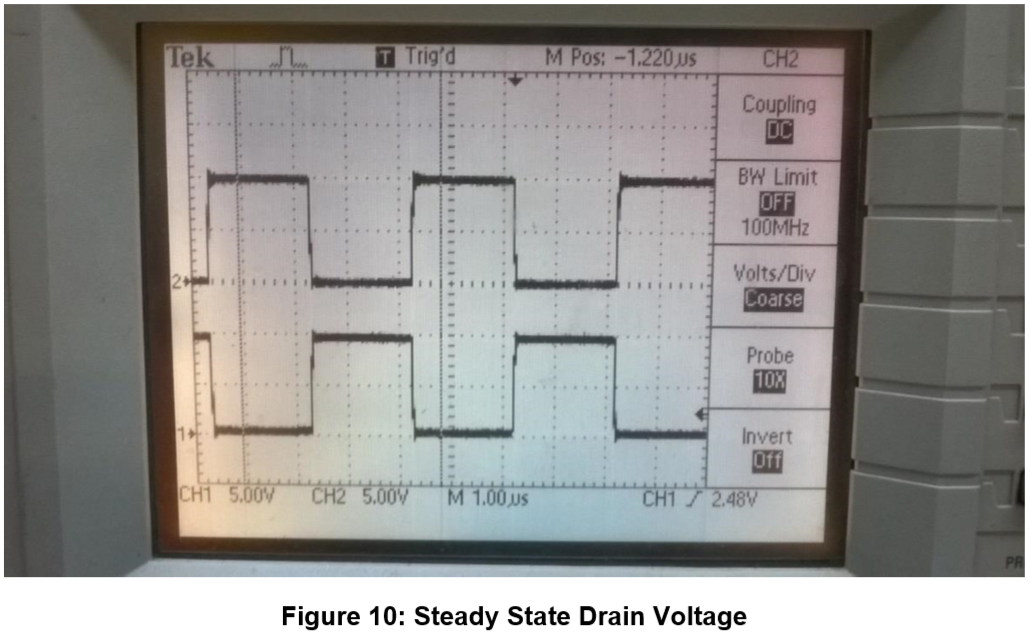 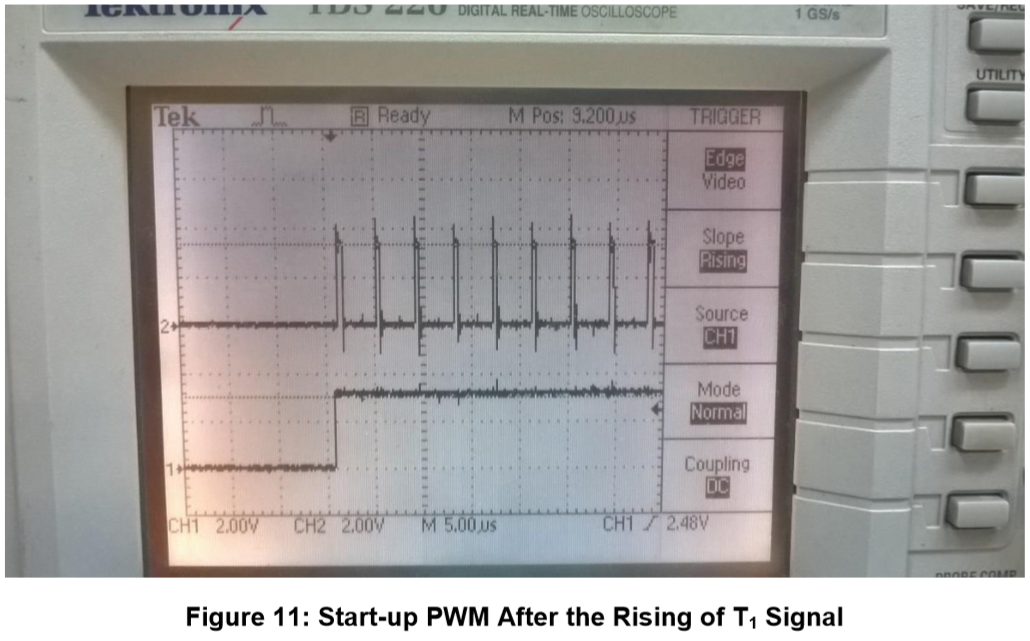 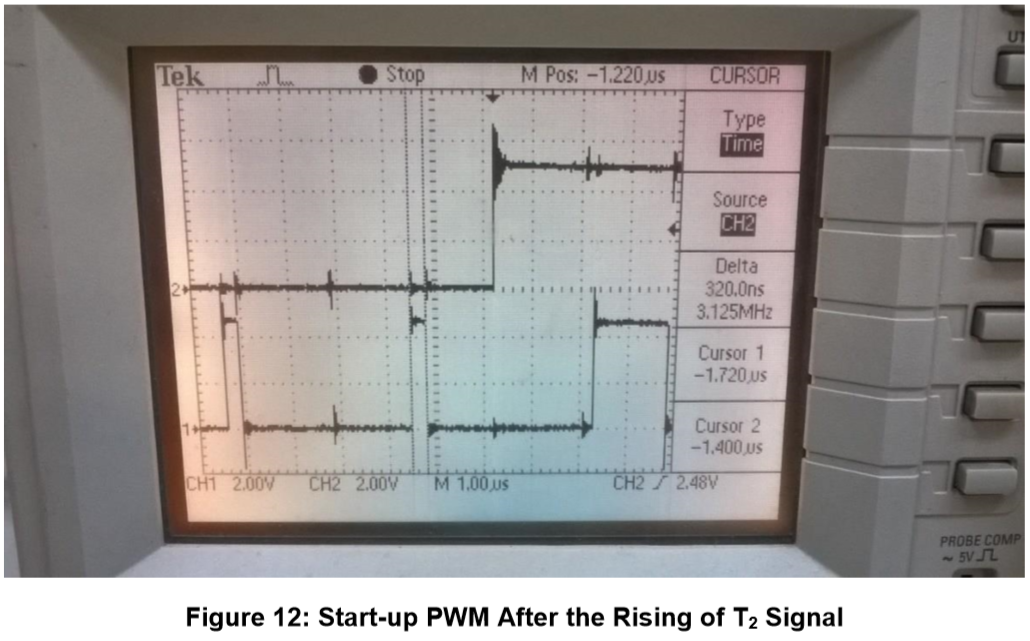 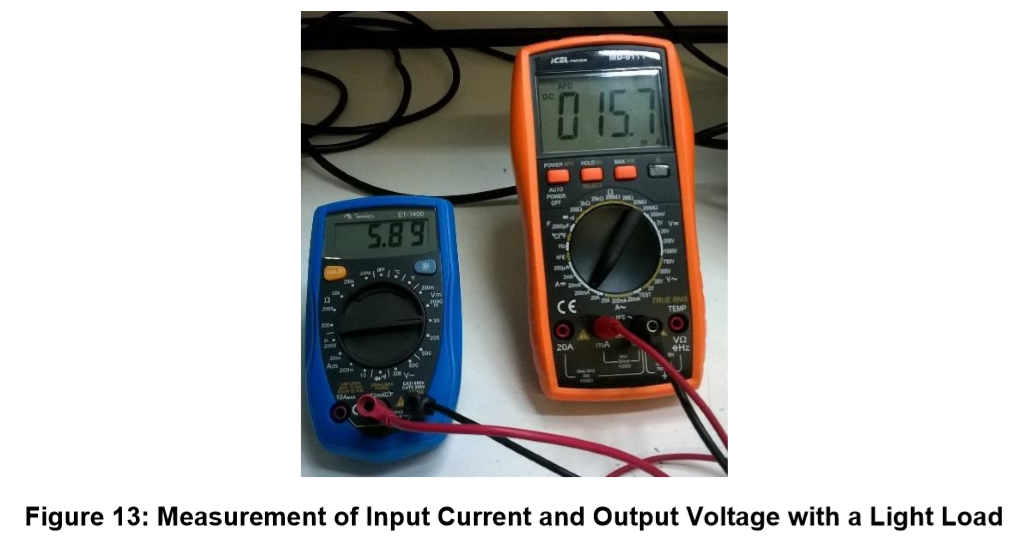 The circuit input current during shutdown was measured too, achieving 5.7 ÂµA of current, as can be seen in Figure 15. The most significant part of shutdown current is from the presence of 1 Mâ„¦ pull-down resistor. 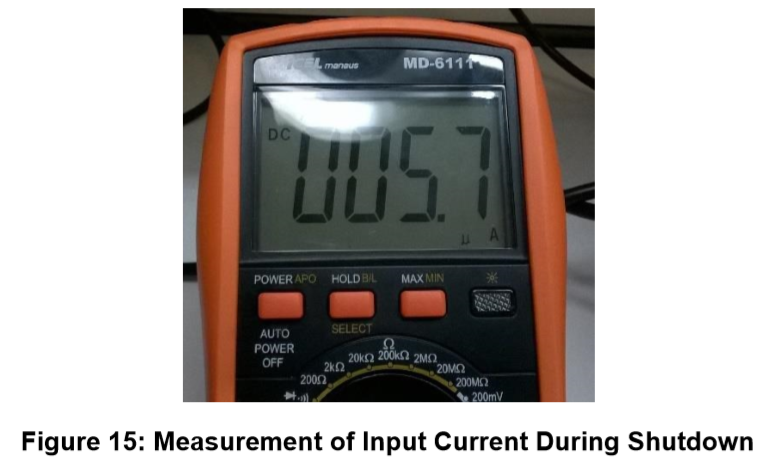 This project presented how to implement a low power and small-factor DC/DC push-pull converter with a GreenPAK IC. The main advantage of GreenPAK over other solutions is the presence of a programmable delay block. This block makes the design of dead time insertion logic really simple. It is interesting to see how it was possible to add a personalized start-up sequence using pipe delay block and the addiction of a shutdown mode control. Although this circuit was designed to operate on supply voltage of 5 Volts, it can also work at a supply voltage of 3 Volts. The only limitation on the supply voltage is the threshold voltage of MOSFETs and maximum IC supply voltage.