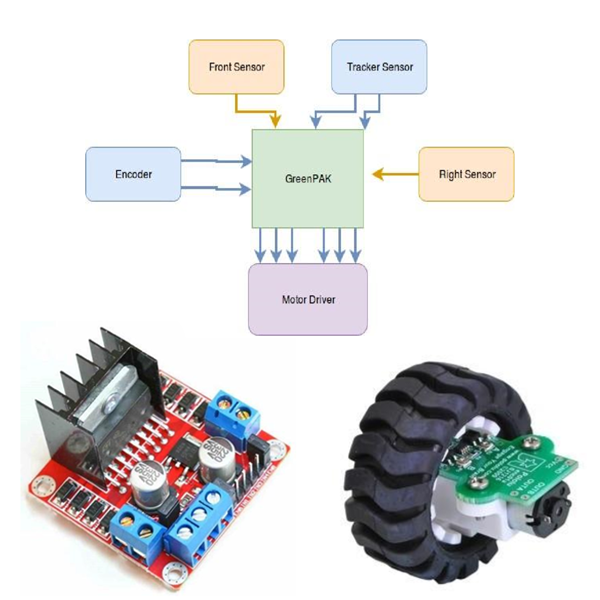 Check out how to interpret data from different sensors and how to design a robot to autonomously solve a maze.

Below we described steps needed to understand how the solution has been programmed to create a maze runner robot. However, if you just want to get the result of programming, download GreenPAKâ„¢ software to view the already completed GreenPAK Design File. Plug the GreenPAK Development Kit to your computer and hit the program to design the solution.

Maze-solving robots originate from the 1970s. Since then, the IEEE has been holding maze-solving competitions called the Micro Mouse Contest. The aim of the contest is to design a robot that finds the midpoint of a maze as quickly as possible. The algorithms used to quickly solve the maze typically fall into three categories; random search, maze mapping, and right or left wall following methods.

We will use the analog distance sensor to determine the distances to the right and front walls. The Sharp distance sensors are a popular choice for many projects that require accurate distance measurements. This IR sensor is more economical than sonar rangefinders, yet it provides much better performance than other IR alternatives. 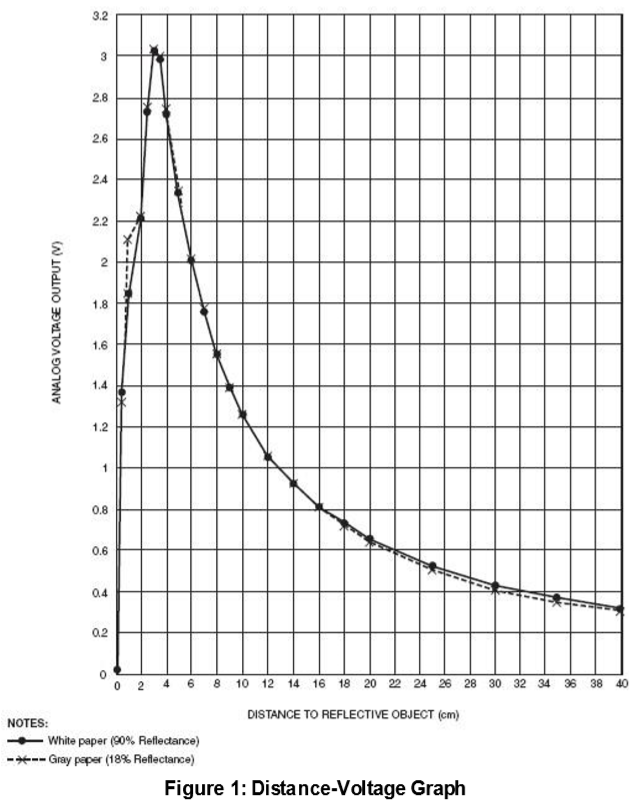 A white line against a black color ground is set as the target. We will use the tracker sensor to detect the white line. The tracker sensor has five analog outputs, and the outputted data is influenced by the distance and the color of the detected object. The detected points with higher infrared reflectance (white) will cause a higher output value, and the lower infrared reflectance (black) will cause a lower output value.

We will use the pololu wheel encoder to calculate the distance the robot travels. This quadrature encoder board is designed to work with pololu micro metal gearmotors. It functions by holding two infrared reflectance sensors inside the hub of a Pololu 42 mm Ã—19 mm wheel and measuring the movement of the twelve teeth along the wheelâ€™s rim. 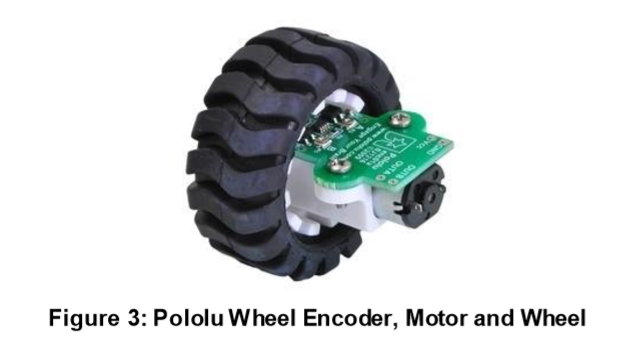 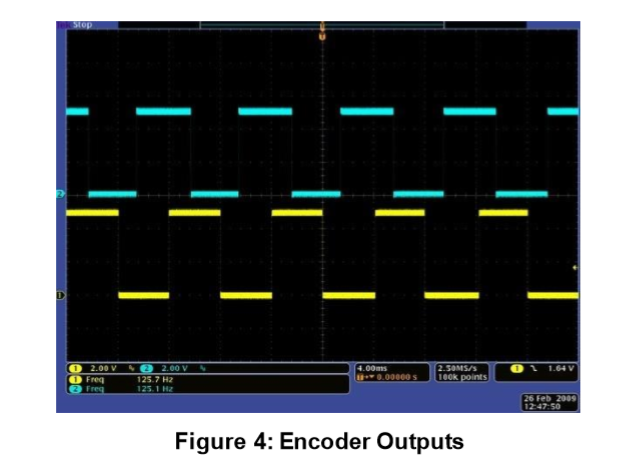 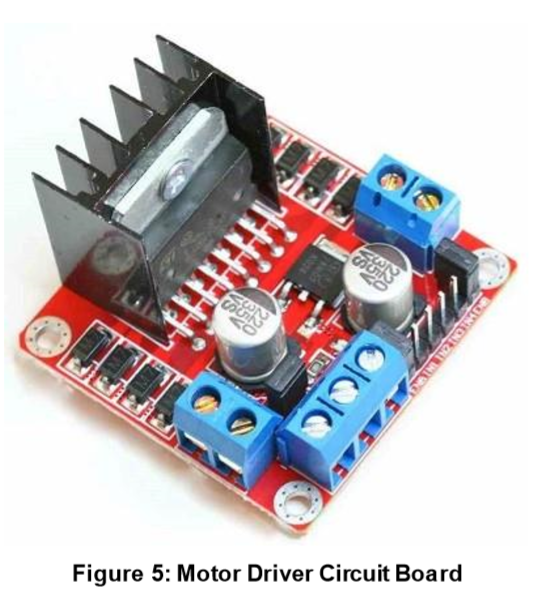 Also, a voltage regulator is used to reduce the voltage from the battery down to 5 V. 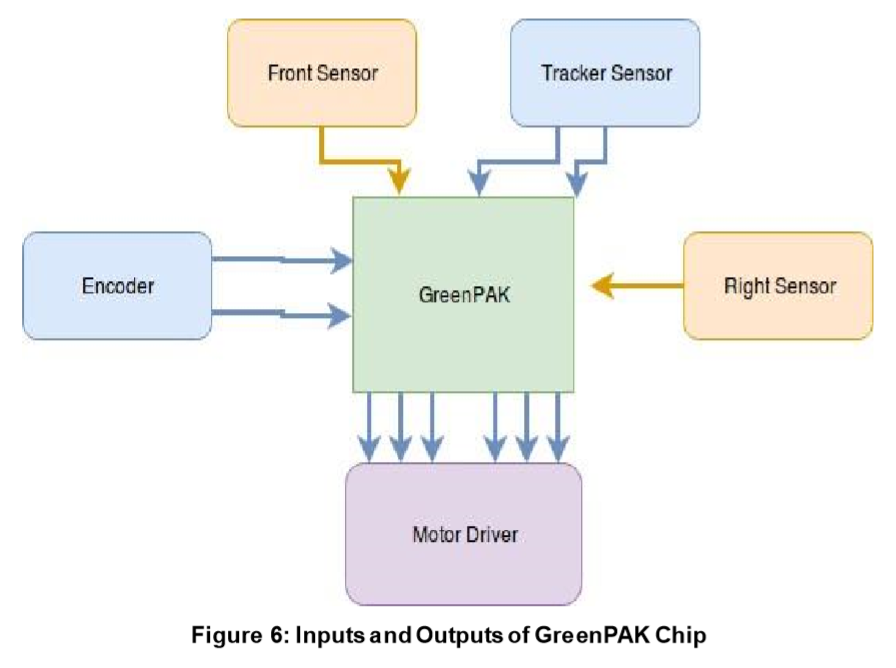 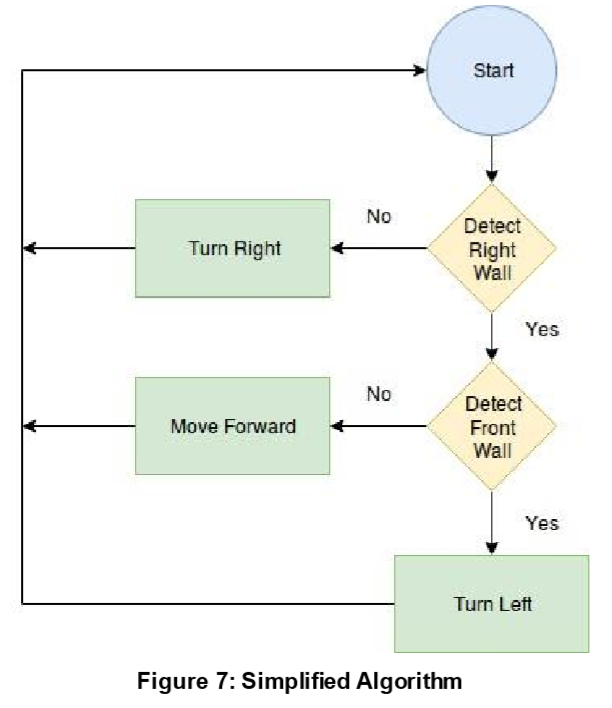 An important note is that there is no wall for reference after the robot has just turned to the right. 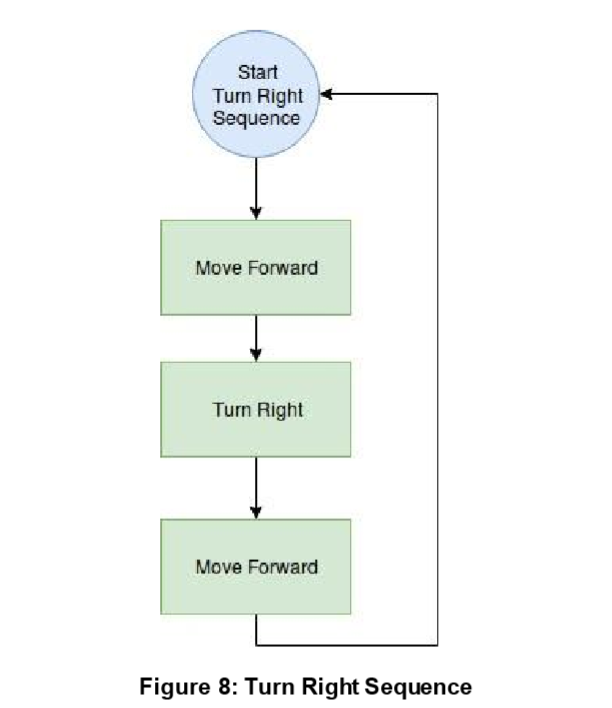 In addition, the robot must keep its distance from the wall when moving forward. This can be done by adjusting one motor to be faster or slower than the other. 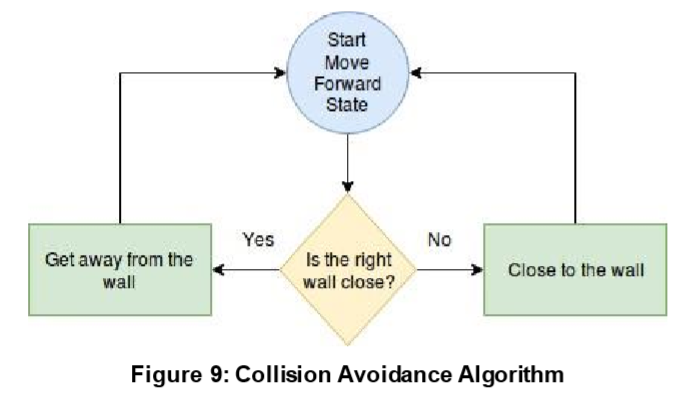 The final state of the flow chart is shown in Figure 10. 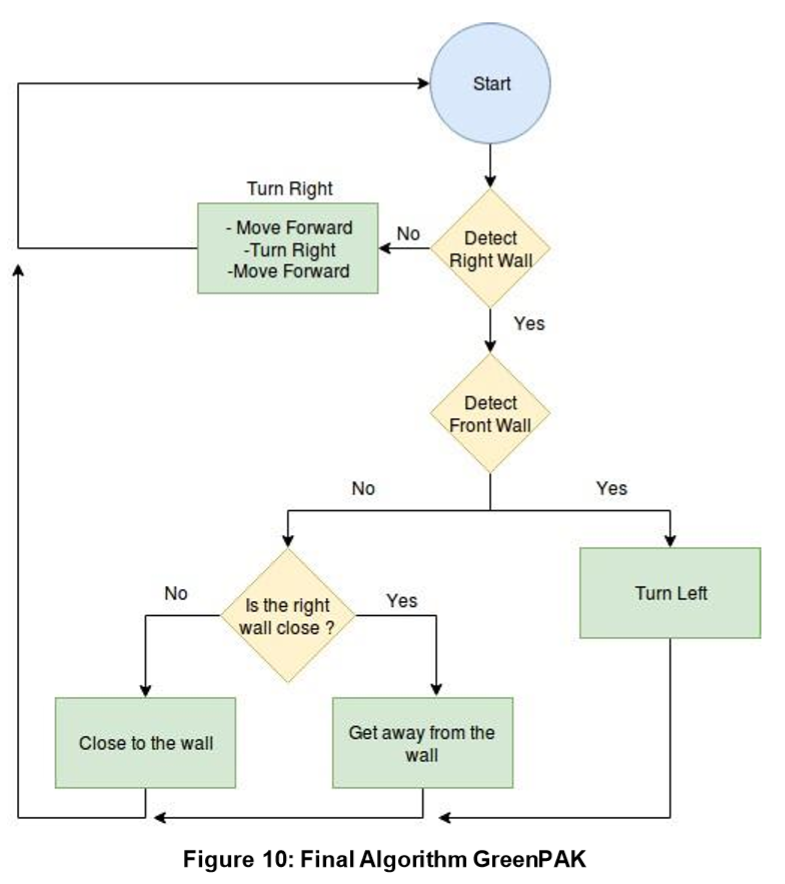 The GreenPAK design consists of two parts. These are:

Since ACMP0 and ACMP1 depend on the same distance sensor, we used the same IN+ source for both comparators. Constant signal change can be prevented by giving ACMP1 25mv of hysteresis. 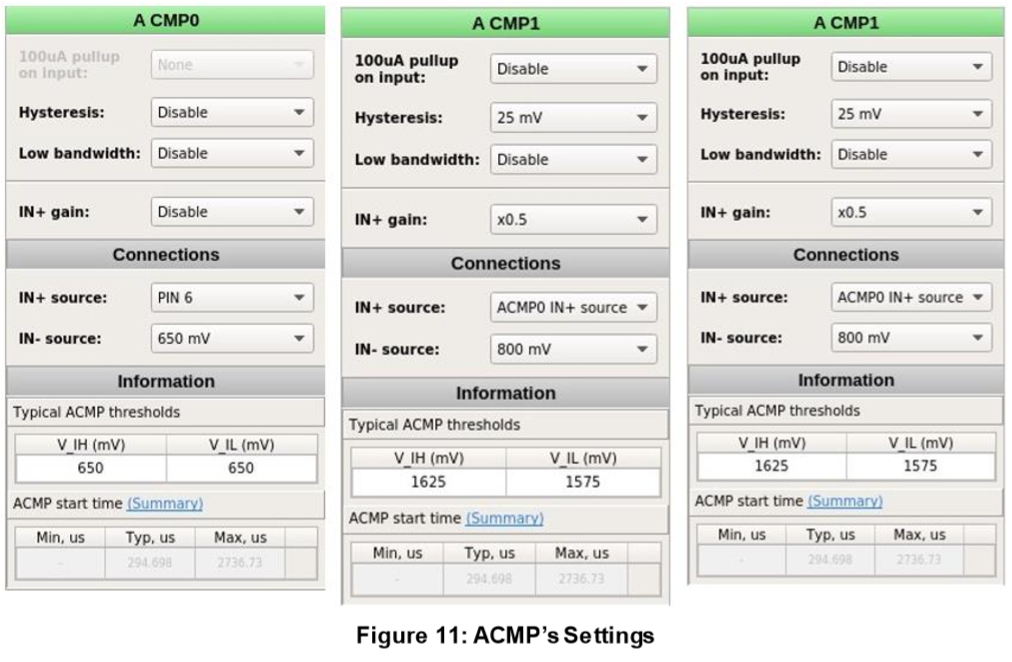 We can determine the direction signals based on the ACMPsâ€™ outputs. The circuit shown in Figure 12 depicts the flow diagram outlined in Figure 7. 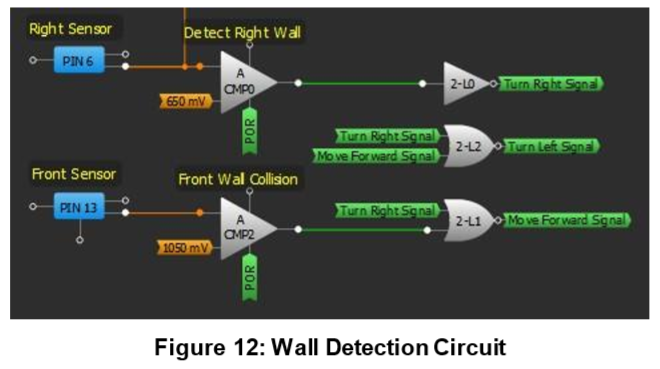 In the same way, the circuit which indicates the position of the robot relative to the right wall is shown in Figure 13. 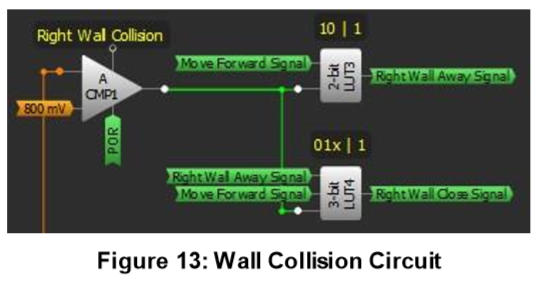 This project utilizes the Asynchronous State Machine, or ASM, to control the robot. There are 8 states in the ASM, and 8 outputs in each state. The Output RAM can be used to adjust these outputs. The states are listed below:

These states determine the output to the motor driver and direct the robot. There are 3 outputs from the GreenPAK for each motor. Two determine the direction of the motor, and the other output determines the speed of the motor. The motor movement according to these outputs is shown in the following tables:

The ASM Output RAM is derived from these tables. It is shown in Figure 14: 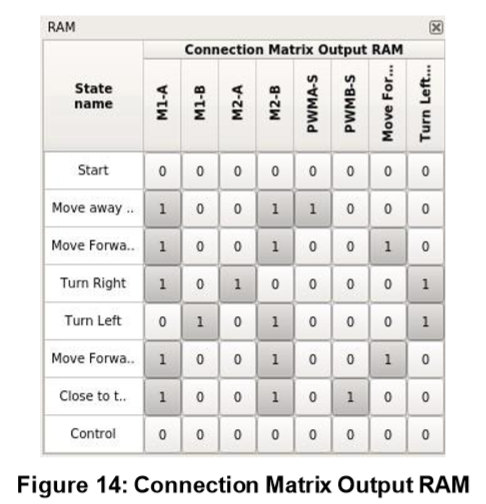 In addition to the motor drivers there are two more outputs. These outputs go to the corresponding delay blocks to allow the robot to travel a certain distance. 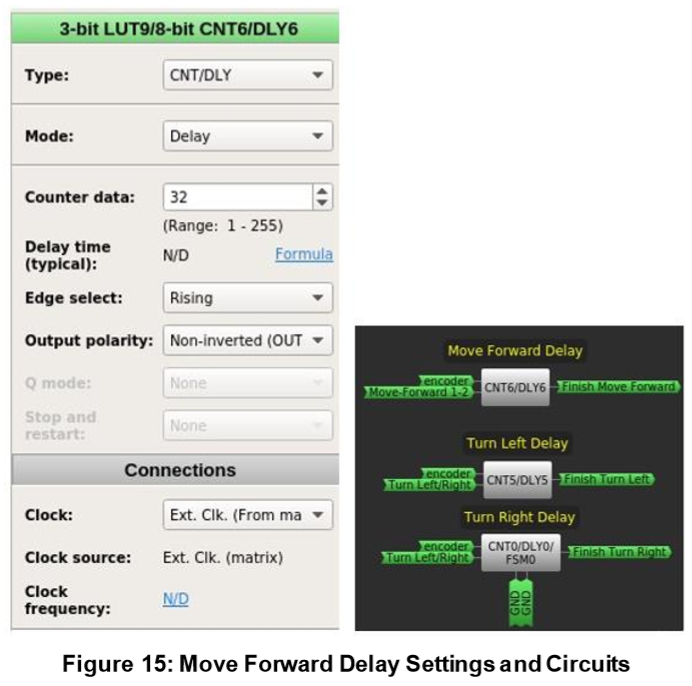 The outputs of these delay blocks are also connected to ASM inputs.

PWMs were used to adjust the speed of the motors. The ASM was used to determine what PWM the motor would run on. The PWMA-S and PWMB-S signals are set to the mux select bits. 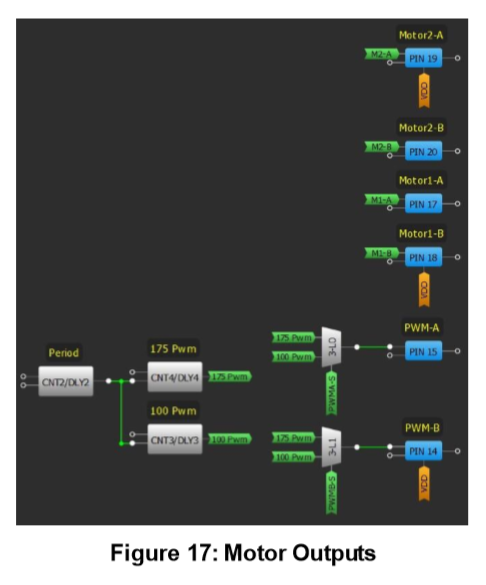 In this project, we used a Dialog GreenPAK SLG46531V to create a maze-solving robot. We interpreted data from multiple sensors, controlled the robotâ€™s state with the GreenPAKâ€™s ASM, and drove the motors with a motor driver. Generally, microprocessors are used in such projects, but a GreenPAK has a few advantages over an MCU: it is smaller, more affordable, and can process the sensor output faster than an MCU.