This article introduces the different types of capacitors available and the role each type of capacitor plays in design.

Like resistors, capacitors are the bread and butter of all electronic circuits and it is almost impossible to not have a capacitor in a practical circuit. Capacitors come in all shapes and sizes and are useful in specific scenarios depending on their type.

A capacitor is a component containing two electrically-separated plates. These plates can store charge and, depending on the circuit they are in, can be used to smooth out wobbles in power lines, remove DC voltages, remove AC voltages, and tune frequency circuits.

The material between the two plates is an electrical insulator and can be any material. However, the material chosen affects how the capacitor behaves. For example, electrolytic capacitors have an electrolyte between the plates which allows them to store more charge than ceramic capacitors but due to their larger ESR (equivalent series resistance), they take longer to deliver their charge.

Capacitors are always labeled with the symbol â€œCâ€ followed by a number. The number indicates which capacitor it is in the schematic.

Modern mass-produced electronics no longer use ceramic disc capacitors because they require manual insertion and soldering. They now use SMD (surface-mount device) ceramic capacitors that look like small beige blocks. Such capacitors are used in power line decoupling near ICs, analog circuitry, and for filtering AC/DC.

Examples of ceramic capacitors on PCBs.

It is entirely dependent on the manufacturer whether film capacitors have any detailsâ€”including their capacitance and part numberâ€”printed on them.

Unlike film and ceramic capacitors, polarized capacitors can hold large amounts of charge and find themselves most often in DC power situations including power supplies, welding equipment, buffering, and flashtube ignition. Polarized capacitors also come in different shapes and sizes and many are worth salvaging as they can be somewhat costly and difficult to obtain.

While aluminum electrolytic capacitors offer large capacitances at low prices they do have some issues. One of the biggest problems is their large ESR (equivalent series resistance), which makes them â€œslowâ€ to react to sudden changes.

Through-hole capacitor varieties can either be axial (component leads on the ends), or radial (component leads underneath), and have a negative strip that indicates which pin is the negative lead. They will almost always have information printed on them including their operating voltage and their capacitance.

Radial electrolytic capacitors may also have a special cross indent on the top metal disc; this is a pressure relief disc that ruptures if there is a fault and the capacitor begins to expand due to gas build-up.

SMD capacitor varieties are small tin cylinders with a small plastic square base. The negative lead is identified with the thick black mark on the top of the cylinder and these capacitors also have information printed on them.

Unlike the through-hole varieties these do not have the cross pressure relief system and this is most likely due to the fact that the low voltage / low capacitance combination means that during failure they produce little gas. 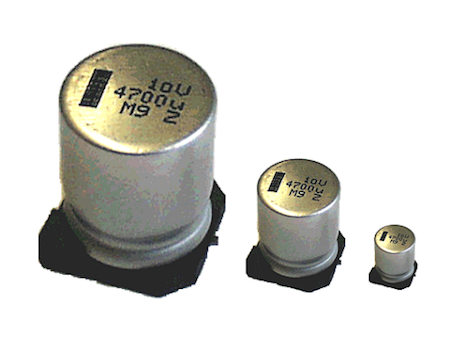 However, tantalum capacitors are very intolerant of reverse voltages and have been known to catch fire in some situations. They are also not able to handle ripple voltages too well and so designers must take extra care when using them in ripple applications.

SMD varieties of tantalum capacitors are more common in older designs (as early components could not handle reflow soldering) and are often rectangular with a yellow body. Through-hole varieties are also yellow and will be beaded in shape. The positive lead on the through-hole variety can be identified by the + marking above the positive pin and the SMD positive lead can be identified with the solid bar next to the connector. 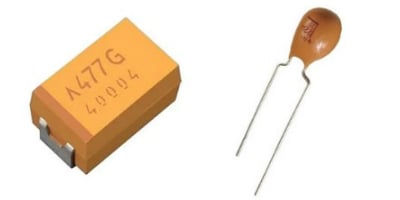